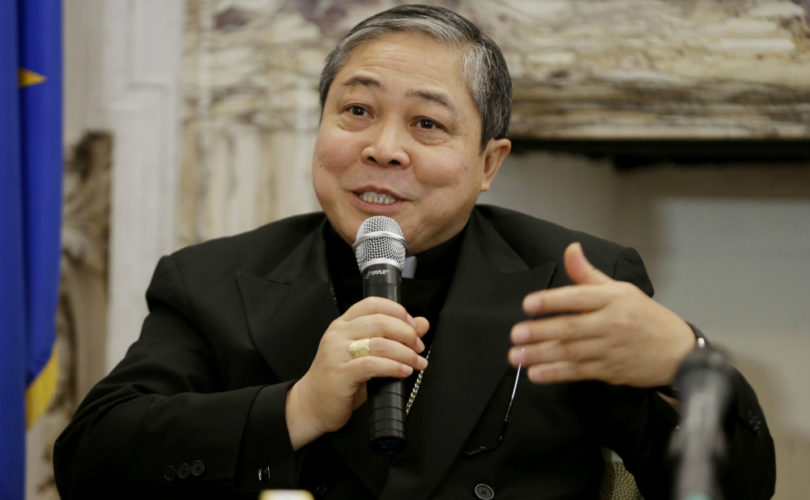 Archbishop Bernardito Auza decried the promotion of abortion as 'treatment' for war-time victims of sexual assault.

NEW YORK, April 21, 2015 (LifeSiteNews.com) — The Vatican’s United Nations envoy decried the promotion of abortion as “treatment” for victims of sexual assault in war last week, saying it propagates violence and thus negates the very mission of the UN.

Speaking at the Open Debate on Sexual Violence in Armed Conflict April 15, Archbishop Bernardito Auza, pointed to the steep rise in violence around the world as example, specifically citing terrorist groups Boko Haram and ISIS.

“Some are also attacks upon women and girls purely because of the faith they profess,” he said.

While the archbishop supported justice for women assaulted in conflict, including investigation, documentation and prosecution, he condemned killing their unborn children as a means of addressing sexual assault.

“It is always distressing … to see that some are still promoting the abortion of unborn children as part of the ‘treatment’ or response to the attack of their mothers,” the archbishop said. “This contradicts the peace and security mission of the United Nations, and proposes to meet violence with more violence.”

The following day at the April 16 48th Session of the Commission on Population and Development Archbishop Auza faulted UN emphasis on population growth as an obstacle to development.

“This has led to inordinate attention on issues that find no universal agreement,” Archbishop Auza said.

He specifically denounced forcing population control on other countries, saying, “We would do better to avoid the imposition of policies and subtle forms of coercion that do not respect the value systems of peoples and societies.”

“My delegation notes with concern the effects of the declining fertility rate combined with the declining mortality rate in developed countries,” he said. “The increasing burden that it places on social safety nets and health services is creating an alarming situation, in which our elderly and our youth are more and more vulnerable.”

The archbishop closed his second address before the UN by expressing the need for policies that recognize and support of the family and traditional family value systems, saying that people are the means of development.

“Shared prosperity is not achieved through selfishness. Stable societies are not built on individualism,” the archbishop said in conclusion. “Both are born out of a culture of solidarity that sees others not as rivals or mere statistics but as brothers and sisters, and recognizes the human person as the agent of and not the obstacle to development.”