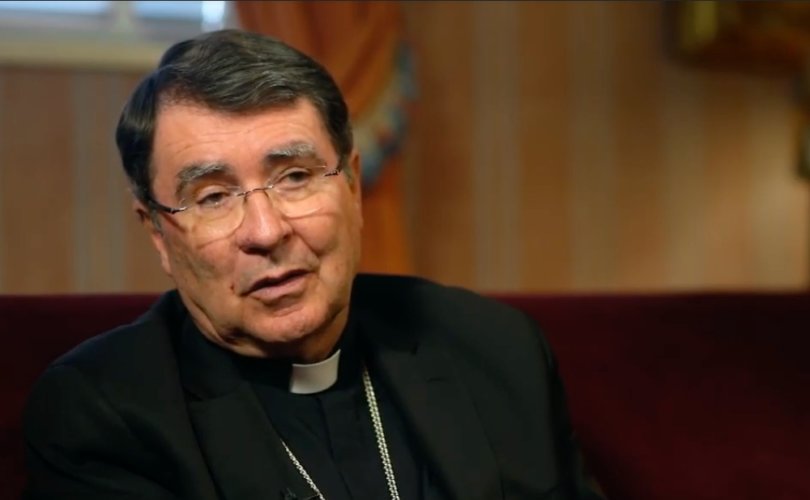 BALTIMORE, November 11, 2019 (LifeSiteNews) — The apostolic nuncio to the United States told the American bishops to get in line with the Holy Father and show they are taking steps to hand on the “Magisterium of Pope Francis” to their flock.

“The pastoral thrust of this pontificate must reach the American people,” Archbishop Christophe Pierre told attendees at the opening of the United States Conference of Catholic Bishops (USCCB) fall general assembly.

“Especially,” he added, “as families continue to demand of parishes and diocese the accompaniment envisioned by Amoris Laetitia.”

That’s Pope Francis’s controversial 2016 apostolic exhortation that has resulted in widespread confusion and differing positions between bishops on whether to allow divorced and remarried Catholics who are not known to be living as brother and sister to receive Holy Communion.

Pierre also exhorted the American bishops to make “greater efforts” to have the pope’s environmental message in Laudato Si’, already well received by young people, “reach the hearts of political and civil leaders.”

Moreover, to prepare for their ad limina visits with the pope, “it may be useful to prayerfully reflect on our communion with the Bishop of Rome … namely by measuring to what extent we and our local churches have received the Magisterium of Pope Francis,” Pierre said.

That includes making the pope’s first encyclical, Evangelii Gaudium, the “framework for efforts at evangelization,” he said.

“Adopting its missionary zeal and being in a permanent state of mission might represent tangible signs of communion with the Holy Father, for it shows the reception and implementation of his teaching as the key for missionary evangelization,” Pierre said.

The pope’s “emphasis on human fraternity” could “serve as a means for deepening the richness of American culture and creating an openness to the new waves of immigrants who are seeking a brighter future,” he added.

“Our communion with the Holy Father can be expressed in the concrete actions that we take to make his magisterium better known among our people,” the nuncio said (full text here).

And Whispers in the Loggia’s blogger Rocco Palmo went further, describing the nuncio’s remarks on Twitter as a “bomb-drop” and “woodshed” moment, a comment retweeted by EWTN’s Raymond Arroyo:

Notable line in Nuncio’s bomb-drop on bishops’ communion with Francis: “…families continue to demand of dioceses and parishes the accompaniment envisioned by Amoris Laetitia.”

This is a “woodshed” moment – unusually visceral for +Pierre, signaling a loss of patience. https://t.co/KRq1gQuuft

“The pope wants you to commit sacrilege by giving communion to unrepentant adulterers! Are you following his “Magisterium”???” https://t.co/UfgewM9obX

“Nope,” tweeted another. “We will continue to #RESIST this blatantly masonic agenda and its idol-worshipping globalist provocateurs. Even if they should wear white, scarlet or amaranth.”

Nope. We will continue to #RESIST this blatantly masonic agenda and its idol-worshipping globalist provocateurs. Even if they should wear white, scarlet or amaranth.

Time to ditch the ambiguous, now politicized “Magisterium.” We want the Deposit of Faith, passed on from the Apostles, not some Moscow Party Line that erases the past, imposed by the Ministry of Truth.

The USCCB will elect a new president and vice president during the four-day general assembly, which opened Monday in Baltimore.

The packed agenda includes voting on chairs for various committees, discussions on priestly formation and a ministry to Hispanic and Latino Catholics, and an expected update on the progress toward establishing a nationwide, third-party reporting system for abuse or misconduct by bishops, according to Vatican News.