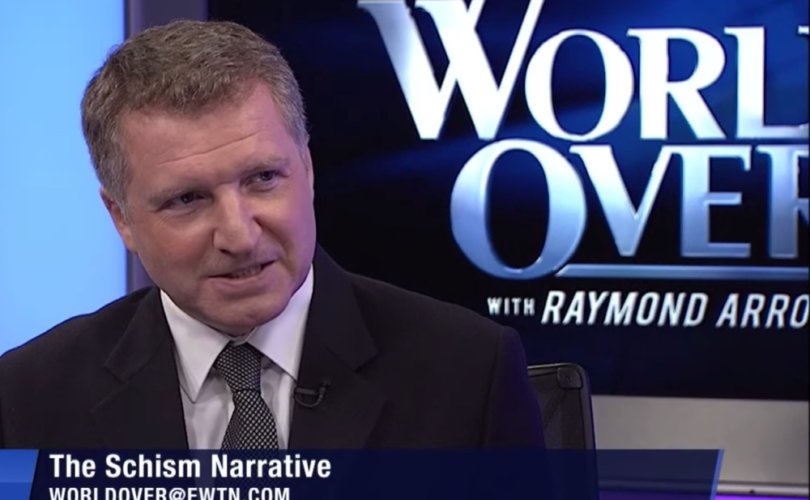 WASHINGTON, D.C., September 20, 2019 (LifeSiteNews) ― An EWTN host and his guests took aim at unfounded rumors of an American plot against Pope Francis last night, pointing out that a real schism appears to be happening in Germany, not America.

In speaking last night with Edward Pentin of the National Catholic Register and Damian Thompson of Britain’s The Spectator magazine, “The World Over” host Raymond Arroyo revealed a startling paradox: people are spinning a fantasy about an American schism while the German bishops openly defy the Vatican by having their own synodal assembly that has already been criticized for challenging the Church’s teaching on sexuality, priestly celibacy, and women in ministry.

“I am aghast at the lack of criticism from the same parties who are coming up with these tall tales and fabulous sagas of conspiracy theories in the United States and a well-financed cabal,” Arroyo said.

“But they completely ignore this German actual usurpation of papal power and authority,” he continued.

“They are becoming their own magisterium, and nobody is saying a word about this, even here in America.”

Given that the chairman of the German Bishops Conference is Cardinal Reinhard Marx, Arroyo indicated astonishment that he is still the head of Pope Francis’ financial oversight council, recently charged with coping with the Vatican’s deficit.

“Why is Marx running the Vatican finances while setting up a parallel Magisterium?” Arroyo asked.

Pentin suggested that the Vatican may be financially dependent on the German Church, and that this hypothesis is something that “a few of us” must look into. As for the source of the narrative regarding an “American plot”, he believes that it is coming from people close to Francis.

“It’s a complete slander and smear, and it’s complete lies that are coming out from around the Pope,” Pentin said.

“I’ve never seen this before,” the journalist continued. “I mean, it’s incredible to me.”

“Everything they say about this whole plot is a complete myth.”

Pentin related that he had recently told someone close to the “pope’s circle” that there was no plot against Francis and that all people want is truth and orthodoxy. In response, the insider said: “Oh well, it helps to sell books, you know.”

In addition to attracting sales, papal courtiers might be using the “American plot” narrative to “neutralize” critics, as they don’t know how else to deal with their criticism, Pentin suggested.

“This is a kind of desperate attempt, I think, to find a way to completely silence them.”

A number of books have been written containing versions of the well-financed cabal story, including papal biographer Austen Ivereigh’s Wounded Shepherd: Pope Francis and His Struggle to Convert the Catholic Church. Arroyo says that he doesn’t believe that these books will sell well because “no one cares.” Even serious Catholics are “tuned out” because of the endless financial and sexual scandals.

Pentin acknowledged that the “American plot” story has generated more interest in the European press than it has in the American, but said that many people “can see through it” and understand that critics of the direction the pontificate is taking are not against the Pope or the Church.

Damian Thompson, who suddenly ceased to be the editor-in-chief of Britain’s Catholic Herald after an earlier appearance on The World Over, mocked the American plot narrative while gently poking fun at EWTN’s and Arroyo’s part in it.

“This is what I call the ‘Cardinal Burke Staged the Moon Landings’ school of thought,” Thompson said.

“It’s the most complete rubbish. It’s a deliberately manufactured fantasy,” he continued.

“You’ve got this sort of Bond villain in a cappa magna and a sinister media network with a charismatic presenter.”

Thompson believes that the American plot narrative expresses the anger of “Team Francis”―an obsequious group of papal flatterers―that orthodox Catholicism is “vigorous” whereas liberal Catholicism is “moribund.” The cabal story also distracts attention from embarrassing problems in the Church, beginning with the upcoming Synod on the Amazon.

“It is there to distract attention from first of all the chaos over the Amazon Synod, which I think really embarrasses people like Austin Ivereigh and Massimo [Faggioli] who are reasonably well-educated and young enough to recognize this as antiquated 1960s nonsense,” he said, referring to the more problematic passages in the Working Document.

“[And] everybody wants to detract attention from what looks like an actual schism situation which is which is happening in Germany where the German church, which already has the unofficial authority to give communion to divorced people and Protestants, is now demanding some sort of binding national synod of bishops and lay associations,” Thompson continued.

“And that makes my flesh creep because I'm trying to think of what these lay associations might be like. Right ― so that's a real schism threat. And instead this fantasy schism is being created and it's an insult.”

Arroyo agreed that the “Black Legend” is a way to silence voices and to distract from what is really going on: “corruptions [and] innovations of Catholic thought and teaching and practice.”

Thompson also touched on the topic of the Vatican finances, which he called a “horror story.”

“The Vatican finances have always been not just a terrible mess but had a strong whiff of the mafiosi about them,” he said.

“And this is absolutely not something we started with this pontificate,” he continued.

“It’s one of the things that sadly destroyed the pontificate of Pope Benedict.”

Although he said he did not want to endorse a conspiracy theory, Thompson said “we should think” about the fact that Cardinal Pell, the man who was “going to clean up the Vatican finances” ended up “in jail in Australia on trumped-up charges.”

Thompson does not believe that Vatican financial corruption will be cleaned up during this pontificate. He stressed that Arroyo’s own American viewers are paying for the “chaos”, the sex abuse settlements and “money to be wasted on horrible projects like the Amazon Synod, for example.”

Arroyo closed their conversation with a call for a “complete forensic audit” of the Church’s finances, examining every parish and diocese in the world. He said he believed that this would reveal the “layers of corruption” that are usually attached to the mismanagement of money.

“They will reveal levels of corruption that we can hardly dream of,” Thompson stated.