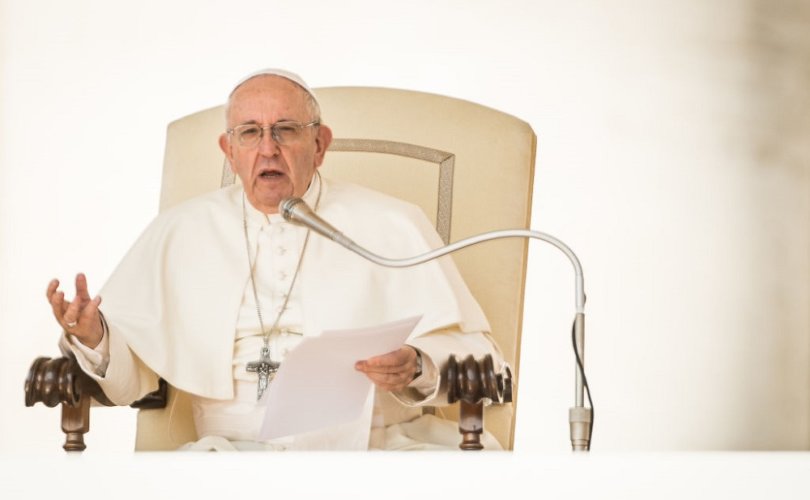 VATICAN CITY, April 9, 2020 (LifeSiteNews) — The Vatican thanked China Thursday for sending medical supplies to help it battle the COVID-19 virus, despite the fact that the virus originally originated in the communist country.

JUST IN: Vatican thanks “bishops, Catholic faithful, institutions and all Chinese citizens” for donations of medical supplies to Vatican from China. Calls it “expression of solidarity of the Chinese people & Catholic communities” with those fighting #Covid_19. Statement below. pic.twitter.com/7ZmZVstLi7

The Vatican press statement notes that the donations came through the Red Cross Society of China and the Hebei Jinde Charities Foundation, and that the supplies were “an expression of solidarity of the Chinese people and Catholic communities with those involved in the relief of those affected by COVID-19 and the prevention of the current coronavirus epidemic.”

The Holy See “appreciates this generous gesture and expresses its gratitude to the Bishops, the Catholic faithful, the institutions and all other Chinese citizens for this humanitarian initiative, assuring them of the esteem and prayers of the Holy Father,” it stated.

China expert Steve Mosher, who exposed the Communist Party’s forced abortion policy to the world, as well as its horrifying organ-harvesting protocols, took a different view.

“The Vatican should understand that it is dealing with Communist Party front organizations here, and perhaps temper its enthusiasms in general where all things China are concerned,” Mosher, president of the Population Research Institute, told LifeSiteNews in an email.

“The Chinese Red Cross, despite its name, has no connection with Christianity. It is a government-run organization in China which has recently been accused of taking donations intended for the suffering people of Wuhan in weeks past and diverting them for its own purposes,” said Mosher, author of the 2017 book Bully of Asia: Why China’s Dream Is the New Threat to World Order.

“Also, the quality of medical supplies from China should always be carefully examined before being used. The respirators don’t properly filter pathogens out of the air, while the test kits often produce false results,” he added.

Mosher told Fox News earlier this month that the medical equipment China is sending to European countries to combat the Wuhan virus is “literally junk” that “will not heal people. It will kill people.”

His statement was corroborated by mainstream media reports that Spain, Turkey, the Netherlands, Australia, and the Czech Republic have reported receiving defective and substandard supplies from China, as LifeSiteNews reported at the time.

Mosher has also stated elsewhere that evidence is mounting that the coronavirus escaped from a biomedical lab in Wuhan, that Communist leader Xi Jinping’s attempts to suppress news of the outbreak and refusal to act led in countless deaths in China and the virus’s subsequent rapid and catastrophic spread around the globe, and that Xi’s regime continues to lie about the devastation the disease has wrought in China.

That was echoed by Bishop Charles Maung Bo of Myanmar, reportedly the first religious figure to publicly accuse the Chinese Communist Party of being “morally culpable” for the pandemic, which Bo said has victimized the Chinese people and “destroyed lives all over the world.”

Moreover, the Holy See’s Thursday message of gratitude can be seen not only in the context of Beijing’s responsibility for the coronavirus, but in the Vatican’s 2018 widely criticized secret deal with China.

Overseen by Cardinal Pietro Parolin, Vatican secretary of state, the Vatican-China agreement gives Xi’s government a say in the appointment of bishops, among other concessions, and paves the way for unification of the state-sanctioned Chinese Patriotic Catholic Association (CPCA) and the underground Church, whose members have remained united to the Holy See despite the risk of being killed, imprisoned, and otherwise persecuted for their faith.

To implement the deal, the Vatican recognized and consecrated seven excommunicated CPCA bishops and requested two underground bishops who had faithfully served for decades under intense persecution to step down in favor of bishops recognized by the Communist Party.

Mosher condemned the agreement at the time as a “betrayal of the Catholic Church in China,” as did Hong Kong’s Cardinal Joseph Zen, and this January, a U.S. congressional report linked the secret deal to an “intense” spike in persecution of Christians not seen in China since the Cultural Revolution.

Since the agreement was signed, Xi’s regime began a campaign to eliminate the underground Catholic Church by forcing priests to sign a document attesting they will adhere to the state-run “Independent Catholic Church” that has led to arrests of priests who resist, the shutting down of their parishes, and ongoing persecution.

The irony of the Vatican’s reception of China’s medical supplies was not lost on Catholics on social media.

“Their 30 pieces of silver for betraying the Church in China…disgusting,” commented Fr. David M. Chiantella.

“The Vatican is lost. It's up to us to keep our faith strong. We can no longer rely on the leaders of our faith. They have been compromised,” commented Amme Grimaldi.

Meanwhile, Pope Francis issued a video message to Chinese Catholics in March encouraging them to be “good citizens” and not engage in “proselytism.”

“The Church wants Chinese Christians to be truly Christians, and to be good citizens,” the Holy Father said. “They should promote the Gospel, but without engaging in proselytism, and they need to achieve the unity of the divided Catholic community.”