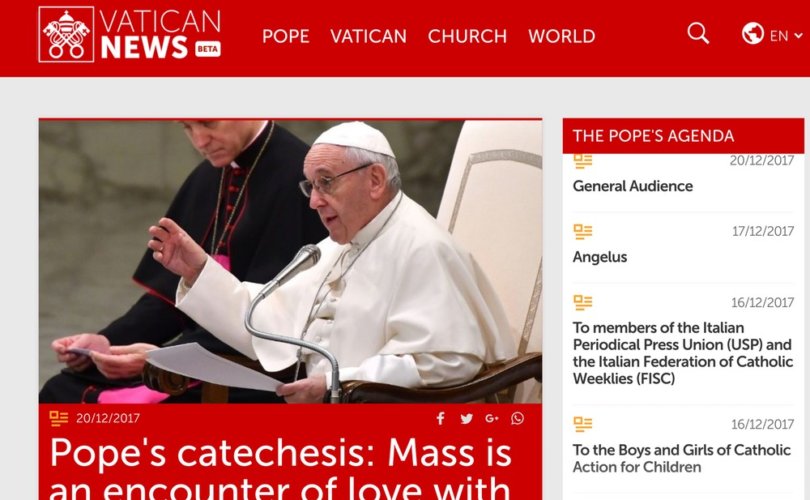 December 20, 2017 (LifeSiteNews.com) – Eyebrows are being raised following the announcement that a Vatican official with strong ties to LGBT activists has hired an openly homosexualist digital marketing company to design and manage the Holy See’s new internet news service.

The company, Accenture, is famous worldwide for promoting the homosexual political agenda, winning awards for being the top “gay friendly” employer, and producing videos proposing strategies for promoting “LGBT rights” throughout the world.

Accenture maintains an entire webpage of LGBT “pride” materials and a library of twelve LGBT videos on its website promoting homosexual “inclusion” in its company and in society in general. The company’s enthusiasm for pushing homosexuality was great enough to earn it the award for the most “gay friendly” company in all of Britain in 2013, and for being Ireland’s “best LGBT workplace” in 2016.

The company even signed a brief supporting the homosexual plaintiffs in the Obergefell vs. Hodges decision of the U.S. Supreme Court, which forced all fifty states to recognize gay “marriage.” It also contributes money to the “Human Rights Campaign,” an American gay lobbying organization which has in turn given the company a 100 percent pro-homosexual rating.

The new news service being created by Accenture will be called “Vatican News,” and will consolidate all existing communications channels used by the Vatican, including Vatican Media, Radio Vaticana, and the already-existing Vatican News, leaving only one channel of communications through online media. The beta version of the site can be found here.

Adweek Magazine reports that Accenture will be involved in “the creation of one multi-language editorial team able to work with a multimedia, multi-device and multi-cultural approach; and a content strategy that allows for efficient content management and distribution.”

“We are launching the last part of the reform sought by Pope Francis. Each reform does not originate from a mistaken past but from a present that calls for a change: in this case, today’s cultural and digital convergence require the adoption of production processes that are different from traditional ones,” said Monsignor Dario Edoardo Viganò, Prefect of the Vatican’s Secretariat for Communications.

“The collaboration with Accenture Interactive, thanks to their solid global experience, has allowed us to develop an extensive strategy capable of uniting various working groups, the diversification of formats and the strengthening of brand identity — all while maximizing the value of our talented in-house professionals working in the Holy See media.”

According to Diana, Accenture was not involved in any process of soliciting the contract. Rather Vatican officials approached Accenture of their own accord.

The revelation of Dario Edoardo Vigano’s no-bid contract with the homosexualist Accenture corporations follows a period of increasing support on his part for open homosexuals and homosexualist activists.

Viganò’s first major indication of his support for the gay agenda came with his appointment of the Jesuit priest James Martin as an adviser to the Secretariat of Communications earlier this year.

Martin has become widely known as an open advocate of the LGBT political and social agenda, claiming that the Catholic Church can “learn about love” from couples who practice sodomy, and should stop calling homosexual behavior “intrinsically disordered.” He has called on homosexual priests to “come out” of the closet, but refuses to say if he is a homosexual himself.

Viganò has also developed a close working relationship with a homosexual radio journalist, Pierluigi Diaco, who publicly celebrated his “civil union” to another man, according to the Italian journalist Marco Tosatti.

Tosatti notes in a recent article for La Nuova Bussola Quotidiana that Viganò has begun to appear regularly on Diaco’s radio program, and recently appeared with Diaco as a speaker at a recent conference on radio organized by the Italian embassy to the Vatican and held on December 15.

“Viganò and Diaco have known themselves for a while: in fact, since the current prefect has been a regular guest on the program which Diaco presents on RTL [radio], Non stop News,” writes Tosatti. “Every Monday, Viganò has a space with the show’s presenters called ‘Good morning, I am Francis,’ in which he talks about goings-on with the eyes of the reigning Pontiff. And precisely today [December 19], Viganò has opened the door to the presenters, with Diaco at the head, of the museum of Radio Vaticana. The live transmission, from 6 to 9 in the morning, was done from there.”

“Perluigi Diaco is a very well-known professional colleague who in early November celebrated his civil union with his partner, and which he has announced his homosexuality in a very sensationalist way,” Tosatti writes, adding, “We’re curious to know why, among hundreds of radio and television colleagues, precisely he has been chosen [to participate in the Italian embassy conference], whose personal story has transformed him into an icon of the LGBT struggle.”

Tosatti suggests an explanation, noting that “the chaplain of the Italian embassy to the Holy See is Mons. Pasquale Spinoso, an intimate friend of Dario Edoardo Viganò . . . since the days when they both worked in the Italian Episcopal Conference. . . . Well then, perhaps all of this isn’t such a coincidence as it might appear.”