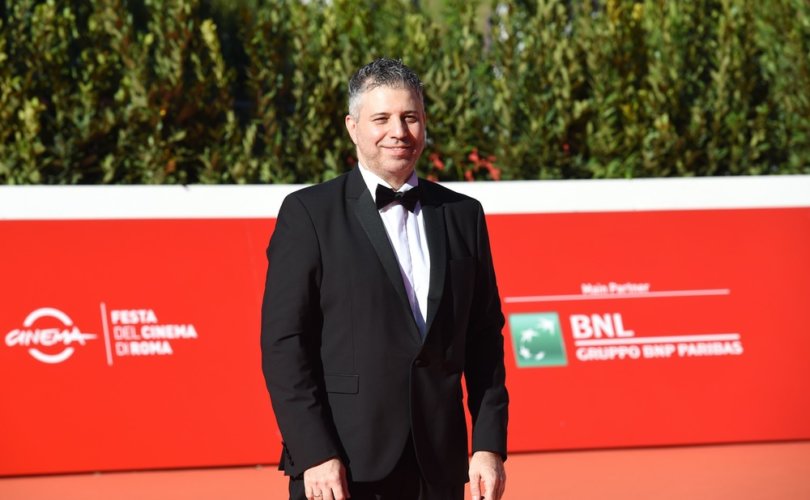 October 22, 2020 (LifeSiteNews) — Filmmaker Evgeny Afineevsky, whose new documentary Francesco on Pope Francis made headlines across the globe for the Holy Father’s comments on homosexuality and what appeared to be an endorsement of homosexual civil unions, was honored earlier today with an award in the Vatican gardens. Afineevsky is a homosexual himself.

“Afineevsky, who is gay, had expressed surprise after the premiere that the pope’s comments had created such a stir, saying Francis wasn’t trying to change doctrine but was merely expressing his belief gay people should enjoy the same rights as heterosexuals,” the Associated Press (AP) reported.

It is not yet clear how and why Afineevsky and Pope Francis started collaborating in the production of the documentary. In 2009, the Russian-born filmmaker released his feature directorial debut “Oy Vey! My Son Is Gay!” The movie received numerous awards from organizations supporting homosexuality.

“A romantic comedy featuring a Jewish family who struggles coming to terms with their son’s non-Jewish and gay boyfriend,” IMDb summarized the storyline. “When the gay couple adopts a child and it makes headline news, their families come to defend them and realize how much they love them.”

In the documentary released yesterday, Pope Francis said, “Homosexuals have a right to be a part of the family. They’re children of God and have a right to a family. Nobody should be thrown out, or be made miserable because of it.”

As first reported by the Catholic News Agency (CNA), the Pope also said, “What we have to create is a civil union law. That way they are legally covered. I stood up for that.”

Earlier today, Afineevsky received an award for his documentary in the Vatican gardens. The ceremony was attended by some Vatican officials. Generally, the award ceremony, which appears to be hosted by the Italian government, takes place in Venice.

“I’m so proud that finally ‘Francesco’ is on its way to the world to change hearts and minds,” the filmmaker said, CNA reported. “I’m happy that I can bring the voices of the Rohingya refugees, refugees from Syria, voices of victims of sexual abuse, voices from different points and from different corners of the world. Something that Pope Francis really cares [about] and something that is really deeply in my heart.”

AP pointed to another element of confusion regarding the Pope’s comments on homosexuality, suggesting that he could have made those remarks during a 2019 interview with Mexican broadcaster Televisa. The interview “was never broadcast in its entirety.”

“Televisa has not confirmed that the comments were made during its interview, but the scene of the documentary is identical to the Televisa interview, including the yellow background, a chair in the corner and slightly off-center placement of the chain of Francis’ pectoral cross,” the article pointed out.

“The official 2019 Vatican News transcript of that interview, as well as the official Vatican edit, contains no such comment on the need for legal protections for civil unions. The official edit does include his comments on the need for gay people to feel they are part of a family, as he has said previously.”

According to the article, “some version of the footage was apparently available in the Vatican archives, which were opened to filmmaker Evgeny Afineevsky.”

However, “Afineevsky, when pressed by reporters late Wednesday, said the pope made the comments to him directly, through a translator, but declined to say when,” AP added.

The Holy Father’s comments, regardless of their origin, were praised by secular observers all over the world. For instance, the Secretary-General of the United Nations, António Guterres, said the statement “is, of course, extremely welcome from our perspective.”

At the same time, several cardinals and bishops have come out defending traditional Church teaching on homosexuality.

“Basing itself on Sacred Scripture, which presents homosexual acts as acts of grave depravity, Tradition has always declared that ‘homosexual acts are intrinsically disordered’ … inasmuch as they are contrary to the natural law, closed to the gift of life and void of a true affective and sexual complementarity. Therefore, they cannot be approved,” explained Cardinal Raymond Burke.

“The faithful, and, in particular, Catholic politicians are held to oppose the legal recognition of homosexual unions,” he continued. “The right to form a family is not a private right to vindicate but must correspond to the plan of the Creator Who has willed the human being in sexual difference, ‘male and female He created them’ (Gen 1, 27), thus calling man, male and female, to the transmission of life.”

“‘Because married couples ensure the succession of generations and are therefore eminently within the public interest, civil law grants them institutional recognition. Homosexual unions, on the other hand, do not need specific attention from the legal standpoint since they do not exercise this function for the common good.’ To speak of a homosexual union, in the same sense as the conjugal union of the married, is, in fact, profoundly misleading, because there can be no such union between persons of the same sex.”

Burke said the statements in the documentary Francesco “do not correspond to the constant teaching of the Church, as it is expressed in Sacred Scripture and Sacred Tradition, and is guarded, protected and interpreted by the Magisterium. Equally sad and concerning is the turmoil, confusion, and error they cause among the Catholic faithful, as is the scandal they cause, in general, by giving the totally false impression that the Catholic Church has had a change of course, that is, has changed its perennial teaching regarding such fundamental and critical questions.”

Cardinal Gerhard Müller, the former prefect of the Congregation for the Doctrine of the Faith, said, “I do not know the exact wording of the interview statement, which is ambiguous as so often. But the effect is fatal.”

“The Catholic faithful are irritated, the enemies of the Church feel confirmed by the Vicar of our Lord Jesus Christ, whom they reject as the Son of God,” he summarized. “Instead of using theological and philosophical arguments of reason, they appeal to feelings, thus checkmating the rationality of faith with sentimentality.”

“The present statement [of Pope Francis] is a purely private expression of opinion, which every Catholic can and should freely contradict,” Müller said.

During October of last year, it was in the Vatican gardens that Pope Francis was presented with a Pachamama statue as part of activities related to the Amazon Synod.