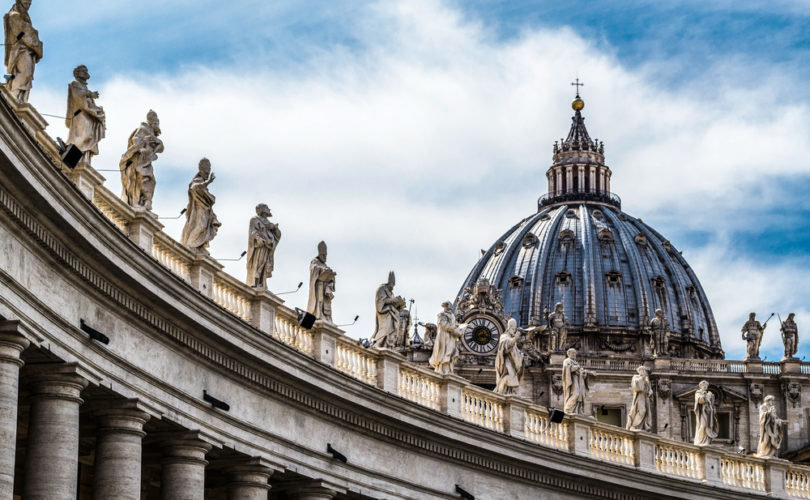 VATICAN CITY, May 11, 2021 (LifeSiteNews) — A new group in the Vatican has been tasked with the excommunication of all members of mafia groups, but pro-life advocates have noted the irony of how similar sanctions are not being placed on abortion supporters, particularly politicians who support the killing of the unborn.

Under the overall directive of Cardinal Peter Turkson, who heads the Dicastery for Promoting Integral Human Development, a working group has been drawn up that reportedly will have as its aim the excommunication of members of the mafia and organized crime groups.

The new group’s birth coincides with the beatification of Rosario Livatino, an Italian judge killed by gunmen in 1990 on the orders of two Sicilian Mafia groups. Livatino was working on a mass trial against members of the mafia when he was killed by four gunmen.

His beatification took place in Sicily on Sunday, May 9, with Cardinal Marcello Semeraro, Prefect of the Congregation for the Causes of Saints, presiding at the ceremony.

Speaking of Blessed Livatino at the Sunday Angelus, Pope Francis stated that “his work placed him firmly under the protection of God. For this reason, he became a witness to the Gospel even unto a heroic death.”

It is in his honor, writes the Dicastery, that the working group has been set up, and it will seek to collaborate with bishops across the world in order to achieve its goals of excommunicating the mafia members.

The group itself is to be made up of Archbishop Michele Pennisi of Monreale, Italy; Giuseppe Pignatone, president of the tribunal of Vatican City State; Father Luigi Ciotti, president of Libera, an association that coordinates the work of anti-mafia groups; Rosy Bindi, former president of the Italian parliament’s anti-mafia commission; Father Raffaele Grimaldi, head of the Italian government’s prison chaplain service; Father Marcello Cozzi, a professor at Rome’s Pontifical Lateran University long involved in efforts to fight poverty and mafia affiliation; and Msgr. Ioan Alexandru Pop, an official at the Pontifical Council for Legislative Texts.

The new step in the Church’s fight against the mafia and similar crime groups is built on the back of the condemnation of such organizations by Pope John Paul II and Pope Benedict XVI. John Paul II famously attacked the mafia in 1993 when visiting Sicily, warning: “Convert! One day, God’s judgement will come!”

His words were echoed by Pope Emeritus Benedict XVI in 2010, calling the “suggestions of the Mafia” a “way of death,” and saying that such a life was “incompatible with the Gospel.” Pope Francis himself has also weighed in by criticizing and attacking members of the mafia, warning that they could find themselves in hell if they did not convert.

Attention to mafia, but not Catholic moral teaching

However, pro-life advocates have noted the peculiar attention which has been given to dealing with members of the mafia, while the Vatican simultaneously studiously avoids combatting the issue of abortion supporters, particularly the scandal caused by pro-abortion “Catholic” President Joe Biden.

In fact, despite his own protestations that he does “nothing other than let the world know” his position on abortion,” Pope Francis has a confusing track record on the subject of abortion, and has repeatedly deepened his relations with supporters of abortion, and appointed them to positions within the Vatican and the curia.

In the first year of the Pope’s pontificate, he gave an interview in which he said abortion was talked about too much in the Church. “We cannot insist only on issues related to abortion, gay marriage, and the use of contraceptive methods. This is not possible,” he said. “I have not spoken much about these things, and I was reprimanded for that.”

In 2016, the year in which he made his famous comments comparing large Catholic families to “rabbits,” Francis abolished the pro-life declaration that had previously been a requirement for members of the Pontifical Academy for Life and subsequently appointed members to the academy who supported abortion.

While the issue of the mafia is clearly something to which the Vatican, and Pope Francis, are giving some attention, the issue of support for and promotion of abortion by Catholics is left largely unchallenged. More than this, Pope Francis has allied himself with some of the most promoters of abortion worldwide. Mere days after the U.S. presidential election 2020, he telephoned Joe Biden, “extending blessings and congratulations” to the pro-abortion and pro-LGBT politician.

Late in 2019, Biden evidenced the depth of relation which he enjoyed with Pope Francis, despite his rejection of Church teaching regarding abortion. After Biden was denied receiving Holy Communion by a priest, in accordance with canon law, Biden stated, “It’s not a position that I’ve found anywhere else, including from the Holy Father, who gives me Communion.”

The Pope also has sided with the United Nations (UN) and its 2030 Agenda for Sustainable Development, which is heavily pro-abortion. He expressed support for the U.N.’s Goals, even though they call for “universal access to sexual and reproductive health care services, including for family planning, information and education, and the integration of reproductive health into national strategies and programs,” which includes contraception and abortion

Vatican double standards for “one category of Catholics”

In its dealings with the U.S. bishops and their own relationship with pro-abortion President Biden, the Vatican has not been reticent to intervene in defense of Biden, expressing a marked difference in its recent and upcoming condemnation of the mafia.

In January, the Vatican ordered the U.S. Conference of Catholic Bishops (USCCB) to hold back a statement on then-incoming President Biden that called attention to his pledge to pursue anti-life and anti-family policies that would advance “moral evils” in the areas of “abortion, contraception, marriage, and gender.” The statement was only allowed to be released after Pope Francis first extended his “cordial good wishes and the assurance of my prayers” to Biden.

Adding further fuel to the accusations of double standards, the Vatican has recently weighed in to the discussions currently underway in the USCCB, regarding the distribution of Holy Communion to pro-abortion politicians.

A letter sent to the USCCB president by Cardinal Luis F. Ladaria, the prefect of the Congregation for the Doctrine of the Faith (CDF), warned that an upcoming USCCB policy on giving Holy Communion to pro-abortion politicians, such as Biden, could be a “source of discord.”

Cardinal Ladaria said the policy would unfairly concentrate on “only one category of Catholics.”

Despite its reticence to target this “one category of Catholics,” the new working group on the mafia looks set to also target one specific kind of Catholic. LifeSite contacted the Dicastery for Promoting Integral Human Development, seeking more information about the working group, but was informed that details would be conveyed in the upcoming weeks.