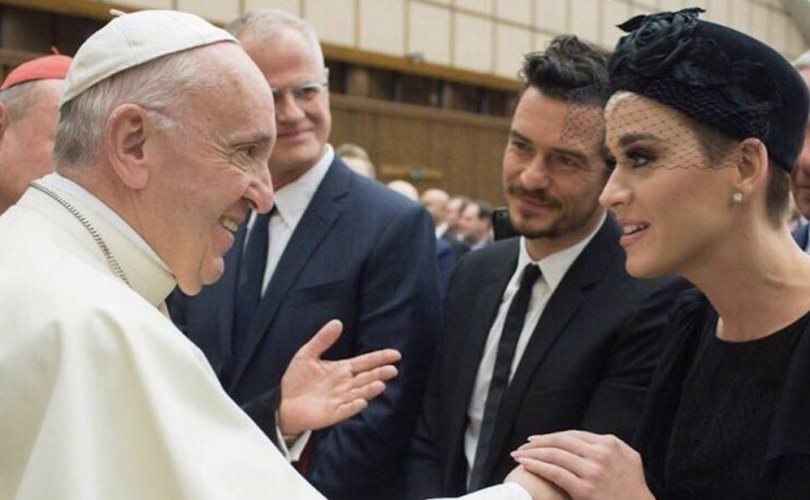 VATICAN, May 2, 2018 (LifeSiteNews) — A Vatican conference has wrapped up featuring controversial pop-star Katy Perry speaking on transcendental meditation, disgraced Lettergate monsignor Dario Viganò delivering a talk on “Fake News,” and a “meditating eye” charm bangle given as a gift to select participants.

The gathering, called “Unite to Cure — How Science, Technology and the 21st Century Will Impact Culture and Society,” has been described by some as the “Davos of biotech,” due to its similarities with the high-level World Economic Forum in the Swiss ski resort.

The Fourth International Vatican Conference had several positive aims and featured talks from a wide-ranging panel of experts from the fields of medicine, business, media, and technology.

An odd mingling of wealthy investment bankers, celebrities, biotech leaders and Vatican officials, its stated goal was to “unite people without prejudice to stimulate an open dialogue and catalyze an interdisciplinary approach to tackle major health care challenges around the globe.”

The conference is the fourth the Vatican has helped stage since its start in 2011 under Pope Benedict XVI.

However, this year’s gathering has upset many Catholics who are scandalized that the Vatican is giving a platform to those promoting non-Christian practices, and particularly the participation of controversial pop-star Katy Perry who took part in a discussion on promoting Transcendental Meditation among children.

On day three of the Vatican conference, Perry joined a discussion on “Impacting Children’s Health Through Meditation Globally” with her mentor, Bob Roth, CEO of the David Lynch Foundation. Roth is also the mentor to Oprah Winfrey and Dr. Oz on Transcendental Meditation, or TM (see video below).

Roth’s organization was connected to the “meditating eye” charm bangles that were distributed to some participants at the beginning of the conference (proceeds from the bangles go to teaching Transcendendal Meditation to veterans, urban youth and women who are victims of domestic violence). Also in the gift pack was a book promoting Transcendental Meditation that the Vatican tried to block. “They did manage to distribute these gifts through (at least) one hotel where some conference participants were staying,” said a Vatican official involved with the event. “Many other guests distributed their own materials to fellow attendees, as is the nature of these events.”

Perry, who later was treated to a royal tour of the Vatican by Archbishop Paul Tighe, secretary of the Pontifical Council for Culture, also met the Pope, accompanied by her boyfriend, the movie actor, Orlando Bloom, and Perry’s mother.

Honored to be in the presence of His Holiness @Pontifex's compassionate heart and inclusivity. Thank you to @meditationbob and #TheCuraFoundation for making it all possible.❤️��#UniteToCure pic.twitter.com/EEPWJI2gkT

“For Katy Perry to speak about Transcendental Meditation from the same seat used by the Pope during major Church meetings is symbolic of the chaos, disorientation and scandal that marks this pontificate,” a source close to the Vatican told LifeSiteNews. “It would be one thing to have her presence moderated by a Church leader, but to have the podium given over to celebrity TM proponents with no Church voice to counter them is unconscionable.”

The source added: “It’s tragically emblematic of today’s culture: when the Church chooses to be absent, the world steps in to fill the vacuum.”

An official in the Pontifical Council for Culture told LifeSitenews the plan was for the guests promoting transcendental meditation to be able to air their ideas which would then be “robustly challenged” — an exercise, he said, that would educate Catholic participants attending the Conference about the nature of some of the current challenges to the Faith in healthcare settings.

Despite these aims, the ideas were not robustly challenged during or after the panel discussion.

In a letter to bishops issued by the Congregation for the Doctrine of the Faith in 1989, Cardinal Joseph Ratzinger warned against Transcendental Meditation, saying “it can degenerate into a cult of the body and can lead surreptitiously to considering all bodily sensations as spiritual experiences.”

In 2003, the Pontifical Council for Culture issued a Christian reflection on the “New Age,” which similarly warned: “Many people are convinced that there is no harm in ‘borrowing’ from the wisdom of the East, but the example of Transcendental Meditation (TM) should make Christians cautious about the prospect of committing themselves unknowingly to another religion (in this case, Hinduism), despite what TM’s promoters claim about its religious neutrality.”

“I Kissed a Girl”

Why are some Catholics so disturbed by Katy Perry’s invitation to speak at the Vatican?

Katy Perry, 33, rose to fame in 2008 with her lesbian-themed single “I Kissed a Girl.” Sparking controversy for its homosexual themes, Perry has performed the song on all of her concert tours. It was nominated for Favorite Song at the 2009 Kids’ Choice Awards.

“Truth be told, I did more than that,” Perry proclaimed after receiving the Human Rights Campaign’s National Equality Award for her LGBT activism in March 2017. “But how was I going to reconcile that with the Gospel-singing girl raised in youth groups that were pro-conversion camps,” the daughter of traveling Pentecostal preachers told the crowd.

A self-professed “spotlight” for LGBT rights, earlier this year Perry said she would edit the lyrics of “I Kissed a Girl” to get rid of the “stereotypes,” telling Glamour magazine: “We’ve changed, conversationally, in the past 10 years. We’ve come a long way. Bisexuality wasn’t as talked about back then, or any type of fluidity.”

And just days after meeting Pope Francis, Perry celebrated the 10th anniversary of the song on Twitter, saying:

Katy Perry, the most followed person on Twitter with 109 million followers, has also been embroiled in a real estate battle with the Sisters of the Most Holy and Immaculate Heart of the Blessed Virgin Mary, in a bid to buy their California convent.

The pop-star sought to buy the 8-acre property and its Roman-villa style buildings in the city’s Los Feliz neighborhood for $14.5 million, and to relocate an adjoining house of prayer used by Catholic priests.

The archdiocese of Los Angeles has approved the sale to Perry contrary to the wishes of the sisters who owned the property.

California entrepreneur Dana Hollister stepped in, in an attempt to buy the property from the sisters, but a judge voided the sale in early 2017, saying the archdiocese had the right to sell the property, not the sisters.

Last December, a jury found that Hollister should pay the archdiocese $3.47 million and Perry $1.57 million for interference with contractual relations and other misdeeds.

Perry and the archdiocese are still working out the terms of the sale. The archdiocese needs permission from the Vatican to finalize it.

One of the sisters, Sr Catherine Holzman, 89, collapsed and died two months ago during related legal proceedings in a Los Angeles County Court. The sisters said it would be a “sin to sell to” Perry, who once said she sold her soul to the devil to gain success in the music industry.

Katy, Cannibalism and the Occult

In one of her music videos she promotes cannibalism, with clear connections to occult practices of certain Democrats in Washington DC.

In the video “Bon Appétit,” [Warning: it is not advised to watch it] Perry is cooked by chefs and offered as a meal to a party of elite guests as the main course. The video ends with Perry about to eat a pie containing body parts of the guests.

“This is clearly Satanic activity and Katy Perry is bound up with it,” a moral theologian who wished to remain anonymous told LifeSiteNews.

In 2016, Perry donated $10,000 to abortion provider Planned Parenthood and urged her followers to do the same.

Announcing her contribution on Instagram, Perry said, “It’s time to turn words into action” and said the first step is to support these sorts of organizations.

She continued: “I am making a public donation to Planned Parenthood for the teenage me who made several visits to first a clinic in Santa Barbara, and then Los Angeles, CA to educate myself on my sexual health, a subject I had little to no information on because of my sheltered upbringing. I had no idea how things worked down there, and had no idea how to make a plan for them.

“I am grateful for and stand in support of Planned Parenthood for giving Katheryn Hudson [Katy Perry’s real name] the knowledge to plan, and for continuing to be a haven for women to learn all options for their future. Now, more than ever, we all need to protect and create safe places for each other. I hope I can help inspire you to make a gift as well, and become a member and an ally,” she told her followers.

Some critics of Perry’s visit to the Vatican say that meditation is not the real issue.

They argue that if meditation is just thinking about positive thoughts as a way to calm the mind, it is not necessarily bad in itself, but by adding Katy Perry, who has the occult attached to her, other elements sneak in.

“Some of the people are naive, some are wicked,” said the moral theologian. “Those who are naive are following Vatican II’s, ‘Let’s find the common denominator that unites us.’ Other wicked people are using this, and are seeking to find harmony in society without Christ.”

For the devil, the fact that Perry is a pastor’s daughter is “an added victory,” the theologian said.

“The issue isn’t the issue. The revolution is the issue. Katy Perry’s visit to the Vatican to talk about meditation is one way to promote the revolution, which is a world without Christ,” he said.

LifeSiteNews contacted the Pontifical Council for Culture to ask why Perry was an invited speaker, but has received no response.