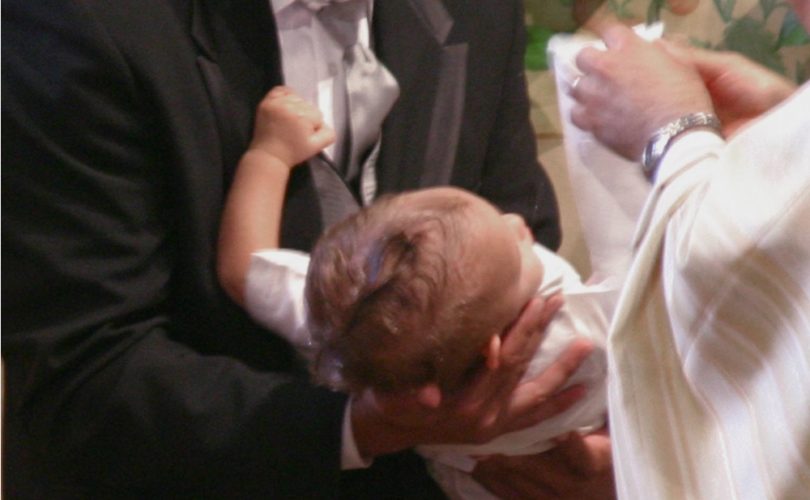 MADRID, September 2, 2015 (LifeSiteNews)- After Alex Salinas, a woman living as a man in San Fernando, Spain, claimed her parish priest had allowed her to be the “godfather” for the baptism of her two nephews, local bishop of Cadiz and Ceuta, Don Rafael Zornoza took the matter up with the Congregation for the Doctrine of the Faith. The response, which strongly affirms Church teaching on the nature of gender, was published yesterday on the diocese’s website.

“On this particular case I inform you of the impossibility of admission,” read the response. “Transsexual behavior publicly reveals an opposition to the moral demand of resolving the problem of sexual identity according to the truth of one’s own sex. It is therefore evident that said person does not comply with the requirement of leading a life of faith and to the function of godparent (CIC, can 874 §1,3).”

“This is not seen as discrimination, but merely as the recognition of an objective lack of requirements that by their nature are necessary to take on the ecclesiastic responsibility of being a godparent,” it concluded.

The prelate explained how Pope Francis has confirmed this doctrine on several occasions and quoted his last encyclical Laudato Si: “Human ecology also implies another profound reality: the relationship between human life and the moral law, which is inscribed in our nature and is necessary for the creation of a more dignified environment.”

Bishop Zornoza also quoted Benedict XVI on the “ecology of man,” as “man too has a nature that he must respect and that he cannot manipulate at will.”

“The acceptance of our bodies as God’s gift is vital for welcoming and accepting the entire world as a gift from the Father,” continued Zornoza quoting Francis. “Thinking that we enjoy absolute power over our own bodies turns, often subtly, into thinking that we enjoy absolute power over creation. Learning to accept our body, to care for it and to respect its fullest meaning, is an essential element of any genuine human ecology.”

The bishop went on to explain that if parents are unable to find a suitable person to qualify as godparent, the priest can baptize the child without godparents, “which are not necessary to celebrate this sacrament.”

“Words have been attributed [to me] which I have not pronounced,” he noted, referring to the media falsely reporting his approval of Salinas as godfather. He explained he had reached out to the Congregation “due to the complexity and the media relevance this matter has reached, and keeping in mind the possible pastoral consequences of any decision on the matter.”

Local media reported that the baptism, scheduled for this September, has been cancelled, and that Salinas’ sisters will not baptize their children until the bishop changes his mind.

Salinas, who had declared herself to be a “firm believer,” has now claimed to be an “apostate” due to the Church’s rejection, reported Spain’s EFE.

In a petition started by change.org, Salinas wrote she didn’t understand why “the Catholic Church denies me the possibility of being a godfather” if Spanish authorities have already changed her name from Alexandra to Alexander in her official IDs.

The petition falsely celebrated a “victory” after Salinas claimed she was being allowed as godfather.

Mainstream media, which initially reported Salina’s “celebration,” have not yet reported on the Congregation for the Doctrine of the Faith’s response.