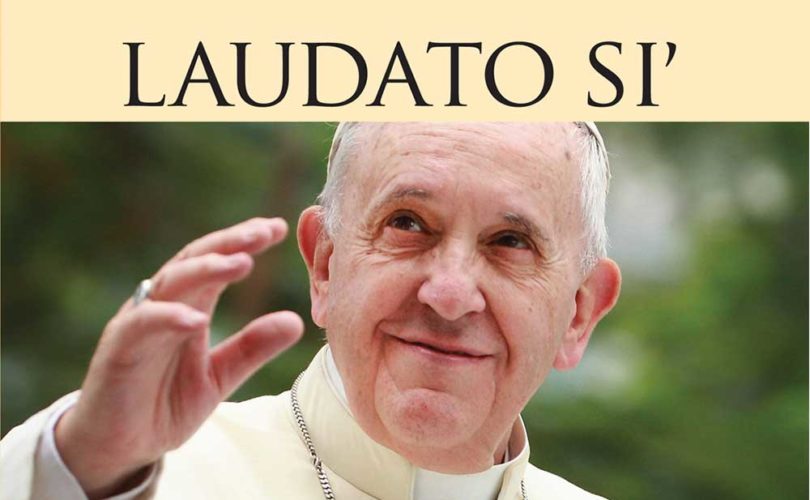 ROME, June 19, 2019 (LifeSiteNews) — In a letter released on Tuesday by the Vatican’s Dicastery for Promoting Integral Human Development, Christians were called to put Pope Francis’s Laudato Si’ encyclical on the environment into practice.

Catholics, Orthodox, Anglicans, and other Protestant ecclesial groupings are being urged to celebrate September as a “Season of Creation” to press for action on the doctrine of climate change. “During the month-long Season of Creation, Christians on six continents work to put Laudato Si’ into practice,” says the letter, which was released on Tuesday by the dicastery. The dicastery asks Christians to “participate in community events to deepen their love for the Creator, creation, and each other.”

The events will be held Sept. 1–Oct. 4 and will include worship services and prayers in addition to a push to limit global warming to 2.7 degrees Fahrenheit (1.5 degrees Celsius).

Released by the pope in 2015, Laudato Si’ was widely believed to have influenced the international negotiations that led to the signing of the Paris Accord on global warming at the end of that year. In the encyclical, the pope deplored the harm inflicted by “our irresponsible use and abuse of the goods with which God has endowed [the earth]. We have come to see ourselves as her lords and masters, entitled to plunder her at will. The violence present in our hearts, wounded by sin, is also reflected in the symptoms of sickness evident in the soil, in the water, in the air and in all forms of life.”

Biggest #climatestrike yet – during #SeasonOfCreation. Time to get every parish in Ireland out. �� https://t.co/QUdmJ5zp3H

The letter from the dicastery, signed by Msgr. Bruno Marie Duffie, said that the theme for this year is “the web of life,” with an emphasis on humanity’s role as a custodian of biodiversity. The letter noted that the Season of Creation is closely connected to the Synod of Bishops for the Pan-Amazon region, to be held this October, scheduled to commence just two days after the Season of Creation comes to a close.

Coincidentally, the Vatican released on Monday the instrumentum laboris, or preparatory document, for the Pan-Amazon Synod. The Amazonian region, according to the document, is “at risk” for “environmental destruction and exploitation,” besides “the systematic violation of the basic human rights of the Amazonian population.” The instrumentum claims that climate change and increased human activity in Amazonia are reaching a “point of no return” of desertification, population displacement, and environmental contamination.

Biodiversity and the “web of life” are the themes for this year’s observance, suggested by the Ecumenical Steering Committee. According to the executive secretary of the Pan-Amazon Ecclesial Network (REPAM) Mauricio López Oropeza: “The Season of Creation is an opportunity to reflect on the ways in which we love cultures in all their diversity, especially the diversity of communities in the Amazon. It is an opportunity to love the face of God and how it presents itself in the Amazon.”

Last year, Cardinal Peter Turkson, who heads the Vatican’s development dicastery, co-signed a letter from several faith leaders urging Christians to participate in the Season of Creation. The co-signers included Archbishop Job of Telmessos on behalf of Ecumenical Patriarch Bartholomew; Archbishop of Canterbury Justin Welby, head of Anglican Communion; and Reverend Olav Fykse Tveit, the general secretary of the World Council of Churches.

Noting that the Season of Creation was first recognized by Ecumenical Patriarch Bartholomew, the co-signers wrote that Christians are called to take “bold action to preserve the gift we share.” They called on Christians to ask themselves, “Do our actions honour the Lord as Creator?  Are there ways to deepen our faith by protecting ‘the least of these,’ who are most vulnerable to the consequences of environmental degradation?” With hands joined “across denominations as sisters and brothers in Christ,” they said Christians may “walk together towards greater stewardship of our place in creation.”