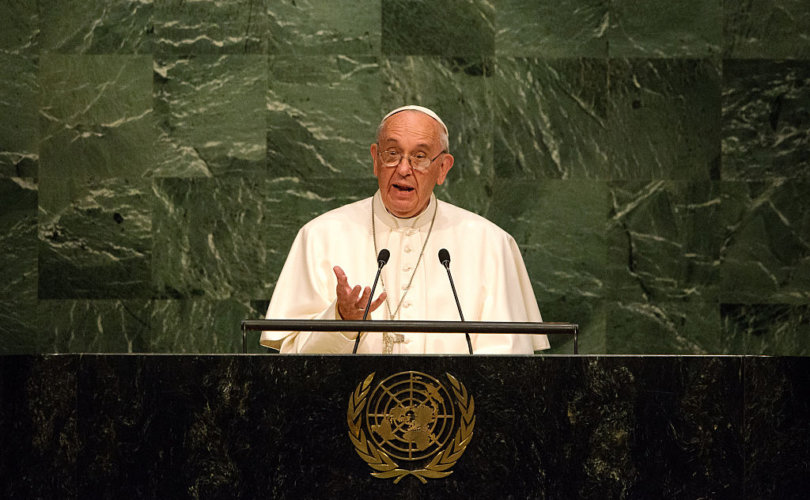 Pope Francis delivers an address to the General Assembly of the United Nations on September 25, 2015 in New York City.Bryan Thomas/Getty Images

VATICAN CITY (LifeSiteNews) – The Vatican announced today that it has formally joined the Paris Climate Agreement, known for its underlying abortion and population control agenda.

A statement issued by the Holy See Press Office said that Archbishop Gabriele Giordano Caccia, Permanent Observer to the U.N., on June 6 deposited before the Secretary-General of the United Nations the Holy See’s Instrument of Accession, the formal document by which the Vatican joined the Paris Climate Agreement.

“The Holy See,” the statement reads, “in the name and on behalf of Vatican City State, intends to contribute and to give its moral support to the efforts of all states to cooperate … in an effective and appropriate response to the challenges posed by climate change to humanity and to our common home.”

The Vatican claims that in joining the Paris Agreement it is expressing its solidarity with the poor and future generations as those most affected by “climate change.”

As LifeSiteNews has previously reported, however, it has long been noted by pro-life advocates, that the 2015 Agreement includes an underlying agenda to push abortion, contraception, and sterilization as necessary means of controlling the population and minimizing human consumption and use of the earth’s resources. The way such things are imposed on poorer countries is by linking them to desired funds and resources.

In text of the Agreement, such issues are cloaked in phrases such as “gender equality” and “empowerment of women,” and are joined to the presumed need to address climate change in a “toss in everything” approach. The Agreement states:

Pro-life advocacy group Voice of the Family pointed out in 2015 when the Climate Agreement was first drafted that the U.N.’s “Sustainable Developments Goals use ‘gender equality’ and ’empowerment of women’ to advance abortion and contraception.”

Again in 2020 the Pope said of the agreement, “We need to do everything in our capacity to limit global average temperature rise under the threshold of 1.5°C enshrined in the Paris Climate Agreement, for going beyond that will prove catastrophic, especially for poor communities around the world.”

Today’s announcement comes only one day after the European Union adopted a resolution titled “US Supreme Court decision to overturn abortion rights in the United States and the need to safeguard abortion rights and Women’s health in the EU,” in which the E.U. defends abortion as a “fundamental human right” and “calls on the governments of those states which have passed laws and other measures concerning bans and restrictions on abortion to repeal them and to ensure that their legislation is in line with internationally protected women’s human rights.”

Many see the Vatican’s accession to the Paris Climate Agreement today as yet one more step along what Voice of the Family called “the steady reversal of the Holy See’s former vigilance on this issue [of abortion] and the increasing incidence of the Vatican and international anti-life and anti-family forces working together, despite the Holy Father’s public condemnations of abortion.”