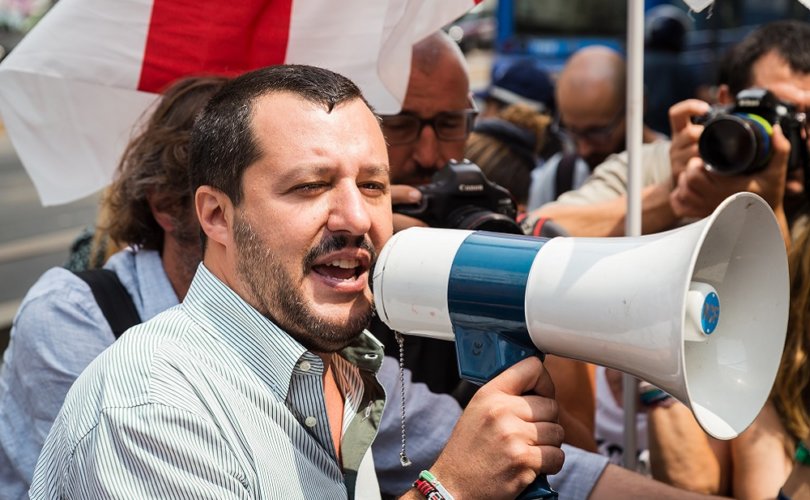 May 20, 2019 (LifeSiteNews) — The Catholic Italian politician with whom Pope Francis reportedly refuses to meet because of his immigration stance held and kissed a rosary during a political rally over the weekend and invoked the Blessed Mother, drawing criticism from some quarters and support from others.

Deputy premier and interior minister Matteo Salvini also commended his country, its citizens, and himself to the Immaculate Heart of Mary, something unheard of from a Catholic political leader.

During a Saturday political rally attended by tens of thousands in the Piazza del Duomo in Milan, Salvini appealed to the six patron saints of Europe, The Tablet reports, Ss. Benedict of Norcia, Brigid of Sweden, Catherine of Siena, Cyril and Methodius, and Teresa Benedicta of the Cross (Edith Stein).

Salvini then kissed his rosary, looked up to statue of the Blessed Mother atop the 14th-century Milan Cathedral and said, “I entrust Italy, my life, and your lives to the Immaculate Heart of Mary, who I’m sure will bring us to victory.”

Salvini, head of Italy’s Lega (League) Party, led the rally with 10 other populist European leaders ahead of this week’s European Parliament elections, in a growing resistance to centralized European Union (EU) control, and in particular, support for tightening immigration laws.

Salvini is a conservative Catholic politician known for prioritizing his country over the European Union, garnering himself the “nationalist” label by the media and the left.

Jesuit Father Antonio Spadaro, editor of La Civiltà Cattolica and close confidant of Pope Francis, was among the Catholic figures disapproving of Salvini’s use of the rosary at the rally.

Last year, Spadaro opposed a proposed Italian law mandating that crucifixes be placed in all public buildings, accusing Salvini’s League party on Twitter of seeking to use the crucifix as an action figure, which is “blasphemous.”

“I believe partisan politics divides, but God belongs to everyone,” Parolin told reporters at the Cathedral of St. John Lateran. “Invoking God for oneself is always very dangerous.”

Cardinal Angelo Bagnasco, president of the European Bishops’ Conference, also denounced Salvini to Italian newspaper La Stampa, according to The Tablet, saying particular groups cannot appropriate Christian values and that “acceptance and integration are essential values of the Gospel” and have “no color.”

Bishop Domenico Mogavero, of Mazara del Vallo, a port in western Sicily, head of the judicial affairs panel of the Italian Bishops’ Conference (CEI), said Salvini can no longer call himself a Christian, according to ANSA new service.

“We can no longer stay silent over the bragging of an ever more arrogant minister,” Mogavero said.

“We can no longer allow (people) to appropriate the sacred signs of our faith to peddle their inhuman, anti-historic views, diametrically opposed to the Gospel message,” he said. “Those who are with him cannot call themselves Christian because they have reneged on the commandment of love.”

Italian Catholic weekly Famiglia Cristiana termed Salvini’s kissing of the rosary and response to the pope an instance of “fetishist sovereignty.”

Enzo Bianchi, lay founder of the ecumenical Monastic Bose Community and an influential figure in the Italian Church, said he was “profoundly disturbed” by Salvini’s actions.

“How is it possible that a politician today, at an electoral rally, can kiss the rosary, invoke the patron saints of Europe and entrust Italy to the immaculate heart of Mary for the victory of his party?” Bianchi tweeted. “Catholics, if you love Christianity, do not be silent. Protest!”

At the same time, Catholic Herald columnist and associate professor of theology for the Catholic University of America C.C. Pecknold offered reasoned analysis, pointing out among other things that Salvini echoes what Guinean Cardinal Robert Sarah has said on immigration.

Sarah, prefect of the Congregation for Divine Worship and the Discipline of the Sacraments, has affirmed a nation’s right to differentiate between refugees and economic migrants and acknowledged a globalist effort to de-Christianize the West via mass migration. He has also criticized the idea that social justice issues such as immigration displace or are on the par with the Church’s primary purpose to save souls.

“We need whole nations consecrated to Our Lady”

Conceding that Spadaro’s politics are different from Salvini’s, Pecknold said he was nonetheless baffled by Spadaro’s comment that rosaries in politics should anger Christians.

“The Church does not have political models to commend, or defend,” Pecknold wrote. “The Church teaches precepts which are elevating standards for any order. Salvini appears to be cognizant of these principles, and that should be praised by the Church, regardless of policy disagreements.”

“There is nothing wrong with rosaries in politics,” he said. “We need whole nations consecrated to Our Lady.”

While Salvini was one among 11 European leaders to appear at the rally Saturday, the Associated Press reports that most of the tens of thousands of supporters who filled the square outside Milan’s Duomo cathedral were there for the Italian interior minister, with League flags filling the square among a “smattering” of national flags from other countries.

Pecknold had also written that at the end of the campaign rally, when Salvini commended himself and his country to the Immaculate Heart of Mary, “[t]he Milan crowd cheered with Beatle-mania-like vigor.”

Salvini mentioned Pope Francis during the Milan rally Saturday, answering Francis’s comments to a group of journalists that same day at the Vatican not to forget that the Mediterranean had been turned into a cemetery due to migrant drownings.

“To His Holiness, Pope Francis,” Salvini said, “I say that the policy of this government is eliminating the dead in the Mediterranean with pride and Christian charity.”

The crowd promptly booed at the rally when they heard the pope’s name, The Tablet report said.

Several Italian publications reported in recent months based on information from anonymous sources that Pope Francis refuses to meet with Salvini because of Salvini’s strong stance against illegal immigration — this while Francis has met on repeated occasions with supporters of abortion and other issues in conflict with Church teaching.

More recently, papal almoner Cardinal Konrad Krajewski, a close aide to Francis, said as well that the Vatican would deny Salvini a papal blessing for the same reason, comparing Salvini to an abortion-provider and Venezuelan dictators in making the point.

Immigration policy is a prudential issue over which Catholics can disagree regarding specifics of its handling. Abortion, however, is a mortal sin and non-negotiable according to Church teaching.

Francis continually signals support for open immigration, condemning attempts to stem the tide of Muslim immigration into Europe, even at the cost of national security.

Since 2015, Europe has faced large-scale to crisis-level immigration, mostly from Muslim-majority countries in the Middle East and Africa.

Many migrants risk and lose their lives while trying to move, and there is rampant disagreement over refugee status, national sovereignty and security concerns, and terrorism and crime, as well as the burden of funding social support for migrants and refugees.

A complicit media establishment has continually downplayed any downside to open borders in most arenas throughout the crisis.

The pope has condemned walls related to national borders on more than one occasion — a veiled reference to U.S. president Donald Trump for Trump’s national security policies deferential to the U.S. Along this same ostensible vein, Francis even said in 2016 that “building walls” instead of “building bridges” “is not Christian.” Then he said again last month, “He who builds a wall ends up a prisoner of the wall he built.”

A ‘duty within the limits of the possible’

Salvini said on Monday that he would like to meet the pope, and he cited the Catechism to say the possible limits of welcoming immigrants had been exceeded.

“I would like to be received by the pope, but I have never asked for it,” Salvini said. “He is one of the most stimulating and fascinating people — I could only learn from him.”

“If the occasion will arise, I will be more than willing to meet him,” Salvini added, according to ANSA. Salvini said welcoming migrants “is a ‘duty within the limits of the possible,’ according to the Catechism of the Catholic Church(, and) the possible has been surpassed.”

On Monday before an ANSA forum, Salvini questioned the idea that invoking the Blessed Mother is offensive.

“I hear I’m being called inhuman because I go around with a crucifix in my pocket,” he said. “May I ask for Mary’s help, or will someone be offended?”

Salvini admitted to being a sinner and said it does not stop him from keeping a rosary with him, Germany’s international broadcaster Deutsche Welle’s Qantara.de reports.

“I am the last among good Christians,” said Salvini, “but I am proud to always have a rosary in my pocket.”