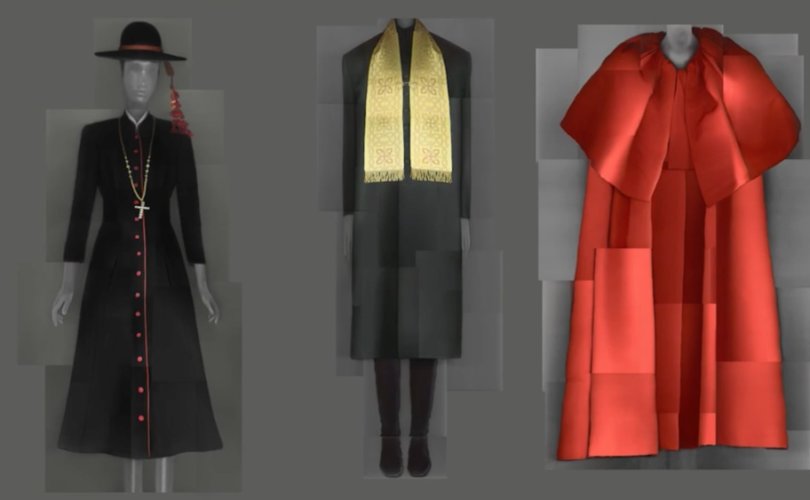 NEW YORK, April 18, 2018 (LifeSiteNews) – The Vatican has lent a collection of historical liturgical vestments and other sacred objects from the Sistine Chapel's sacristy to a New York gallery for a secular exhibition. While many Catholics may consider the Vatican's inclusion of the items approaching sacrilege, a Vatican cardinal is defending the decision.

The event running May 10-October 8 at the Metropolitan Museum of Art is titled Heavenly Bodies: Fashion and the Catholic Imagination.

Many of the items were created by fashion designers who say they are Catholic. Our Lady of Fatima stressed modesty in dress in her 1917 appearances to the three children, warning that “certain fashions will be introduced that will offend Our Lord very much.”​

Another clothing item meant to be worn by a man imitates the papal regalia, including the mitre (ceremonial headdress).

“Serving as the cornerstone of the exhibition, papal robes and accessories from the Sistine Chapel sacristy, many of which have never been seen outside The Vatican, will be on view,” the overview adds.

Cardinal Gianfranco Ravasi, the Vatican's “cultural minister,” defended his decision to lend the sacred articles to the secular event. He denied that the Vatican's participation in the event was “unfitting,” reported German bishops' news website Katholisch.de on April 10.

The Cardinal said that there can be a dialogue between the Church and the fashionable world of beauty. He contributed an essay to the exhibition's catalog.

According to Ravasi, fashion is an important form of today's communication. While the exhibition shows luxury objects – which is not part of the Church's life – Ravasi explained that the Church still has to try to enter “that part of the other world where there exists evil.”

Ravasi, who is the President of the Pontifical Council for Culture, has sent to New York more than fifty masterworks from the Vatican collection.

The Vatican has sent to this art exhibition the following religious items, according to a Vogue article:

The pieces range in date from the mid-18th to the early 21st centuries and encompass more than 15 papacies. The earliest is a mantle worn by Benedict XIV, and the latest is a pair of red shoes worn by Saint John Paul II. Several of the pieces have never been seen outside the Vatican, including a suite of 12 vestments commissioned by Empress Maria Anna Carolina of Austria for Pius IX. Dating to the mid-19th century, they required 15 women more than 16 years to complete.” Another highlight, he added, will include a papal tiara given to the same pope, Pius IX, by Queen Isabella II of Spain that contains 19,000 precious stones, 18,000 of them diamonds.

The fashion exhibition was made possible with the help of the fashion company Versace, whose founder, Gianni Versace, was an LGBT icon.