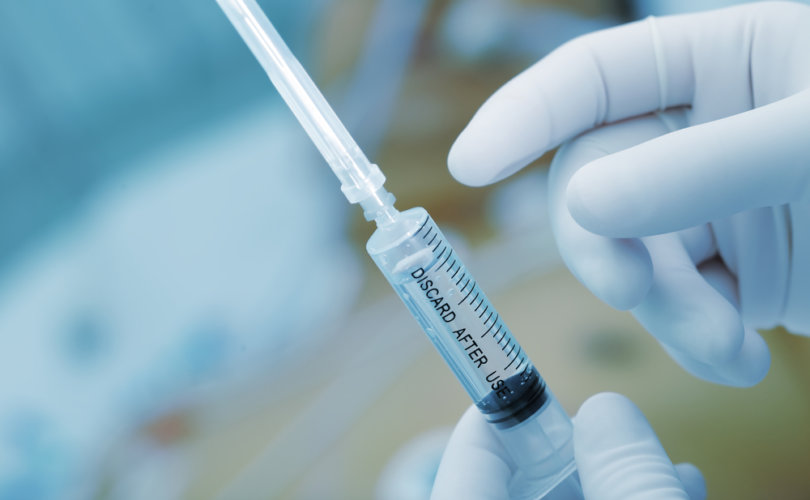 VATICAN CITY, March 26, 2019 (LifeSiteNews) — In a stunning declaration, the Pontifical Academy for Life — now populated entirely with Pope Francis appointments — has urged parents to vaccinate their children, even if the vaccines are derived from aborted babies.

The issue made national headlines this month when a Catholic family sued a local health department after it placed severe restrictions on school attendance and extracurricular activities of students at Assumption Academy in Walton, Kentucky, following an outbreak of chickenpox at the school.

Many Catholic families choose not to vaccinate their children against certain childhood diseases such as measles and chickenpox because the only vaccines available are derived from the cells of babies aborted in the 1960s.

In the middle of the controversy, the Pontifical Academy of Life chimed in, siding not with the conscientious Catholic parents and students, but with the health department officials for whom the abortion-derived vaccines present no moral dilemma.

The newly constituted Pontifical Academy of Life (PAV) — from which Pope Francis ejected all members appointed by Pope St. John Paul II and inserted his own appointees, with controversial Archbishop Vincenzo Paglia serving as the body’s head — said that “the cell lines currently in use are very distant from the original abortions and no longer imply that bond of moral cooperation indispensable for an ethically negative evaluation of their use.”

There is a “moral obligation to guarantee the vaccination coverage necessary for the safety of others,” added the PAV in its 2017 statement.

“An appropriate and necessary response”

The Kunkel parents, upon discovering the truth about the origins of the vaccines, chose not to have the chickenpox vaccine administered to their son, Jerome.

Now an 18-year-old senior, Jerome plays center for the school’s basketball team but has been prevented from finishing out the season as result of the Northern Kentucky (NKY) Health Department’s directive.

The ban pits the religious liberty of the Kunkels and other Catholic families who conscientiously object against what the NKY Health Department says is the common good.

“Chickenpox, also known as varicella, can be a very serious illness that is especially dangerous for infants and pregnant women or anyone who has a weakened immune system,” declared the the NKY Health Department in an online statement. “The recent actions taken by the Northern Kentucky Health Department regarding the chickenpox outbreak at Our Lady of the Sacred Heart/Assumption Academy was in direct response to a public health threat and was an appropriate and necessary response to prevent further spread of this contagious illness.”

“The chickenpox vaccine is the best way to prevent becoming ill and spreading the varicella virus,” concludes the NKY Health Department, which advised Assumption Academy parents in a series of letters about the outbreak.

Parents were told, “All students without proof of vaccination or proof of immunity against chickenpox will not be allowed to attend school until 21 days after the onset of rash for the last ill student or staff member.”

Discrimination against Catholics living their faith

Despite the dangers inherent in rejecting the vaccine, its origin remains highly problematic — if not anathema — for Catholics who view abortion of unborn infants as murder. The fact that those murders occurred over fifty years ago does not ameliorate their violence and horror.

Jerome says the ban discriminates against him because of his religious beliefs.

“The fact that I can’t finish my senior year of basketball … is pretty devastating,” said Jerome. “I mean, you go through four years of high school playing basketball, you look forward to your senior year.”

His father, Bill, went further and told The Washington Post, “This is tyranny against our religion, our faith, our country.”

“I don’t believe in that vaccine at all,” said the elder Kunkel in a WLWT5 TV interview, “and they’re trying to push it on us.”

“The chickenpox vaccine is derived from aborted fetuses,” continued Kunkel, adding, “as Christians, we’re against abortions.”

In 2005, the PAV issued a statement that went to great lengths to describe the various levels of evil associated with the development, production, and marketing of such vaccines, while also addressing the culpability of doctors and parents.

The PAV said at that time that cooperation with the moral evil involved is “more intense on the part of the authorities and national health systems that accept the use of the vaccines” than it is on the part of doctors who administer the vaccines and the parents who choose to inoculate their children using the tainted vaccines because no other option exists.

While the PAV’s 2005 statement acknowledged the “moral coercion of the conscience of parents, who are forced to choose to act against their conscience or otherwise, to put the health of their children and of the population as a whole at risk,” the 2017 statement by the Academy essentially erases the role of conscience for parents, instead declaring a moral obligation to use the vaccines derived from aborted children.

“As we have seen on many other questions, the reconstituted PAV backslides into positions that no longer reinforce the conscience protections Catholic parents, and Catholics in general seek in order to live their lives in faith and trust in Christ,” said Judie Brown, American Life League president, in a statement to LifeSiteNews. “The new PAV position on vaccinations for children is more of the same.”

So not only are the consciences of the Catholic families of Walton Kentucky’s Assumption Academy pitted against their local health department, but they find themselves in opposition to the relaxed attitudes and standards of Francis’s Pontifical Academy of Life.

Debi Vinnedge, the founder of Children of God for Life, recently told LifeSiteNews’s Rome Correspondent, Diane Montagna, “There is a huge market worth billions of dollars due to the creation of patents, sale of the cell lines by companies that actually store and resell aborted fetal material.”

Research and vaccine production is filling the pockets of “universities, biotech companies, the pharmaceutical industry and of course, Planned Parenthood who was caught in an undercover sting discussing how they ensure obtaining intact organs for sale.”

“The tacit approval of using the aborted fetal vaccines when there is no alternative is a major roadblock to making any progress to stop this injustice,” said Vinnedge. “Until our physicians and clergy leaders unite worldwide demanding the moral alternatives, the pharmaceutical industry is not going to change. In fact, as history and the current trends are proving, it’s only going to get worse.”

Christopher Ferrara, author and head of the American Catholic Lawyers’ Association, said in 2017 that Pope Francis “demolished John Paul II’s Pontifical Academy for Life by sacking every one of its members and having its new president, the ‘pro-gay’ Archbishop Vincenzo Paglia, draw up new statutes for the Academy.”

“Bear in mind that Pope [Francis] has abolished the pro-life oath formerly taken by members of the Academy,” he added.