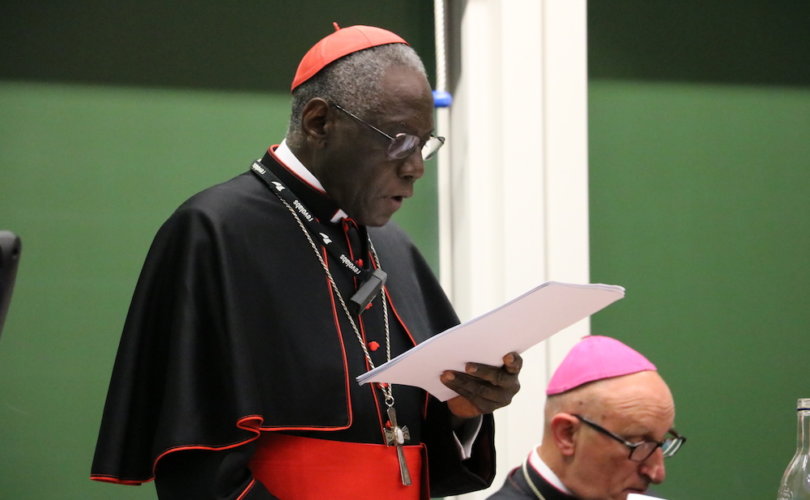 LONDON, July 5, 2016 (LifeSiteNews) – Speaking at a conference on the liturgy in London yesterday, Cardinal Robert Sarah, the highest authority on the topic in the Catholic Church under Pope Francis, asked all bishops and priests to adopt the ancient posture in the Mass where the priest faces the tabernacle along with the congregation, rather than facing the people. He asked that the posture be adopted by Advent of this year, which begins November 27. During the same talk, Cardinal Sarah encouraged all Catholics to receive Communion kneeling. During the talk, the Vatican’s liturgy chief revealed that Pope Francis had asked him to “continue the liturgical work Pope Benedict began.”

Vatican watchers are particularly stunned that Pope Francis, who is regarded by many as a liberal, has encouraged a more traditional approach to liturgy. Yet Cardinal Sarah said, “Our Holy Father Pope Francis has the greatest respect for the liturgical vision and measures of Pope Benedict.”

French Bishop Dominique Rey, who was present at the conference, took up Cardinal Sarah’s request without hesitation, vowing to at least begin to implement the change in his diocese by Advent. Rey, the Bishop of Fréjus-Toulon, addressed Cardinal Sarah at the conference, saying: “In response to your appeal I wish to announce now, that certainly on the last Sunday of Advent of this year in my celebration of the Holy Eucharist at my cathedral, and on other occasions as appropriate, I shall celebrate ad orientem—towards the Lord who comes.” Bishop Rey added, “Before Advent I shall address a letter to my priests and people on this question to explain my action. I shall encourage them to follow my example.”

Cardinal Sarah gave thanks for the many celebrations of the liturgy that are devout and give glory to God, but he also lamented the many abuses of the liturgy in the Church. “In recent decades,” he observed, “we have seen many liturgical celebrations where people, personalities and human achievements have been too prominent, almost to the exclusion of God.”

Sarah suggested that the Fathers of the Second Vatican Council intended liturgical reform to bring more of the faithful to the Mass, yet for the most part the effort has failed. “My brothers and sisters, where are the faithful of whom the Council Fathers spoke?” he asked.

Many of the faithful are now unfaithful: they do not come to the liturgy at all. To use the words of St John Paul II: many Christians are living in a state of “silent apostasy;” they “live as if God does not exist” (Apostolic Exhortation, Ecclesia in Europa, 28 June 2003, 9). Where is the unity the Council hoped to achieve? We have not yet reached it. Have we made real progress in calling the whole of mankind into the household of the Church? I do not think so. And yet we have done very much to the liturgy!

He expressed “profound grief” at the “many distortions of the liturgy throughout the Church today,” and proposed that the “Eucharist is too great a gift to tolerate ambiguity and depreciation.”

One such abuse he mentioned was when priests “step aside to allow extraordinary ministers distribute Holy Communion” which for many priests was thought to be a way of allowing lay people to participate in the Mass in a substantial way.  Rather, said Cardinal Sarah, “This is wrong, it is a denial of the priestly ministry as well as a clericalisation of the laity.”

“When this happens it is a sign that formation has gone very wrong, and that it needs to be corrected,” he added.

He encouraged a generous reception of the traditional Latin Mass and also encouraged traditional practices Pope Benedict proposed previously, including the use of Latin in the new Mass, kneeling for Holy Communion, as well as Gregorian chant. “We must sing sacred liturgical music not merely religious music, or worse, profane songs,” he said. “The Council never intended that the Roman rite be exclusively celebrated in the vernacular. But it did intend to allow its increased use, particularly for the readings.”

Speaking of kneeling for Holy Communion, the Vatican liturgy chief reminded priests that they are forbidden from denying Communion to the faithful for kneeling for reception of the Sacrament. Moreover, he encouraged all to receive while kneeling where possible. “Kneeling at the consecration (unless I am sick) is essential. In the West this is an act of bodily adoration that humbles us before our Lord and God. It is itself an act of prayer. Where kneeling and genuflection have disappeared from the liturgy, they need to be restored, in particular for our reception of our Blessed Lord in Holy Communion.”

A lengthy section of his talk was devoted to calling priests and bishops to celebrate Mass facing “ad orientem” or with the people facing Our Lord.  Here are the key excerpts:

Even though I serve as the Prefect of the Congregation for Divine Worship, I do so in all humility as a priest and a bishop in the hope that they will promote mature reflection and scholarship and good liturgical practice throughout the Church.

I want to make an appeal to all priests… I believe that it is very important that we return as soon as possible to a common orientation, of priests and the faithful turned together in the same direction—Eastwards or at least towards the apse—to the Lord who comes, in those parts of the liturgical rites when we are addressing God… I think it is a very important step in ensuring that in our celebrations the Lord is truly at the centre.

And so, dear Fathers, I ask you to implement this practice wherever possible, with prudence and with the necessary catechesis, certainly, but also with a pastor’s confidence that this is something good for the Church, something good for our people.

Your own pastoral judgement will determine how and when this is possible, but perhaps beginning this on the first Sunday of Advent this year… may be a very good time to do this. Dear Fathers, we should listen again to the lament of God proclaimed by the prophet Jeremiah: “they have turned their back to me” (2:27). Let us turn again towards the Lord!

I would like to appeal also to my brother bishops: please lead your priests and people towards the Lord in this way, particularly at large celebrations in your dioceses and in your cathedral. Please form your seminarians in the reality that we are not called to the priesthood to be at the centre of liturgical worship ourselves, but to lead Christ’s faithful to him as fellow worshippers. Please facilitate this simple but profound reform in your dioceses, your cathedrals, your parishes and your seminaries.

Throughout the talk, Cardinal Sarah stressed the grave responsibility of priests regarding the Eucharist. “We priests, we bishops bear a great responsibility,” he said. “How our good example builds up good liturgical practice; how our carelessness or wrongdoing harms the Church and her Sacred Liturgy!”