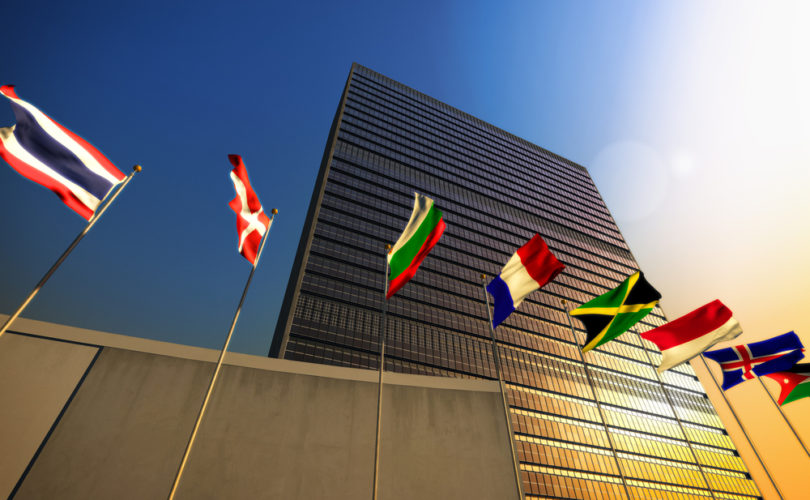 NEW YORK, September 8, 2015 (LifeSiteNews) — The Vatican has issued formal reservations about the much-hyped Sustainable Development Goals (SDGs) to be officially adopted later this month at United Nations (UN) headquarters in New York during a special visit from Pope Francis.

The 17 goals offer what the UN calls a “plan of action for people, planet and prosperity” and promise to deliver a world where poverty is eradicated, the planet is “heal[ed] and secure[d],” and where “no one [is] left behind.” But critics, including the Vatican, have raised concern about language inserted in the goals that they say will be used to promote abortion and even population control in developing countries.

Last week the Vatican’s Permanent Observer of the Holy See to the UN, Archbishop Bernardito Auza, made formal “reservations” on the SDGs that mention “reproductive health,” “family planning,” and “gender.”

The Vatican stated that regarding the terms “sexual and reproductive health” and “reproductive rights,” it considers these as “applying to a holistic concept of health, which embrace, each in their own way, the person in the entirety of his or her personality, mind and body, and which foster the achievement of personal maturity in sexuality and in the mutual love and decision-making that characterize the conjugal-relationship between a man and a woman in accordance with moral norms.”

“The Holy See does not consider abortion or access to abortion or abortifacients as a dimension of these terms,” the Vatican stated.

Regarding terms that indicate “family-planning” services, the Vatican reaffirmed what it called its “well-known position concerning those family-planning methods which the Catholic Church considers morally acceptable and, on the other hand, family-planning services which do not respect the liberty of the spouses, human dignity and the human rights of those concerned.”

When the term “gender” is used in the SDGs, the Vatican stated that it understands this to be “grounded in the biological sexual identity that is male or female.”

Archbishop Auza asked the UN to interpret the SDGs in light of its promise to “leave no one behind,” including the pre-born.

“The Holy See remains confident that the related pledge ‘no one will be left behind’ will serve as the perspective through which the entire Agenda will be read to protect the right to life of the person, from conception until natural death,” he said.

Last month Archbishop Silvano Tomasi, the Holy See’s permanent observer to the United Nations in Geneva, explicitly criticized the SDGs for containing an implicit push for abortion using the language of “reproductive rights,” a move that he says is contrary to authentic human development.

Tomasi said that by the UN including goals affirming abortion as an “achievement, a right to be guaranteed to all,” it’s as if the UN thinks that by “eliminating people there would be fewer problems.”

While pro-life leaders were glad to see that a ‘universal right’ to abortion did not make it into the final version of the goals adopted August 2, they were quick to point out that the document makes clear that language of “sexual and reproductive health and reproductive rights” must be interpreted according to a 1994 conference in Cairo, where those phrases explicitly mean providing women with “modern contraception” and with “safe abortion” where it is legal.

“That is UN-specific language calling for universal access to abortion and others services geared for population control efforts,” wrote Dr. Joseph Meaney of Human Life International in a report on the SDGs.

In its most resent statement, the Vatican raised a formal reservation against the outcome documents of the 1994 Cairo conference.

Patrick Buckley of the Society for the Protection of Unborn Children said that “sexual and reproductive health” language is “routinely used by the international pro-abortion and population control lobby to refer to the legalization of abortion on demand and access for children, without parental knowledge or consent, to abortion and birth control drugs and devices in countries throughout the world.”

In July the Holy See’s mission to the UN stressed its commitment to protecting preborn children after receiving criticism for supporting “verbatim” the goals and targets of the SDGs during UN negotiations. Some pro-life leaders raised concern that the Vatican endorsement of the goals amounted to a betrayal of preborn children. This concern was compounded in light of what some leaders in the life-and-family movement see as an unprecedented openness to the UN’s agenda by the Vatican under Pope Francis in which criticism of the UN’s anti-life and anti-family agenda is often muted or nonexistent.

Pope Francis will be visiting UN headquarters in New York on September 25 where he will give an address to the UN General Assembly prior to the official opening of the UN Summit for the adoption of the post-2015 SDGs. The summit runs September 25-27.