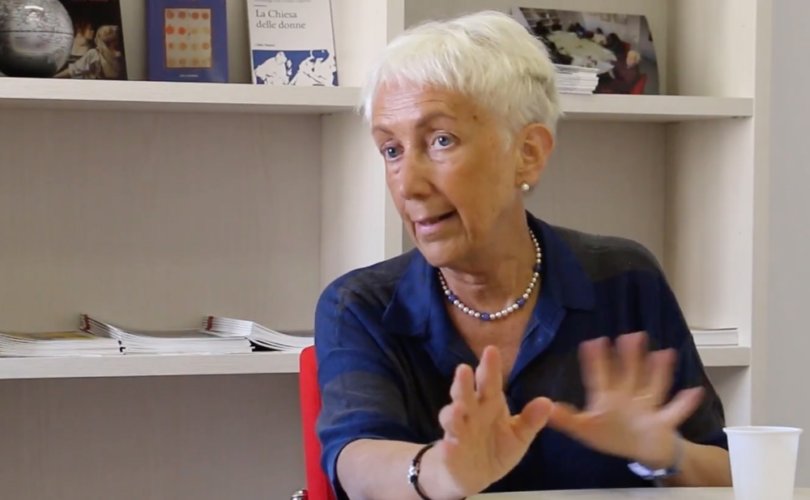 ROME, Italy, May 14, 2019 (LifeSiteNews) ― The former editor of the Vatican’s women’s magazine says she does not like abortion, but she wants to keep it legal.

Lucetta Scaraffia, 70, was permitted by Benedict XVI to found a women’s magazine for the Vatican’s principal newspaper, L’Osservatore Romano in 2012. But although she recently told a reporter for the UK Guardian that she believes abortion is bad, Scaraffia doesn’t believe it should be a crime.

“I’m against abortion because I think it’s bad, but I don’t think women should be criminalised for it,” she told interviewer Angela Giuffrida this month.

Scaraffia explained her position further in an interview with the UK’s Catholic Herald earlier this year.

“Doubtless abortion is a sin and, as such, it has to be condemned by the Catholic Church,” she said.

“But this does not mean it should be punished as a crime by the state. For women, before anything else, abortion is a wound, both physical and psychic, inflicted on themselves which they will pay for, consciously or unconsciously, during their whole life. This is already sufficient punishment, above all if one realises that the man who has made her pregnant has nothing to pay, though he has the same responsibility,” she continued.

“To punish the woman, and only her and not the man who shares the responsibility, is therefore a grave injustice. As a result, I am in favour of the decriminalisation of abortion.”

Speaking as a historian, Scaraffia said that abortion entered civil criminal law for the first time with the Napoleonic Code and the motivations were motivated not by morals but by the need for soldiers. She believes abortion was legalized in the West when it became understood that numbers of soldiers were not as necessary to winning wars as technology.

The child of a Catholic mother and a Masonic father, Scaraffia fell away from her childhood faith in the 1970s and, according to the Guardian, campaigned for the legalization of abortion in Italy. She returned to the Catholic faith in her thirties when she was a history professor at  Sapienza University in Rome. She began contributing to L’Osservatore Romano in 2007 after Benedict XVI asked editor Giovanni Maria Vian to find women to write in the paper.

Despite being a committed feminist, Scaraffia is considered a theological conservative. She does not believe in women’s ordination, abortifacients, surrogacy, equality of outcome in women’s and women’s jobs and wages ― but she still believes abortion should be legal.

This belief runs contrary to the Catechism of the Catholic Church which states that the right to live of every human being, including unborn children, is a necessary part of a society and its laws. In Section 2273, the Catechism states as follows:

The inalienable right to life of every innocent human individual is a constitutive element of a civil society and its legislation:

“The inalienable rights of the person must be recognized and respected by civil society and the political authority. These human rights depend neither on single individuals nor on parents; nor do they represent a concession made by society and the state; they belong to human nature and are inherent in the person by virtue of the creative act from which the person took his origin. Among such fundamental rights one should mention in this regard every human being's right to life and physical integrity from the moment of conception until death.”

“The moment a positive law deprives a category of human beings of the protection which civil legislation ought to accord them, the state is denying the equality of all before the law. When the state does not place its power at the service of the rights of each citizen, and in particular of the more vulnerable, the very foundations of a state based on law are undermined. . . . As a consequence of the respect and protection which must be ensured for the unborn child from the moment of conception, the law must provide appropriate penal sanctions for every deliberate violation of the child's rights.”

The Guardian’s interest in Scaraffia stems from her magazine’s March 2018 exposé on the exploitation of women religious by priests as domestic servants and its February 2019 article detailing clerical sexual violence against nuns. Scaraffia also piqued the interest of the secular press by sending a strongly-worded letter of resignation to Pope Francis.

Scaraffia and eight of her editorial staff quit Donne Chiesa Mondo on March 26 of this year. Following the unflattering stories about exploitative clergy, Scaraffia believed that her magazine’s parent publication, L’Osservatore Romano, had begun to interfere with her magazine’s autonomy.

Scaraffia did not take a salary for her work as the editor of Donne Chiesa Mondo.