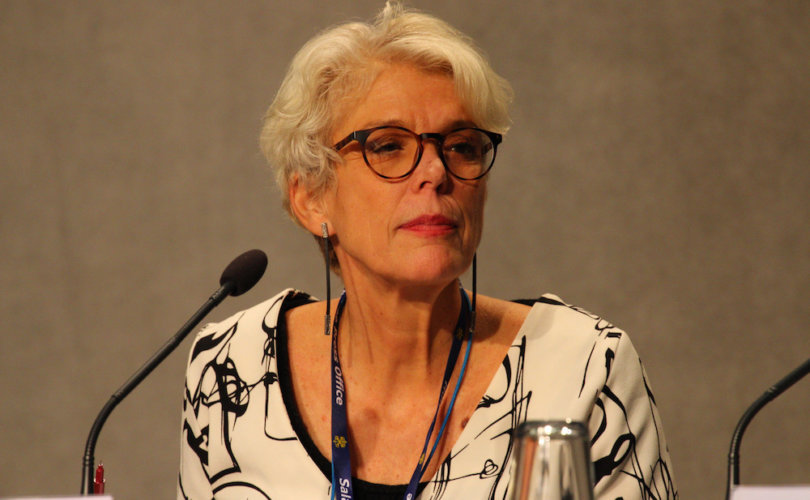 At today’s presser, journalist Edward Pentin asked Cardinal Beniamino Stella, Prefect of the Congregation for Clergy, to respond to news that six politicians from leftist and Communist parties had been invited to the synod by REPAM (the Pan-Amazonian ecclesial network tasked with organizing the synod), and had “presented a document to some synod fathers, despite the Holy Father saying that serving politicians should not be involved in the synod.”

Leftists politicians invited to the synod by REPAM included Nilto Tatto, Airton Faleiro, Hélder Salomão of the Labor Party; Camilo Capiberibe and Bira do Pindaré of the Socialist Party of Brazil; and Jandira Feghali of the Communist Party of Brazil.

In 2015, Jandira Feghali opposed legislation to make infanticide among indigenous peoples a crime, arguing that it constituted interference in their autonomy.

The six politicians met with several synod fathers from Brazil, including Bishops Antonio Maria da Silva, vice-president of the Brazilian bishops’ conference, Evaristo Spengler of Marajó, and Roque Paloschi of Roraima, president of the Missionary Council of Indigenous Peoples (CIMI), one of the key recipients of Ford Foundation funding.

At today’s briefing, Pentin recalled last week’s revelations that the American far-left Ford Foundation, whose board members include former Planned Parenthood president Cecile Richards, had financed CIMI and other REPAM-affiliates to the tune of over 2 million dollars.

In a second question to Christiane Murray, deputy director of the Holy See press office and moderator of the daily Amazon press briefings, Pentin asked directly: “You’re a co-founder of REPAM. Can you tell us exactly what your relationship is with REPAM now and any political affiliations you might have?”

Offering what she called a “little clarification about the event with the politicians,” Christiane Murray said it was a “parallel event” and “was never part of the synod program and it’s not a synod event.”

“It was a parallel event. It has nothing to do with the synod,” she insisted.

Murray denied playing any key role in REPAM. “I am not a co-founder of REPAM. I covered it as a journalist, as a colleague. It’s an ecclesial network; I don’t see what’s wrong with that.”

Her denial stands in sharp contrast with the praise she received, at an Oct. 8 press briefing, from Peruvian Cardinal Pedro Barreto, SJ, archbishop of Huancayo and vice-president of REPAM, who called her the “co-founder” of REPAM together with Cardinal Claudio Hummes.

Pentin then politely asked if Cardinal Stella could answer the original question about possible left-leaning politicization of the synod and pro-abortion Ford Foundation funding.

Taking her cue from Fr. Giacomo Costa, a member of the synod information commission, Murray dismissed the question, saying simply “the Synod isn’t politicized” and that the question “was already answered.”

She then turned to take another question from the floor, until calls came from journalists to allow Cardinal Stella to speak and asking her why she wouldn’t allow him to answer, pressed her to give him the floor.

Cardinal Stella said he really wouldn’t know how to respond and suggested these “details certainly ought to be examined in another forum.” The cardinal spoke well of REPAM, calling it a “beautiful Latin-American reality” that knows the Amazon region, adding that he thinks the pastoral work could do a “world of good.”

Paolo Ruffini, prefect of the Vatican dicastery for communications and president of the Amazon synod information commission, interjected that “the synod is not financed by the Ford Foundation. The synod is founded by the Holy See.”

“Returning to the theme of politicization, nothing in the synod can be interpreted as political,” Ruffini added.

“We’re talking about a synod, about the Church. That there may be parallel events, as Christiane mentioned, organized with others, with other participants, that’s up to each person’s freedom,” he said.

He repeated: “The synod financing is financing entirely handled internally by the Holy See.”

Offering a final word, Christiane Murray said the synod couldn’t possibly be politicized, on the grounds that “it’s an ecclesial event; it’s a synod of bishops.”

But several observers of today’s bizarre and unprecedented episode say it is further evidence of what seems to be growing lack of strategy and erosion of trust in the Vatican media apparatus.

In an article published this evening, Edward Pentin notes that Christiane Murray never answered the question about her political affiliations, but says “they appear to be clearly of the left.”

“A French Communist Party poster is hanging above her desk at Vatican Radio,” he added. See the image here.