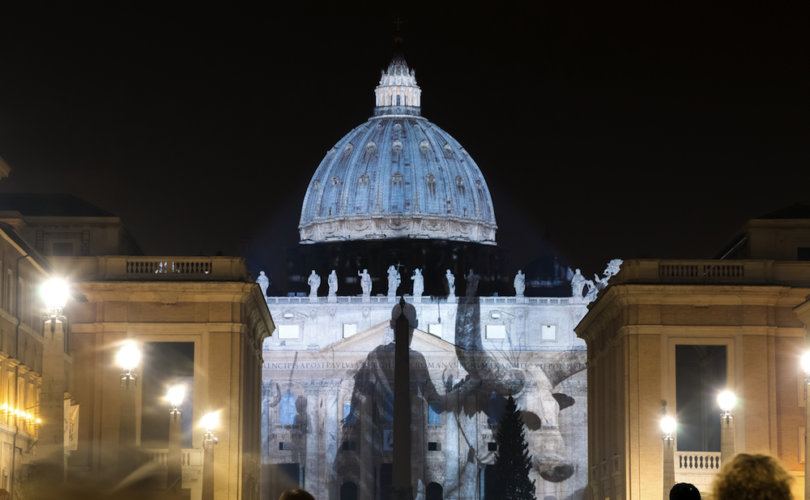 A light show illuminates St. Peter's Basilica on December 8, 2015, the final event of the opening of the Holy Year Jubilee.Thoom / Shutterstock.com

ROME, December 12, 2016 (LifeSiteNews) – New Vatican guidelines for the training of future priests are prioritizing instruction in the “planetary crisis” and an “ecological conversion” while making no reference to the importance of rampant moral evils such as abortion and contraception.

The new guidelines from the Vatican's Congregation for the Clergy, published December 7, emphasize that it will be “necessary” for seminarians to be trained in ecological concerns, a major focus of Pope Francis.

“It will be necessary for future priests to be highly sensitive to this theme and, through the requisite Magisterial and theological guidance, helped to ‘acknowledge the appeal, immensity and urgency of the challenge we face,’” the guidelines read, quoting the pope’s ecological encyclical Laudato Si’. “This must then be applied to their future priestly ministry, making them promoters of an appropriate care for everything connected to the protection of creation.”

The document, titled “The Gift of the Priestly Vocation,” is an update of previous guidelines published in 1985. It lays out all elements of priestly formation and spiritual discernment, and will have a major impact on priestly formation worldwide.

Cardinal Beniamino Stella, Prefect of the Congregation for Clergy, explained in an interview with the Vatican’s newspaper, L’Osservatore Romano, that the new guidelines were shaped by Pope Francis’ teachings.

“The last Ratio Fundamentalis dates back to 1970, even though it was updated in 1985. In the meantime, as we know, the historical, socio-cultural and ecclesiastical contexts have changed, above all due to the effects of the rapid evolution to which the world is subjected nowadays,” he said.

“We have been encouraged and illuminated by the Teaching of Pope Francis: by the spirituality and prophecy with which his words are inscribed, the Holy Father has turned often to Priests, reminding them that the priest is not a functionary, but a Pastor anointed for the people of God, who has the compassionate and merciful heart of Christ for the weary and exhausted throng,” he continued. “The words and admonitions of the Holy Father, some of which have regarded temptations tied to money, to the authoritarian exercise of power, to rigid legalism, and to vainglory, show us how the nurturing of Priests and of their formation has been a fundamental aspect of the ecclesial action of this Pontificate, and should also become the focus, more each day, of every Bishop and of every Local Church.”

Pope Francis has faced significant criticism during his papacy for his strong focus on environmentalism and his promotion of the climate change agenda. He was criticized for urging passage of the United Nations’ sustainable development goals despite the fact that they also promoted abortion. In 2015, on the feast of the Immaculate Conception, he allowed St. Peter’s Basilica to be used as the backdrop for a light show promoting environmentalism.

Besides the call to “ecological conversion,” the 90-page document lays out the various areas of formation for men preparing for the priesthood. The document will serve as a basis for the Conference of Bishops of each country to prepare their own Ratio Nationalis, which will be the guidelines for the given country.

A closer look discloses some interesting statements. The document addresses the question of gay priests and states that men who practice “homosexual tendencies or support the so-called ‘gay culture’” are excluded from those who may join the priesthood. It would be “gravely dishonest” for a man to hide his homosexual inclinations for the sake of seeking ordination, and confessors and spiritual directors “have the duty to dissuade” same-sex attracted candidates “in conscience from proceeding towards ordination.” (No. 199-200) This statement draws from an instruction of Pope Emeritus Benedict XVI from 2005. Notably this paragraph is listed under “psychological health.”

Priests are called to not follow the “public consensus” or to yield to the temptations of the world. Instead, they need to retain their ministry as “leaders of the community” and make sure that the Church is not seen as “merely an institution.” (No. 33) They are called to lay their life down in the service of the Church, themselves being images of “Christ the Spouse” (No. 39) culminating in giving their own life in service of the Church.

The document also emphasizes priestly celibacy. “As a sign of this complete dedication to God and to neighbor, the Latin Church upholds perfect continence in celibacy for the Kingdom of Heaven as especially fitting for the priesthood.” (No. 110) “It would be gravely imprudent to admit to the sacrament of Orders a seminarian who does not enjoy free and serene affective maturity. He must be faithful to celibate chastity though the exercise of human and priestly virtues.”

At the same time, the specific mention of priestly dedication to the fight for life or the support of a pro-life culture is lacking. While many other sociological topics are discussed – like the emphasis of priests using new social media – these much more fundamental ethical topics are left unaddressed.

In general, The Gift of the Priestly Vocation appears to be a well-rounded document that explains the basis and purpose of priestly formation is first and foremost theological in nature. The raison d’être of the priesthood is God and His loving plan as well as the discipleship of Jesus.