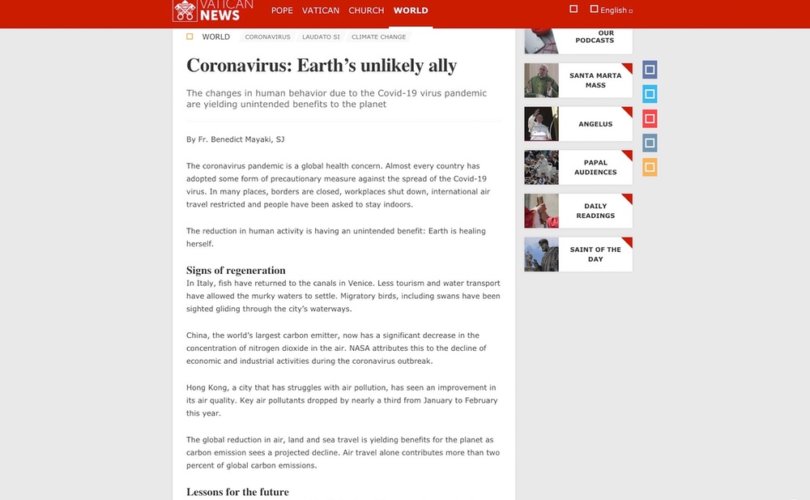 Screenshot of the Vatican News article before it was deleted

The article, written by the Jesuit priest Father Benedict Mayaki, was entitled “Coronavirus: Earth’s unlikely ally,” and its secondary headline read, “The changes in human behavior due to the Covid-19 virus pandemic are yielding unintended benefits to the planet.”

The author made no references to the tens of thousands of deaths attributed to the virus, except to say that the pandemic is “a global health concern.” However, there’s a bright side, Mayaki wrote: “Earth is healing itself,” as a result of the reduction in human activity.

“In Italy, fish have returned to the canals in Venice. Less tourism and water transport have allowed the murky waters to settle,” wrote Mayaki. “Migratory birds, including swans have been sighted gliding through the city’s waterways.”

He added that China has reduced its nitrogen emissions as a result of its lockdown measures to counteract COVID-19, and Hong Kong has experienced a decline in pollutants generally.

He also added that “The global reduction in air, land and sea travel is yielding benefits for the planet” by reducing carbon emissions.

Mayaki’s statements follow Pope Francis’ own assertions on March 22 claiming that the coronavirus pandemic is nature “having a fit” over damage to the environment.

Stating that “curiously the planet hasn’t been very clean for a long time,” Pope Francis was asked, “Is it possible that this is nature’s hour of reckoning with us?” He answered: “There’s a saying that you surely know: God always forgives, we forgive sometimes, [but] nature never forgives. Fires, earthquakes . . . that is, nature is having a fit, so that we will take care of nature.”

The Vatican News headline of the now-yanked article appears to be slightly modified version of a similar headline of a similar article by CNN published on March 20, and entitled, “There's an unlikely beneficiary of coronavirus: The planet.”

After the article was announced by Vatican News on its Twitter feed, the reaction from readers was universally negative.

Canon law professor Edward Peters asked, “Can you even begin to imagine how your words impact the tens of thousands mourning the loss of loved ones, not to mention the tens of millions suffering the destruction of their livelihoods, in the wake of this disaster?”

“Your disregard for their plight cannot be more obvious,” he concluded, and added in a second tweet, “Disgusting. Shame on the Vatican News Service for publishing this.”

Many responses referred ironically to the recent “Pachamama” scandal, in which what appeared to be an idol representing a pagan earth goddess, “Pachamama,” was venerated in a ritual in the Vatican after the images had been blessed by Pope Francis. The event has a symbol for a synod that seems to have replaced spiritual concerns with radical environmentalism.

Thomas Cole, chairman of the theology department at a Catholic prep school, called the article “disappointing,” and pointed out that it was repeating claims that had been debunked in a National Geographic article.

The claim that the environment is improving due to a slowdown in human economic activity is one that has been repeated in numerous articles in the past ten days, but at least some of the claims are false, National Geographic reported in a recent article called, “Fake animal news abounds on social media as coronavirus upends life.”

The Guardian newspaper, which ran an article on the new visibility of the fish in the canals of Venice, does not claim that the fish have “returned,” but only that they can now be seen more easily. The publication cites an environmental researcher at Venice’s Institute of Marine Science, Davide Tagliapetra, who says that the apparent cleanliness of the canals is “not due to a lack of pollution” but “the absence of motorised transport, which normally churns up the muddy canal floor,” in the words of The Guardian summarizing his statements.

Comments can be made to Vatican News at [email protected]. Readers are encouraged to be respectful in their tone.

This article has been updated to reflect that after its publication, Vatican News deleted the article entitled, “Coronavirus: Earth’s unlikely ally.”