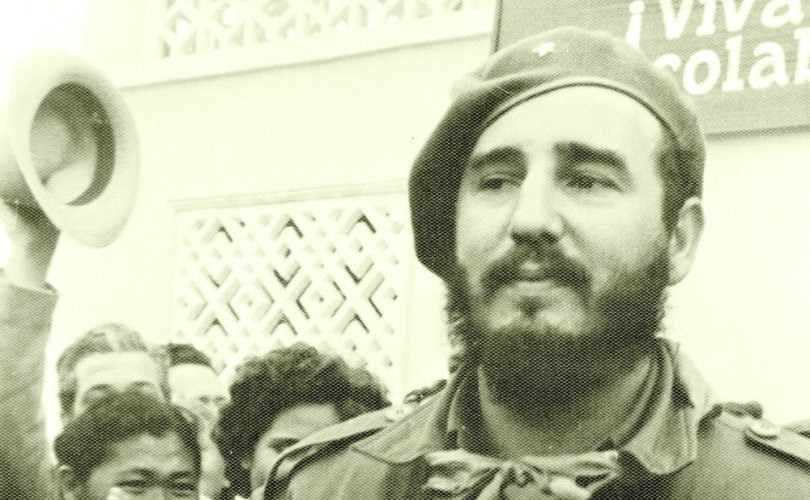 ROME, January 8, 2019 (LifeSiteNews) – An article at Vatican News, in recognition of the 60th anniversary of the Cuban revolution, disappeared from the Holy See’s website just one day after it appeared on January 1. No explanation was offered for the self-censorship of the article, which marked the rise to power of Fidel Castro and his anti-clerical Marxist government, which has long been marked by grievous human rights violations.

The Vatican News article, in Spanish, was titled “Cuba celebrates 60th year of the Revolution.” It read, “The historic anniversary was celebrated with an official ceremony in which the former chief of state and Communist Party leader Raul Castro participated in addition to current President Miguel Díaz-Canel.” It was penned by María Cecilia Mutual. Vatican News describes itself on its website as the “information system of the Holy See.”

When clicking on the original URL, a message now appears: “404 – PAGE NOT FOUND. The page you requested was not found. You could have typed a wrong address or a deleted page or the page could have moved to a new address.”

Screen grabs of the article flew around on social media before it was erased.

Monica Showalter at American Thinker commented that the article amounted to the Vatican celebrating a “catastrophe.”

“Castro runs an atheist regime.  It's not just atheist in foundation; it requires atheism for membership (and the nomenklatura perks) of its ruling Cuban Communist Party,” she wrote.

Castro shut down churches.  He expropriated all church property.  He shut down Catholic schools.  He expelled priests and, as Pajamas Media's Debra Heine notes, even a bishop.  Castro killed priests, and his regime banished Christmas. […] The Cuban revolution, so vaunted by the left, left Cuba's people morally and spiritually wasted, with all the social ills that come of being deprived of any contact with religion.  The religion there is the state.

And now the Vatican is jumping up to celebrate that catastrophe?  Not only is Cuba the hellhole that was impoverished by this so-called revolution, going from the most prosperous state in Latin America to its most impoverished, but its revolution came to and looted Venezuela, left it a nightmare husk, and created a refugee wave the likes of which this hemisphere has never seen, and it still rules the place.  Cuba is the country that turned Chile into a socialist hellhole in the 1970s and left it on the brink of civil war.  It turned all of South America into a battlefield around the same time, and it sold itself to the highest bidder in geopolitical power games to keep itself afloat.  Its vile propaganda amounts to the Black Legend of modern times.

“The Vatican wants to pay tribute to this?” she added.

The disappearance of the article came one day after an appearance of the Cuban National Circus at the Pope VI hall in the Vatican, where jugglers, contortionists, and clowns performed for Pope Francis and a large audience. Speaking in Italian, Francis said on January 2, “I want to say hello and thank the artists from the Cuban circus,” adding, “With this show, they bring beauty. A beauty that requires so much effort to do it. We have seen it. So much training, so much going on. But beauty always raises the heart, beauty makes us all better.” The pope did not use the occasion to mention Cuba’s human rights record.

Some Cuban-related media outlets wondered about the appearance of the article celebrating Cuba’s Marxist revolution on the Vatican’s news site. Panam Post, for example, noted that the revolution compelled at least one-sixth of Cuba’s people to escape the island at the risk of their lives. CubaNet observed of the Vatican’s report: “The text does not mention the enrichment of the Castro leadership at the expense of the Cuban people and neglects to mention, curiously, the regime’s murderous persecution of Catholics.”

Following the revolution in 1959, scores of Catholic activists were tortured and lost their lives in Cuban prisons. Some cried out “Long live Christ the king!” before firing squads killed them. In addition, Catholic seminaries and other religious institutions were seized by the Marxist government.

Marking the January 1 anniversary in Santiago, Cuba, Vatican News reported that a ceremony was held at the Santa Ifigenia cemetery where Fidel Castro and other communists are buried, some 5,000 miles away from the Vatican. Santiago is known as the “cradle of the Revolution” because it was there that Fidel Castro declared victory when his revolutionary forces overthrew the government of right-wing dictator el dictador Fulgencio Batista. Castro died in 2016, and was replaced briefly by his brother and fellow revolutionary, Raul. At the ceremony, Raul Castro reaffirmed that Cuba’s government will remain Marxist despite recent easing of relations with the United States. He deplored what he called U.S. “encirclement of leftist Latin American governments.”

It was Pope John Paul II who made the first official papal visit to Cuba in 1998. It was there that he was applauded by faithful Catholics when he called on “Cuba to open itself to the world and the world to open up to Cuba.” Following the visit, Christmas was again observed as an official holiday, and the government allowed priests and religious sisters to enter the country. In 2011, Pope Benedict XVI went to the island to mark 400 years of Our Lady of Charity as patroness of Cuba.

Pope Francis traveled to Cuba in 2015, where he held a private meeting with Fidel Castro. He visited a second time in 2016, and met with Kirill II, the Orthodox Patriarch of Moscow. The pope praised the diplomatic rapprochement on the part of the United States and Cuba during President Barack Obama’s administration. Upon touching down in Cuba in 2015, he said that the “process of normalization of relations” between the two countries is a “sign of the victory of the culture of encounter, of dialogue, of a ‘system of universal growth…in place of the system of dynasty and groups that is now dead forever’ as said [Cuban writer and patriot] José Martí.” The pontiff went on to say then that the relations between the U.S. and Cuba were an “example of reconciliation” to be followed by the whole world, which he said, “needs reconciliation in this Third World War atmosphere that we are living in.”