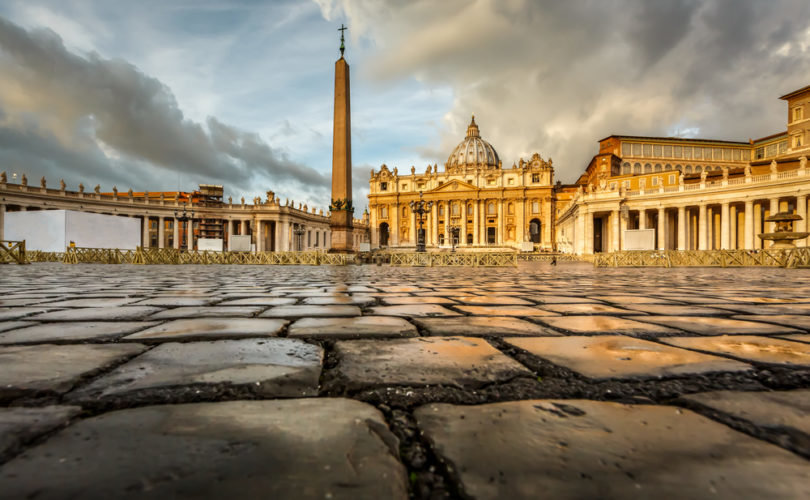 “The Pope has been receiving well wishes from around the world, including messages from leaders such as Patriarch Bartholomew and US President Joe Biden, who is a practicing Catholic,” states the July 9 English edition of L’Osservatore Romano in article on Francis’ “improving” condition after surgery.

A June report by the Catholic League has identified at least 32 times that Joe Biden has violated fundamental Catholic moral teaching since being inaugurated.

The Biden administration’s decisions flagged by the Catholic League constitute some of the grossest attacks on life, family, and religious freedoms in American history. Around one third of them were enacted within ten days of Biden taking office.

Those initial actions include executive orders reopening the military to transgender individuals, institutionalizing transgenderism in children’s schools and sports, and requiring federal agencies to treat sexual orientation and “gender identity” as “protected classes.” A statement by the White House two days after the inauguration celebrated Roe v. Wade as a “foundational precedent” and described support for the ruling as a litmus test for judicial nominees.

Four violations of core Catholic teaching highlighted in the Catholic League report took place on the same day, January 28, on which Biden revoked a ban on taxpayer funds for overseas abortions, moved to reinstate funding to Planned Parenthood and the pro-abortion U.N. Population Fund, and doubled down on foreign aid spending to promote “abortion rights.”

The following month, the White House released a “Memorandum on Advancing the Human Rights of Lesbian, Gay, Bisexual, Transgender, Queer and Intersex Persons Around the World.”

The memo “will limit the ability of faith-based organizations to assist in foreign aid,” the Catholic League said.

Biden was denied Holy Communion in 2019 because of his obstinate public support of abortion, which the Catechism of the Catholic Church affirms to be always “gravely contrary to the moral law” and an “abominable crime.” After the incident, Biden protested that it was the “only time it’s ever happened,” and that Pope Francis himself gives Biden communion.

It is notable that the Vatican has directed the U.S. bishops put the brakes on, and even dilute the language of a statement that would address the need to worthily receive Holy Communion.

The bishops voted to move forward with drafting such a document, partly in response to what Bishop Liam Cary has described as the “unprecedented situation” of a self-professed Catholic president “who is opposed to the teaching of the Church” on the grave evil of abortion.

However, current prefect of the Congregation for the Doctrine of the Faith, Cardinal Luis F. Ladaria S.J., penned a letter on May 7 to Archbishop José H. Gomez of Los Angeles, the president of the U.S. bishops’ conference, cautioning the bishops to refrain from moving forward with a national policy on worthiness for Holy Communion until “two stages of extensive and serene dialogue” have taken place.

Ladaria further advised the bishops that the statement be “framed within the broad context of worthiness for the reception of Holy Communion on the part of all the faithful, rather than only one category of Catholics.” The letter also stated that “It would be misleading if such a statement were to give the impression that abortion and euthanasia” are the “only grave matters” of Catholic teaching that demand full “accountability.”

U.S. Cardinal Raymond Burke has gone so far as to say that politicians like Joe Biden are guilty of “apostasy” that may call for excommunication.

“Such a person who claims to be a Catholic and yet promotes in such an open, obdurate, and aggressive way a crime like procured abortion is in the state, at least, of apostasy,” the cardinal said in a March interview with Thomas McKenna of Catholic Action for Faith and Family.

“In other words, to do this is to draw away from Christ and to draw away from the Catholic faith. And so the second action, which needs to be considered, is a canonical penalty, a sanction, for the crime of apostasy, which would be excommunication,” the cardinal added.

The Osservatore Romano’s misleading description of Biden as a “practicing Catholic” is not the first time the newspaper had uncritically praised world leaders. The late Catholic journalist and diplomat Michael Novak described in 2009 the Osservatore’s “glowing, star-struck, teenage praise of Pres. Barack Obama.” At the time, Novak said that the newspaper “seems not to grasp the fundamental realities of abortion politics in America.”

While the Osservatore is still seen as a semi-official Vatican publication, it has at times differed from the official position of the Holy See. In any case, the newspaper’s ties to the Pope were strengthened in 2015, when Pope Francis placed the newspaper under the management of his newly founded Secretariat for Communication, which is part of the Roman Curia.

The newspaper’s publishing of the Maltese bishops’ guidelines allowing communion for the divorced and “remarried” Catholics in 2017 may be attributed to the Pope’s closer oversight.

The Osservatore’s self-described “aim” is to provide “complete and accurate information on international affairs and the cultural debates and events happening in the Church on every continent.” The website adds, “Special attention is also paid to ecumenism and to interreligious dialogue.”