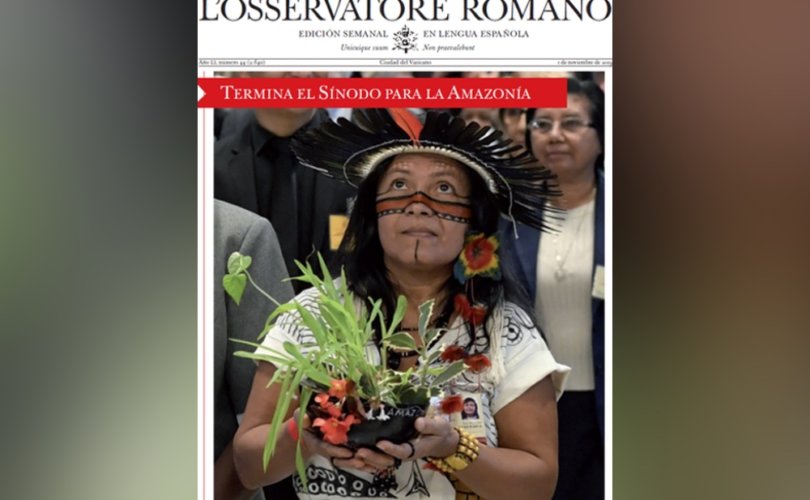 VATICAN CITY, November 7, 2019 (LifeSiteNews) ― The offering of a mysterious bowl of plants believed to be linked to the pagan goddess Pachamama — that was received by Pope Francis during the closing Mass for the Amazon Synod and placed on the altar — was featured on the cover of the Spanish version of the Vatican’s official newspaper this week.

The cover of the Spanish edition of L’Osservatore Romano for November 1, 2019 presents a photograph of Marcivana Rodrigues Paiva, a member of the indigenous Satere-Mawe people of Brazil, holding a black bowl containing earth, green plants and red flowers. Rodrigues presented the bowl to Pope Francis during the offertory procession for the last Mass of the Synod on the Amazon on Sunday, October 27. A photograph of this action appears on page 5 of the newsmagazine.

Pope Francis gave the bowl of plants to Master of Ceremonies Monsignor Guido Marini who, apparently following the pontiff’s instructions, placed the offering on the altar, in violation of liturgical norms.

At the time, Synod-watchers were relieved that wooden carvings representing a South American fertility goddess called Pachamama did not make an appearance. However, seasoned Vatican reporter Robert Moynihan subsequently discovered that pots of earth, filled with votive offerings which are then covered over with flowers, are associated with the traditional worship of the Pachamama, or Earth Mother. Moynihan linked to a guide to Pachamama worship, which encourages devotees not to leave out something red.

According to this guide, the cult of Pachamama is still strong in many parts of northern Argentina and the South American Andean region.

In an interview last week, Brazilian Catholic commentator Bernardo Küster told Dr. Taylor Marshall that the bowl of earth and greenery was itself a substitute for the carvings of the idols.

“It’s the Mother Earth …. And that vase was full of earth,” Küster said.

“So for them, it doesn’t matter if it’s an idol made of wood or if it’s a vase full of earth because to them everything is interconnected,” he continued.

“So it’s a symbol. We don’t know if that vase has been consecrated to I-don’t-know-who, but the pope asked [that] it be put upon the altar.”

Küster pointed out that liturgical rules forbid the placing of random objects on the altar. The General Instruction of the Roman Missal indicates that during the Offertory, only the bread and wine mixed with water should be placed upon the “Eucharistic table.”

The General Instruction is also clear that flowers and greenery should always “be arranged around the altar rather than on the altar table” (305).

It is unclear why Pope Francis chose to ignore these rules.

Robert Moynihan sent a letter to Monsignor Marini asking why the plant had been placed on the altar, what it represented, what was written or marked on the container, and what had happened to the plant and container subsequent to the Mass. The journalist received only a short letter saying that “there is no particular information about the plant.”

“We only know that it was planted at the beginning of the Synod and delivered to the offertory to adorn the altar.”

The veneration offered to symbols of the Earth Mother during the Synod on the Amazon has been condemned by prelates like Bishop José Luis Azcona Hermoso of Brazil, Bishop Athanasius Schneider, and Archbishop Carlo Maria Viganò.

Bishop Azcona called the prostrations of worshippers during an October 4 ceremony in the  Vatican Gardens before wooden carvings of the naked, pregnant fertility goddess “scandalous demonic sacrileges.”

In a recent interview with LifeSiteNews, Archbishop Viganò said, “The abomination of idolatrous rites has entered the sanctuary of God and has given rise to a new form of apostasy whose seeds, which have been active for a long time, are growing with renewed vigor and effectiveness.”