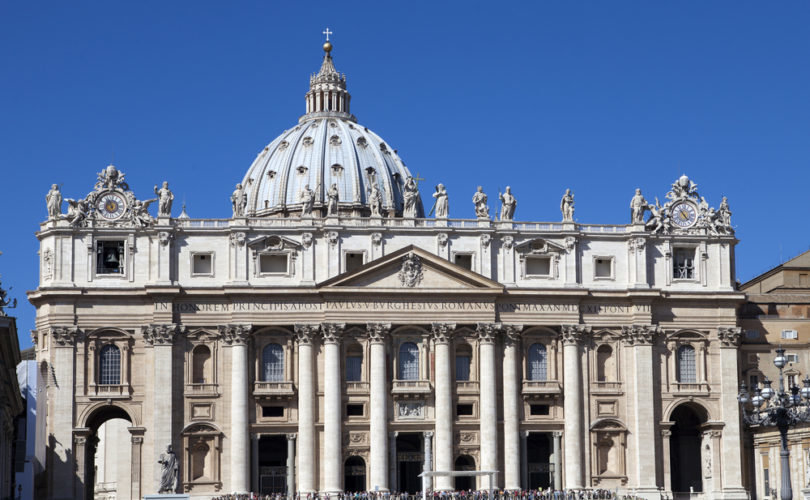 February 6, 2018 (LifeSiteNews.com) – An official of the Holy See’s Congregation for the Doctrine of the Faith (CDF) has admitted in an interview that a papal commission exists to carry out an historical review of the papal encyclical Humanae Vitae, according to Kathpress, the official news agency of the Catholic bishops of Austria.

Kathpress reports that it received confirmation of the existence of the papal commission from Msgr. Alejandro Cifres, who has long overseen the archives of the CDF and is currently the dicastery’s Chief of Office.

“It is not certain whether or not a reinterpretation of the ‘pill encyclical’ (Humanae Vitae) is coming soon from the Vatican,” stated Kathpress last week. “The fact that a commission on behalf of the Pope is investigating the genesis of ‘Humanae vitae’ was recently confirmed to the news agency Kathpress by the head of the Archive of the Congregation for the Doctrine of the Faith, Alejandro Cifres.”

However, the writings of Pope Francis are leading some of the Vatican’s theologians to contradict the encyclical, and Francis himself appeared to deny the encyclical’s teaching on the intrinsic evil of contraception in an in-flight press conference in 2016.

Archbishop Vincenzo Paglia, the president of the Vatican’s Pontifical Academy for Life, told the Spanish Catholic weekly Alfa y Omega that, “There isn’t any commission. That has been completely invented.”

In an interview with the Catholic News Agency (CNA), Paglia repeated his denial in a more qualified way, claiming that “there is no pontifical commission called to re-read or to reinterpret Humanae vitae” but added that “we should look positively on all those initiatives, such as that of Professor Marengo of the John Paul II Institute, which aim at studying and deepening this document in view of the 50th anniversary of its publication.”

Fr. Gilfredo Marengo, who was identified as the head of the commission by Roberto de Mattei, also issued a denial, claiming that the story of a commission to revise Humanae Vitae is “an imaginative report.”

Marengo told Catholic News Service that the scholars were members of a “study group” whose aim was to carry out “a work of historical-critical investigation without any aim other than reconstructing as well as possible the whole process of composing the encyclical.”

“Historical-critical” methods seek to understand texts by means of the processes that produced them as well as the social and cultural contexts in which they were written. With regard to the Bible, they have been used in doctrinally orthodox ways but have also been used to justify revisionist forms of interpretation that deny traditional understandings of Scriptural texts.

Additionally, Marengo has admitted that his “study group” has been given unprecedented access to the Vatican Secret Archives for the period of the composition of Humanae Vitae, that is, the mid-late 1960s. The archives from that period are strictly closed to scholars, and are not scheduled to be opened to them for many years.

Marengo has sought to dispel concerns that he is seeking to reconcile Humanae Vitae with Pope Francis’ confused apostolic exhortation Amoris Laetitia, but that is exactly what his recent scholarship appears to do. Last year, Marengo wrote an article for Vatican Insider called “Humanae Vitae and Amoris Laetitia,” in which he belittles the Church’s condemnation of birth control, asking if “the polemical game – the pill yes – the pill no, like today's — Communion to the divorced yes – Communion to the divorced no — is only an appearance of discomfort and strain, [which is] much more decisive in the fabric of ecclesial life.”

In the same article, Marengo parrots the reasoning of Amoris Laetitia that seeks to lower Catholic moral dogma to an often unattainable and purely abstract ideal. “Every time the Christian community falls into error and proposes models of life derived from too abstract and artificially constructed theological ideals, it conceives its pastoral action as the schematic application of a doctrinal paradigm,” said Marengo, and cited Amoris Laetitia in asserting, “We have presented a too abstract theological ideal on marriage, almost artificially constructed, far from the concrete situation and the effective possibilities of families as they really are. This excessive idealization, above all when we have reawakened trust in grace, has not made marriage more attractive and desirable, but quite the opposite.”

Paglia’s and Marengo’s denials of the existence of a papal commission to revise Humanae Vitae led the liberal Cruxnow.com to mock concerns raised by orthodox Catholic blogs about the commission’s existence, publishing an article headlined “No, Virginia, there’s no ‘secret commission’ on Humanae Vitae.”

“Perhaps the moral of the story is this: If conspiracy theorists would devote the same energy to real reporting as they do to mental gymnastics and connect-the-dots exercises, they might actually know what’s going on once in a while,” wrote Cruxnow.com writer Inés San Martín.

Correction: This story initially identified Kathpress as the German bishops' news service. However, it is actually that of the Austrian bishops.