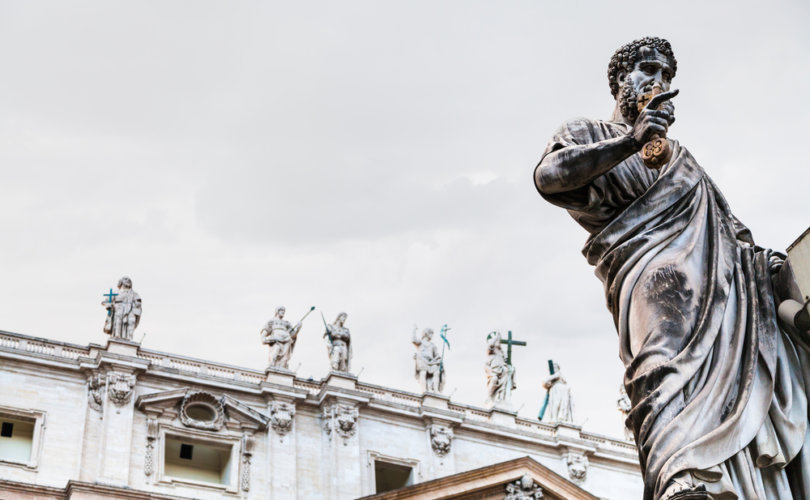 January 3, 2017 (LifeSiteNews) — Just over a year ago, a reader had a revealing and candid conversation with a Vatican official close to Pope Francis’ inner circle.

They were traveling on the same flight to Rome; the official was on his way back from the World Meeting of Families in Philadelphia, just before the 2015 Ordinary Synod on the Family.

What he said was remarkable for its rejection of orthodoxy and contempt for the core teachings of the Catholic faith.

The reader has kindly shared the contents of their exchange, one that offers valuable insights into how this pontificate viewed the Synod on the Family, Holy Communion for remarried divorcees without an annulment, and various personalities leading the Church today.

We do not doubt the authenticity of the exchange. The reader’s account of their conversation is below:

I boarded the plane and took my seat. An older, rather heavy-set Italian who looked like he’d eaten his fair share of pasta sat down next to me. We exchanged greetings, and he introduced himself as an official of the former Pontifical Council for the Family, headed by Archbishop Vincenzo Paglia.

The official seemed to feel quite free to speak, and was keen to express that he knew Cardinal Lorenzo Baldisseri, secretary general of the Synod of Bishops. There were a couple of moments during our conversation when he admitted he had spoken at length to Cardinal Baldisseri, but he could not reveal the contents of their conversation.

Our conversation quickly turned to the upcoming Synod. I simply asked questions and was sincerely listening and interested in his viewpoint. Also on this account, I think he felt free to speak. The beginning of our conversation focused a lot on the Kasper proposal,* and I was trying to understand the logic behind it.

Response: What do you do when the indissolubility is dead, when there’s no more feeling?

I thought to myself: This is the last thing a priest should say to a newly married couple who is experiencing difficulty.

After some back and forth, I asked:

Question: But what about Pope John Paul II’s Familiaris Consortio, 84?**

Response: How can we accept [“ammettere”] it? It was written 30 years ago …

Question: But what about where Pope John Paul II says, in FC 84, that according to the Sacred Scripture and Tradition, someone who’s first marriage is valid and who is in a second union can’t be admitted to Holy Communion unless they live as brother and sister.

Response: We can’t expect a man and woman who are sleeping in the same bed to live as brother and sister.

Our conversation turned to some of the people the Pope had appointed to the Synod.

Question: The Pope chose Cardinal Kasper to attend the Synod. Do you think this means the Pope agrees with Kasper?

Question: What do you think of Kasper?

Response: “He’s the most intelligent man in the room.”

Response: [Quickly he said] He’s not coming. He doesn’t count for anything; he’s too Lefebvrist.  [“Non conta per niente; è troppo Lefebvrista”]

Question: But I imagine there will be a lot of opposition from some of the bishops and cardinals at the Synod, especially from Africa, America, Poland. What will Pope Francis do?

Response: “He will listen, and then he’ll do what he wants.”

Question: But what about Pope Benedict? I don’t imagine he would agree.

Response: He’s a theologian, but he’s got no pastoral experience.

Question: And the Congregation for the Doctrine of the Faith?

Question: I heard that the Pope appointed Cardinal Danneels*** to attend the Synod …

Our conversation eventually turned to other more benign topics, then ended until we arrived in Rome. When we landed, he gave me his name and telephone number.

* The Kasper Proposal was a thesis presented by Cardinal Walter Kasper at the Extraordinary Consistory of February 2014 in which he suggested a penitential path for some remarried divorcees that would eventually lead to them being admitted to the sacraments, even though the Church has traditionally viewed such persons as living in an adulterous relationship.

** Familiaris Consortio is Pope St. John Paul II’s 1981 apostolic exhortation on the family. Paragraph 84 explicitly reaffirmed the Church’s practice, which is based upon Sacred Scripture, of not admitting to Eucharistic Communion divorced persons who have remarried. It states if these people were admitted to the Eucharist, “the faithful would be led into error and confusion regarding the Church's teaching about the indissolubility of marriage.” It also states that reconciliation in the sacrament of Penance which would open the way to the Eucharist is only possible if they live as brother and sister, abstaining from sexual relations.

*** Cardinal Godfried Danneels, the archbishop emeritus of Mechelen-Brussels, tried to cover up a sex abuse case involving a fellow bishop in 2010. An audio recording leaked to the Belgian media revealed the cardinal urged the victim not to reveal that his abuser was his uncle Roger Vangheluwe, Bishop of Bruges, until the bishop had retired. The cardinal asked the victim if he would wait until Bishop Vangheluwe retired before going public, and even told him to “ask forgiveness” and “acknowledge your own guilt”. The victim responded: “Whose forgiveness do I have to seek? I am not the one to ask for forgiveness.” Despite the cover-up and Cardinal Danneels’ controversial views on such issues as same-sex marriage and abortion, Pope Francis personally invited him to participate in both synods on the family as one of his handpicked delegates.