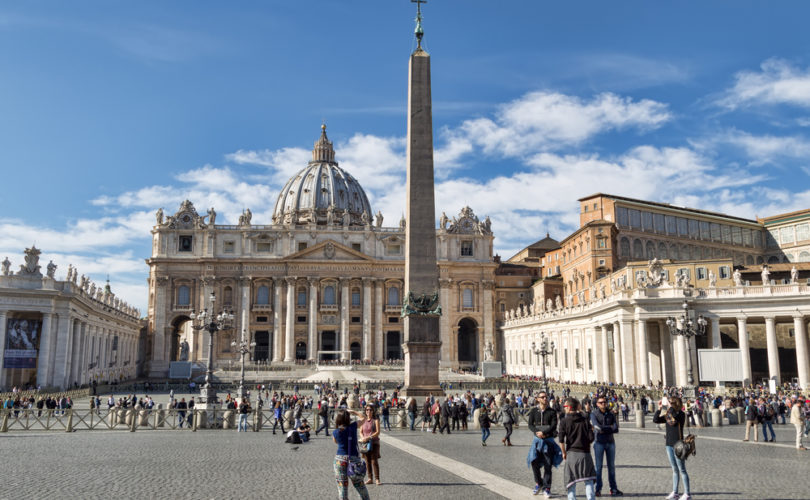 June 3, 2015 (LifeSiteNews.com) — The president of the Vatican’s Pontifical Academy of Social Sciences (PASS), appointed by Pope Francis in 2014, has slammed an American pro-life organization after it raised concerns about two leading abortion and population control proponents being given a prominent platform at the Vatican’s recent conference on climate change.

“I am appointed by the Pope and responsible directly to him. I’m afraid that leaves you and your cohort out in the cold,” Professor Margaret Archer wrote in a response to an article by Stefano Gennarini, director of the Centre for Legal Studies at the Centre for Family and Human Rights Institute (C-Fam), in which he raised criticism about the Vatican’s invitation to the abortion proponents.

Gennarini, in a May 29 article on First Things, wrote about how he asked the chancellor of the Pontifical Academy of Sciences (PAS), Bishop Marcelo Sánchez Sorondo, to explain why the Vatican gave a platform to the world’s foremost proponents of abortion and population control Ban Ki-moon and Jeffrey Sachs.

But Sorondo’s attempt to assure Gennarini that Ki-moon’s and Sachs’ position on abortion and population control were not part of the conference raised even more concerns.

“Yes. We had these discussions, and as you can see, the draft SDGs (Sustainable Development Goals) don’t even mention abortion or population control. They speak of access to family planning and sexual and reproductive health and reproductive rights,” Sorondo said in a May 18 communication to Gennarini.

Pro-life leaders from around the world have shown time-and-again that phrases such as ‘family planning,’ ‘sexual and reproductive health,’ and ‘reproductive rights’ are euphemisms for contraception, sterilization, and abortion.

Gennarini said Sorondo’s response was not only “surprising” but amounted to him “openly defy[ing] the position the Holy See has held on these terms for over thirty years because of their association with abortion.”

“The views expressed by Sánchez Sorondo are especially perplexing in light of the cooperation of PAS with Sachs and Ban Ki-moon specifically on ‘climate change’ and ‘sustainable development.’ When the logic of these theories is carried out to their full extent they inevitably collide with the Church’s teaching on abortion and population control,” Gennarini wrote in his First Things piece.

Archer, who is also a sociologist at the University of Warwick, called Gennarini’s concerns “distorted” in her response, which was published on the Vatican-run website endslavery.va.

“The nature of your questions raises some very serious questions about your understanding of Catholic Social Doctrine,” she said.

Archer, who admitted to inviting the abortion proponents to the conference, accused Gennarini of having as his “sole concern […] human dignity confined to the period between conception and live-birth.”

“Why are you so totally uninterested in vicious practices, such as human trafficking that are an offence to the human dignity and right to life that you purport to defend?” she asked.

Archer went on to accuse Gennarini of “hate,” before boasting of her “duty and privilege of advising the Church on matters of Social Doctrine and its application.”

At one point she asks Gennarini if he has a “higher moral standard than the Pope?”

“Or is your own minimalistic version of the Creed, consisting of the single item: ‘We believe in the ethical depravity of abortion’ considered to be an improvement?”

Gennarini said in a response yesterday that despite Archer’s lengthy letter, the issues he originally raised remain “largely unaddressed.”

Stephen Phelan, director of mission communications for Human Life International, told LifeSiteNews that Archer’s comments were more suited to a representative of Planned Parenthood than a Vatican official. “Honestly, we expect the spokespersons of Planned Parenthood and the United Nations to promote the false dichotomy between abortion and other assaults on human life like slavery, but to hear such a position from Vatican appointees is truly alarming,” he said.

“Using Catholic Social Teaching as a weapon against those who defend all human life requires a tremendous amount of ignorance, and this error has no place in a commission that appears to have the authority of the Holy See,” he continued. “Further, given several opportunities to do so, these appointees refuse to address the fact that their UN partners promote sterilization and the destruction of unborn human life as moral imperatives to alleviate global warming, and seem to accept the UN’s premises without adding anything uniquely Catholic to their published statements. This is exactly where the unity of Catholic social and moral doctrine is needed in statements that defend the most innocent and the poor, where a clear condemnation of population control can lead naturally into a clear defense of all creation; and instead we hear the dichotomies of the ideological far Left.”

“What are we to think about a Vatican-appointed commission where these kinds of statements are acceptable?” asked Phelan. “This must set off alarms around the Vatican, as it is entirely out of line with Pope Francis’s condemnations of the  ‘ideological colonization’ of poor countries with population control and gender ideology, both of which are UN priorities. Someone must tell the Holy Father that his appointees are invoking his name in attacks on those who defend the most vulnerable of our brothers and sisters.”