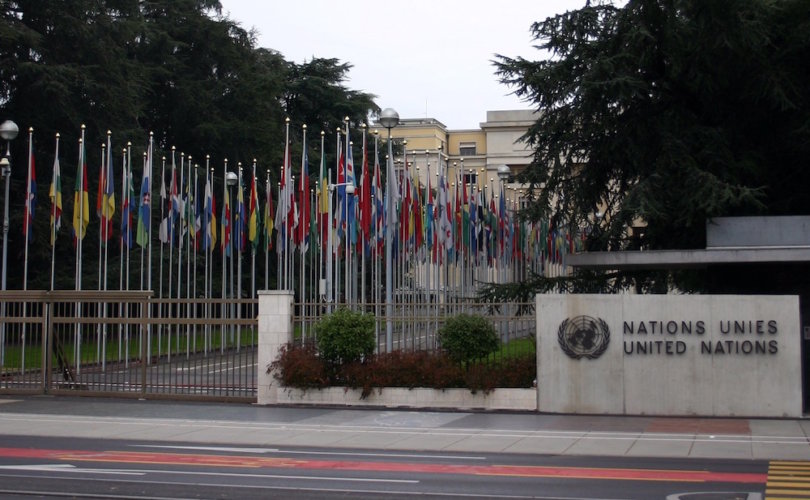 However, the representative is coming under fire because one of the 13 targets included in his praise, specifically target 3.7, calls for “universal access to sexual and reproductive health care services.” The UN defined these terms at the 1994 Cairo conference to mean providing women with “modern contraception” for “family planning” and with “safe abortion” where it is legal.

Monsignor Jean-Marie Mupendawatu, secretary to the Pontifical Council for the Pastoral Care of Health Care Workers, told the 69th World Health Assembly held in Geneva on May 25: “The Holy See delegation welcomes the vital emphasis on the dignity of the human person and the strong focus on equity expressed in the pledge that 'no one will be left behind'. This, in terms of health, is expressed in goal 3, to 'Ensure healthy lives and promote well-being for all at all ages', which has 13 targets that are underpinned by universal coverage as the key to the achievement of all the others.”

LifeSiteNews asked Monsignor Mupendawatu if the Holy See now welcomes goal 3 with its target 7 without reservations, but no reply was provided by press time.

The 17 SDGs set an international agenda for the next 15 years to end poverty, promote the well being and prosperity of peoples everywhere, and to protect the environment. But despite the lofty goals, many pro-life leaders have expressed concern that hidden within the SDGs is an anti-life and anti-family agenda.

“Target 3.7 in effect is used by the World Health Organization and UN agencies as synonymous with contraception and abortion, and very little else,” Stefano Gennarini, director of the Center for Legal Studies at the Center for Family and Human Rights (C-FAM), told LifeSiteNews.

Last year pro-life advocates became alarmed when Holy See representative Archbishop Bernardito Auza told the UN that the Vatican supported the goals and targets of the SDGs “verbatim” despite two goals having targets that call for “universal access” to “sexual and reproductive health and reproductive rights” as well as “family planning” services. Holy See spokesman Monsignor Joseph Grech told LifeSiteNews at that time that the Holy See had previously raised reservations concerning the targets and that it “cannot and will never support … anything that can undermine the Family or the Right to Life from the moment of conception.”

On May 25, instead of raising reservations about the “universal access to sexual and reproductive health care services” target of goal 3, Monsignor Mupendawatu told the assembly that more needed to be done to “combat climate change and its impact on health,” underscoring the “need for more political will and strong commitment from civil society in order to reach truly meaningful and effective global agreements on the environment.”

Voice of the Family, the international coalition of pro-life and pro-family organizations, stated in a press release that Monsignor Mupendawatu’s address to the assembly “in welcoming goal 3 and target 7 of the SDG’s, is effectively welcoming calls for universal access to abortion and contraception by 2030.”

“There has been extensive collaboration between other Holy See bodies and powerful proponents of abortion, contraception and population control during the current pontificate, under the guise of promoting sustainable development,” they wrote.

“When the Lepanto Institute pointed out that the Holy See had endorsed the SDGs ‘verbatim’ a year ago, the only response offered to explain why this endorsement held no reservations regarding the contraception and abortion supporting elements was that the Holy See had ‘already stated its reservations.’ This explanation hardly suffices given that UN agencies implementing the SDGs will ignore the diplomatic language used on the floor of the United Nations and implement the SDGs under their own vision anyway,” he told LifeSiteNews.

Hichborn said the Holy See’s recent interactions with the UN under Pope Francis should be concerning to all faithful Catholics.

“There are only two possible explanations for the Vatican's continued support of the SDGs as written: Either the Holy See's delegation is incompetent or it is complicit.  Either these individuals don't fully understand or grasp the abortive and contraceptive nature of the SDGs as they push ‘universal coverage,’ or they don't care.”

Despite concerns with the statements from Archbishop Auza and Msgr. Mupendawatu, not all delegations from the Holy See to the UN have ignored the concerning aspects.

In August 2015, Archbishop Silvano Tomasi, the Holy See’s Permanent Observer to the UN in Geneva, criticized the SDGs for containing what an implicit push for abortion under the guise of “reproductive rights.”

And in September 2015, Archbishop Auza himself made formal “reservations” on behalf of the Holy See to the SDGs’ usage of terms like “reproductive rights,” “family planning,” and “gender.” He insisted the Holy See interprets these terms only in a way that accords with the Church’s teachings.

According to Gennarini the Holy See is “still the best friend, and sometimes the only friend, the unborn has at UN headquarters.”