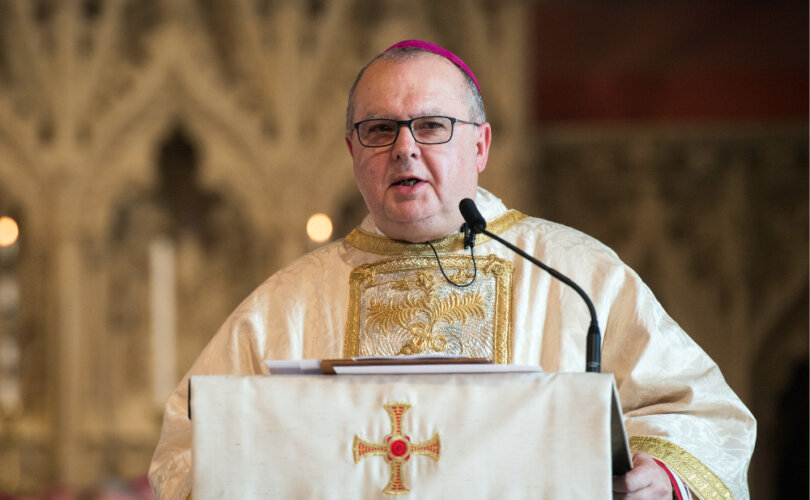 Bp. Byrne on the day of his installation as bishop of Hexham and Newcastle.© Mazur/catholicnews.org.uk

NEWCASTLE, England (LifeSiteNews) — The Vatican has ordered an investigation into the resignation of an English bishop, as allegations of a “sex party” and sex abuse have been made against the former cathedral dean and the bishop himself.

The Sunday Times reported January 22 that the Vatican’s Dicastery for Bishops has ordered an investigation into the resignation of Bishop Robert Byrne C.O., whose surprise resignation as bishop of Hexham and Newcastle was announced on December 12, 2022. The Archdiocese of Liverpool’s Archbishop Malcolm McMahon, who took over as administrator of the Diocese of Hexham and Newcastle upon Byrne’s resignation, is leading the investigation.

Byrne was only 66 when he resigned, and he had led the diocese for under four years. At the time of his resignation, Byrne informed the diocese that he felt “unable to continue serving the people of the diocese in the way that I would wish.”

Further reports on the events leading up to Byrne’s surprise resignation are now being presented. According to the Sunday Times’s new article, a “diocese source” stated:

A number of complaints were made by individuals within the diocese after information came to light about a sex party taking place in the priests’ living quarters attached to Newcastle cathedral.

Then, according to a “church source” who spoke to the Sunday Times, “[t]he cathedral had become a laughing stock.”

The cathedral dean at the time of the alleged events was Canon Michael McCoy, who was appointed by Byrne in late 2019 to replace Father Dermott Donnelly. Donnelly himself died suddenly in July 2022 after a “short illness.”

Citing “a source close to the investigation,” the Sunday Times wrote that McCoy is reported to have “approached several worshippers within the diocese asking them if they would like to attend ‘a party’ at the cathedral.” This is reported to have taken place during a COVID-19 related lockdown, under which gatherings were prohibited.

In a report published January 23, the Catholic Herald stated the parties were in fact “gay sex parties” which were attended by a local drag queen, Dan Cunningham, known as “Miss Rory,” who had considered the priesthood when younger. Other outlets also mentioned that a “drag queen” was present, although they were less specific.

LifeSiteNews contacted Cunningham about the reports, and Cunningham denied the statements about his involvement in the alleged parties.

“This is 100% untrue and there is no substance to this whatsoever. This is causing me a great deal of personal upset, and I don’t know why my name has been linked to this,” he wrote.

Both the Sunday Times and the Catholic Herald pointed out that Bishop Byrne is not believed to have attended the events at all.

The investigation will be hindered by the fact that Canon McCoy committed suicide in April 2021, four days after he was informed by the local police force that he was being investigated for sexual abuse. An inquest into his death heard that police received a “very brief account” about an alleged historical instance of abuse. Two days later, they informed McCoy and invited him for a voluntary interview, but four days after that he was found hanged in his temporary lodgings.

— Article continues below Petition —
Stand with brave priest who was SUSPENDED after defying the LGBT agenda against his abbot’s wishes!
Show Petition Text
12470 have signed the petition.
Let's get to 12500!
Thank you for signing this petition!
Add your signature:
Show Petition Text

Separate to this investigation is an investigation being conducted by the Catholic Safeguarding Standards Agency (CSSA). Hexham and Newcastle also noted that “Diocesan Trustees” had already referred themselves to the Charity Commission prior to Byrne’s resignation.

In a statement prepared for the Sunday Times, the diocese of Hexham and Newcastle wrote that it “had previously invited the Catholic Safeguarding Standards Agency (CSSA) to conduct a review following the resignation of Bishop Byrne in December 2022.”

It could be that this is in light of Byrne’s reported attempt to allow former religious education teacher and former Dominican priest Tim Gardner to stay at diocesan property after Gardner’s conviction. Gardner was convicted in 2014 of possessing over 5,000 prohibited images: some were indecent images of children, others were simply described as “indecent.” However, some of the images were among the most serious categories, depicting “rape” and “bestiality.”

Gardner was handed a 5-year sexual offences prevention order, in addition to being registered on the sex offenders register for 10 years.

While the Sunday Times reported that Bishop Byrne attempted to house Gardner in “church-owned accommodation” in the diocese of Hexham and Newcastle, the Catholic Herald stated that Byrne had offered “cathedral house” to Gardner.

The Catholic Herald also reported that Byrne had himself been accused of sexually abusing a priest. The priest, who was not named, reported the alleged event to his bishop, who is also not named.

This was then reported to an unnamed police force in December 2022, with Archbishop McMahon and the then-Papal Nuncio to the U.K. It is unclear whether this allegation emerged before or after Byrne’s resignation.

The CSSA is now beginning an “official, independent, unscheduled safeguarding audit and safeguarding review in the Diocese of Hexham and Newcastle.”

LifeSiteNews contacted the Archdiocese of Liverpool seeking further information about the alleged “sex party,” as well as the abuse allegation made against Byrne. The Archdiocese replied:

Archbishop Malcolm McMahon as Metropolitan Archbishop and Apostolic Administrator of the Diocese of Hexham and Newcastle, has been asked by the Dicastery for Bishops in Rome to prepare an in-depth report into the events leading to Bishop Byrne’s resignation.

Archbishop McMahon and the diocesan trustees of Hexham and Newcastle have invited the Catholic Safeguarding Standards Agency (CSSA) to review diocesan safeguarding, and this work started on 19 January.

LifeSiteNews also contacted Bishop Byrne, but was informed that his personal email was no longer in use.