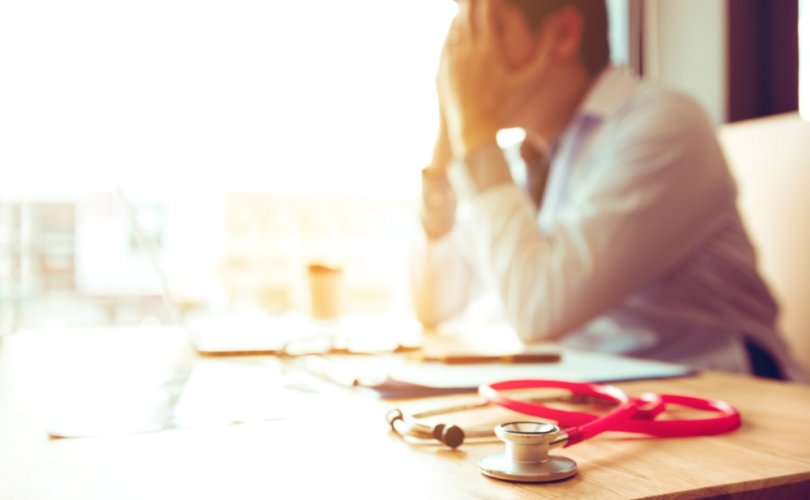 FERNEY-VOLTAIRE, France, July 20, 2021 (LifeSiteNews) — The Vatican’s pro-abortion vaccine-promotion partner, the World Medical Association (WMA), is proposing a revision of the International Code of Medical Ethics that would require physicians to refer patients to abortionists.

The Vatican’s Pontifical Academy for Life (PAL) joined the WMA for a July 2 press conference as part of their partnership to push experimental “vaccines” as it remains silent on the WMA’s proposal to axe a key conscience protection in medical ethics guidance used by governments worldwide.

In April 2021, the WMA presented a draft revision of their International Code of Medical Ethics that states, “Physicians have an ethical obligation to minimise disruption to patient care. Conscientious objection must only be considered if the individual patient is not discriminated against or disadvantaged, the patient’s health is not endangered, and undelayed continuity of care is ensured through effective and timely referral to another qualified physician.”

The European Center for Law and Justice (ECLJ) condemned this “referral obligation” in a letter to the WMA as an attempt to “normaliz[e] the practice of abortion and other non-therapeutic acts through their acceptance in medical ethics.” They further maintained that “such issues” “challenge the principle of human dignity and the preservation of life, which are at the core of a physician’s mission.”

“The consequences of referring a patient to another doctor should not be underestimated, as the doctor engages his or her conscience in the same way as if they were performing the act themselves; in effect, they are acting in a positive way and are a direct accomplice in the final outcome of the act,” the ECLJ added.

The WMA has openly supported abortion for years, having urged the pro-life Nicaraguan government in 2009 and 2019 to “repeal its penal code criminalizing abortion” and replace it with a pro-abortion law that the WMA said would allow physicians to practice “in line with medical ethics.”

ECLJ has pointed out that this is a striking departure from the WMA’s original principles as expressed in the 1948 Declaration of Geneva, which “was written to bring the Hippocratic Oath up to date,” and stated, “I will maintain the utmost respect for human life from the time of conception.”

The Oxford-based Anscombe Bioethics Centre (ABC) pointed out in a May 2021 briefing paper that if a doctor objects to infant circumcision, conversion therapy, skin whitening, or elective amputation, it would contradict the doctor's “judgement of good patient care to arrange 'effective and timely referral' to a practitioner who would provide the service.”

If past comments by the PAL’s president Archbishop Vincenzo Paglia are any indication, the Pontifical Academy for Life will not sever ties with the WMA due to their hardening pro-abortion stance.

In a 2017 paper on euthanasia presented to the WMA and GMA, Paglia stressed that the Holy See's relationship with such bodies is based on “the shared search for a common ground on which even differing opinions can find points of agreement about the truth of the human being.”

In 2019, Paglia again expressed his intention to lead PAL in “dialog[ing]” with non-Catholics, claiming that the Academy “needs to know better” certain world views “in order to widen its horizons.”

Indeed, the Pontifical Academy for Life’s reputation for Catholic orthodoxy shattered after it was thoroughly overhauled from 2016 to 2017, and Archbishop Vicenzo Paglia was appointed its new head. Pope Francis’ new statutes for the PAL no longer require its members to sign a declaration that they uphold the Church’s pro-life teachings.

Since then, PAL’s pro-life and pro-family members have been replaced with individuals who reject Catholic teaching, including pro-abortion University of Oxford professor Nigel Biggar; Professor Marie-Jo Thiel, who openly denounces the Catholic Church’s condemnation of sodomy and contraception; and Fr. Maurizio Chiodi, who claims that contraception may be morally obligatory.

The ECLJ shared that more extensive debate will take place at “WMA’s dedicated conference on the subject of conscientious objection later this year or in 2022.”