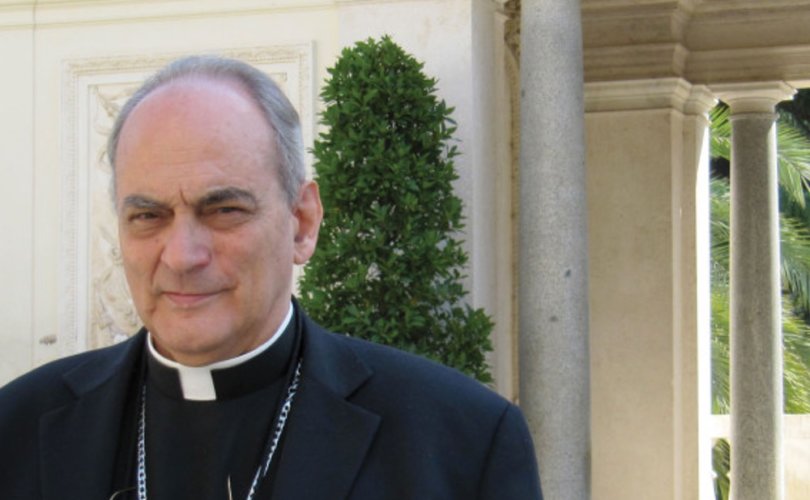 VATICAN CITY, November 13, 2019 (LifeSiteNews) ― The Holy See and the pro-abortion Rockefeller Foundation teamed up for a conference on food waste this week.

The “Conference on Reduction of Food Loss and Waste” was held in Vatican City on November 11 and 12. It was co-hosted by the Pontifical Academy of Sciences and the Rockefeller Foundation in the Casina Paolo IV.

According to a program for the two-day event, the conference opened with presentations by Bishop Marcelo Sáchez Sorondo, the Chancellor of the Pontifical Academy of Sciences, its President, Joachim von Braun, and Roy Steiner, the Senior Vice President of the Rockefeller Foundation. The objectives of the conference were for experts “to share the latest scientific evidence on how to reduce food loss and waste (FLW) and thereby contribute to global food security,” to “provide recommendations for expanded global and national actions,” and to “broaden the alliance of actors needed to make more significant improvements globally in reducing FLW.”

This history began with a donation to the American Birth Control League after its founder, eugenicist Margaret Sanger, petitioned the Rockefeller Foundation in 1924. Moved by a board member’s belief in the myth of overpopulation, John D. Rockefeller, Jr. authorized a donation of $5,000, which was the equivalent of approximately $73,423 today.

The Rockefeller Foundation was keenly interested in eugenics, and provided financial support to Berlin’s Kaiser Wilhelm Institute of Anthropology, Human Heredity, and Eugenics from 1930 until 1939. It also was a major donor to the American Eugenics Record Office until 1939.

John D., Jr’s son, John D. Rockefeller III, pushed the Rockefeller Foundation to fund at least some projects. In the 1950s, the Foundation introduced contraceptives to communities in rural India, for example. Rockefeller was unsatisfied with their conservative approach and therefore founded “The Population Council, Inc.” In 1963 the Rockefeller Foundation began its own population issues program. Today, however, it says it no longer has one, and the work is carried on by the Population Council, which has, among other hormonal contraceptives, developed Norplant for use in the developing world.

The Rockefeller Foundation also, famously funded Alfred Kinsey’s research, making possible his controversial, and nation-changing, work Sexual Behavior in the Human Male and Sexual Behavior in the Human Female. More recently, the Foundation has given large grants to such LGBT causes as the trans activist Sylvia Rivera Law Project ($100,000 in 2017). According to a press release, this project works “to improve access to gender-affirming [sic] healthcare and identity documents and increase safety and security for the most marginalized transgender communities while growing the skills, leadership, and political power of trans, gender non-conforming, and intersex people.”

Other controversial groups are involved in the food waste conference, including participants from Nestlé, which partners with a flavoring company that uses the cells of aborted babies, and the Bill and Melinda Gates Foundation. One participant hailed from the United Nations’ Environment Programme and there were two observers from the European Commission.

“There's an intrinsic scandal in the Vatican partnering on any cause whatsoever with a foundation that supported Alfred Kinsey's false sex research, and issued…alarmist ‘population explosion’ reports which recommended eugenics,” he said.

“Indeed, it was reading a Rockefeller report that convinced Harry Blackmun to switch positions on abortion and write the opinion in Roe v. Wade. Justice Ginsburg has admitted as much,” he continued.

“We should not associate with globalist elites that conspire to undermine democracy, steal resources, centralize power, or sterilize the poor.”

“This approach opens the Vatican up to criticism because it gives the impression that it doesn't really believe the Church’s teaching on such a grave issue as abortion, but sees it as one moral issue among many, and on a par with environmental concern,” Pentin said.

“It seems to be saying: ‘Food waste is such an important issue that we'll forget your views on abortion and gender ideology so we can work with you on it.’ That doesn't wash with many Catholic faithful.”

This is not the first time during the current pontificate that the Pontifical Academy of Sciences has partnered with pro-abortion activists.