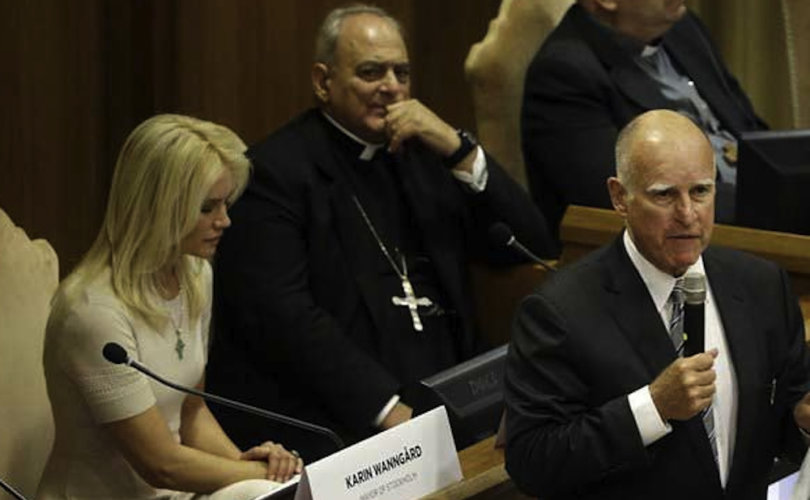 VATICAN CITY, November 30, 2017 (LifeSiteNews) — The Vatican gave social media kudos this week to California pro-abortion Governor Jerry Brown for his climate change crusade, calling him a “true leader” and extolling what it deemed Brown’s “defending the dignity and freedom of each person.”

“Bravo Jerry,” the Vatican tweet said, “you are a true leader who seeks the good of the people defending the dignity and freedom of each person, and the good of the planet threatened by human activity that uses fossil fuel!”

Brown had addressed the Vatican-conducted “Health of People, Health of Planet and Our Responsibility: Climate Change, Air Pollution and Health” conference in early November.

At the Vatican climate event, Brown said that ‘brainwashing’ was in order to get people to come around to the disputed idea of manmade climate change.

“At the highest circles, people still don’t get it,” the California Democrat said. “It’s not just a light rinse” that’s required. “We need a total, I might say, ‘brainwashing.’

“We need to wash our brains out and see a very different kind of world.”

He went on to criticize President Donald Trump for a lack of support for the climate agenda.

Just before his overseas climate tour, Breitbart’s Thomas Williams reported, Brown had threatened to sue the Trump administration over climate change during an interview with BBC radio.

Brown, a Catholic, is a fervent abortion supporter.

In 2010 while campaigning for governor, he equated abortion access with civil rights, stating, “I have fought for equal rights and against discrimination throughout my career. I have also been an uncompromising champion of a woman's right to choose. I will continue to do so if I am elected governor.”

In 2013, he signed legislation permitting non-physicians to perform abortions and reducing health standards for abortion facilities, saying the new laws “support the health and well-being of women.”

In September 2016, Brown signed a bill that would penalize pro-life investigators if they covertly record an abortion business – even if the behavior exposed is illegal.

In October 2015, he signed “The Reproductive FACT Act” that compelled pro-life pregnancy centers and medical clinics to tell women where they can get an abortion, including posting or distributing the abortion information at their facility. A judge halted the law in October of this year.

Brown signed a law in 2015 legalizing assisted suicide in California.

The Church condemns euthanasia and assisted suicide as well.

Brown’s appearance at the climate conference earlier this month was the second time he has been provided a platform at the Vatican. He was one of several proponents of various  ideologies, including one world government, population control and abortion.

Concerns continue to rise among Catholics and other pro-life supporters over the Vatican providing a platform at some of its conferences to individuals advocating things in conflict with Church teaching, typically under the guise of anti-poverty and climate change initiatives.