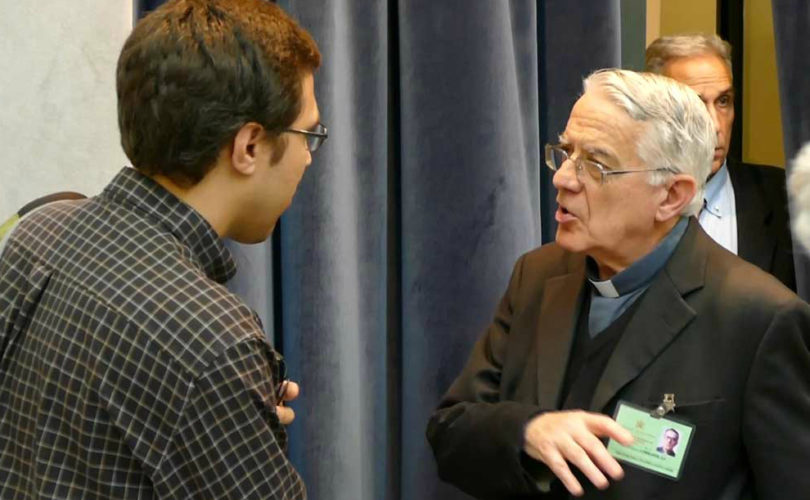 ROME, October 13, 2015 (LifeSiteNews) – The director of the Vatican’s press office today tried to downplay concerns about how the Synod on the Family is being run in the wake of Monday’s revelation that a group of senior cardinals had raised serious objections in a direct appeal to the pope.

Father Federico Lombardi urged the public to focus on the “positive trend” of the Synod and avoid getting into “confusion and debate.” The person who put out the letter, he said, “really disrupted the whole procedure” of the Synod.

During Tuesday’s press briefing, LifeSiteNews asked Father Lombardi whether the pope had addressed the cardinals’ concerns, noting that Cardinal Pell’s statement did confirm both the existence of the letter and the fact that there is indeed concern among the Synod fathers. Fr. Lombardi declined to respond during the press conference but approached LifeSiteNews for an interview afterwards.

Pell’s statement said: “Concerns remain among many of the Synod Fathers about the composition of the drafting committee of the final relatio and about the process by which it will be presented to the Synod fathers and voted upon.”

The commission drafting the Synod’s final report, composed of ten members appointed by Pope Francis, has been criticized for largely supporting liberal proposals. Critics have also objected to the fact that this year Synod fathers must make one vote, yes or no, on the entire final report, rather than voting on individual paragraphs as before.

Speaking with LifeSiteNews, Fr. Lombardi said it is “normal” that there would be difficulties when adopting a “new methodology” for a Synod. The members of the drafting committee, he said, “have been chosen, approved by the pope, and if you discuss now the methodology you don’t go anywhere. It is decided and we go on in this way with these rules … and everyone tries to do the best with this.”

He said they may find a better approach in the future, but “it is not good now to try to change a system that has already gone [forward].”