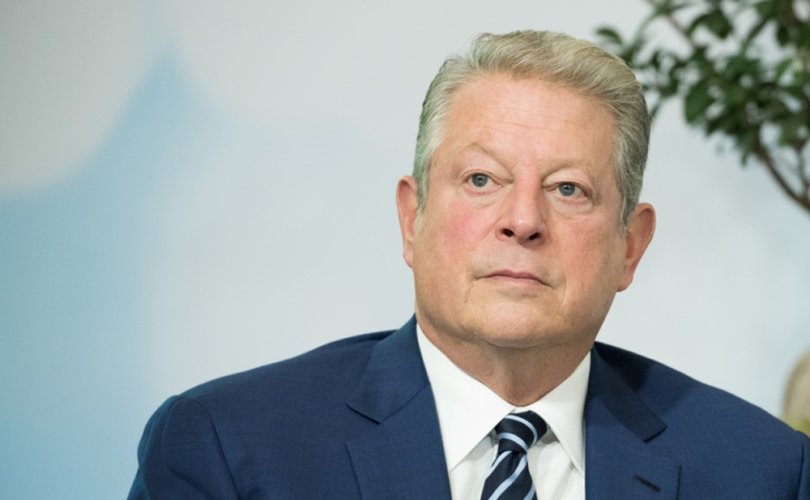 “In particular, his papal encyclical, Laudato si, marked a crucial step for the Catholic church in leading the world to commit to addressing the climate crisis ahead of the Paris Agreement,” said Gore. “Virtually all of my Catholic colleagues and friends are thrilled to the marrow of their bones that he is providing this kind of spiritual leadership. As am I.”

The former Vice President spoke about Pope Francis in an interview with the Vatican News service published July 4.

Gore sees the pontiff as playing a unique role in the globalist crusade against “global warming” because of his position as head of the Catholic Church, and he hopes other religious leaders will follow suit.

“Spiritual teaching obviously plays a crucial role in communities around the world,” continued Gore. “The Pope is a model for leaders of other faith traditions to communicate the dangers posed by the climate crisis and our duty as stewards of God’s creation to solve it.”

In Pope Francis, the globalists have found a willing participant in what many view as a manufactured crisis, meant to concentrate more power and influence under global elites while escaping genuine scientific scrutiny.  Global warming, now known as “climate change,” is increasingly perceived as suspect, based on manipulated scientific data and unreliable computer modelling, and so has become difficult for promoters such as Gore to justify and sustain.

Prof. Michael Hart, author of  Hubris: The Troubling Science, Economics, and Politics of Climate Change, told LifeSiteNews in a 2016 interview that globalists are using the “poorly understood science of climate change to advance an ambitious environmental agenda focused on increasing centralized control over people’s daily lives.”

He said Pope Francis was being “naïve and unwise” in “commenting favorably on the climate change movement” as found in his encyclical Laudato Si’.

When asked if climate change was a real issue, he replied: “No, the real issue is the hunger for power to change economic and political systems in order to achieve a wide-ranging agenda. In the words of former UNFCCC Secretary Christiana Figueres, the goal of ‘the whole climate change process is the complete transformation of the economic structure of the world.’”

Critics have pointed out that if “climate change” can be successfully converted from a scientific issue to a spiritual one in the largest church in Christendom, then the globalist quest to centralize power under their control becomes much easier.

“The climate crisis is now the biggest existential challenge humanity has ever faced,” asserts Gore, who does not shy away from attempting to exploit Scripture to find moral authority for his cause. “And it is not only humanity that is at risk; according to the world’s biologists, up to half of all the living species with which we share this Earth are in danger of extinction during this century. When Noah was instructed to gather two of every species in his ark in order to ‘keep them alive with thee,’ I believe that instruction is also meant for us.”

LifeSiteNews’ Steve Jalsevac warned in 2014 that global warming/climate change has become a “cultish religion” that is replacing true religion.

“Today’s persistence of the global warming/climate change alarmism in the face of the mountain of evidence in recent years undermining their claims has changed the movement into more of a cultish religion,” observed Steve Jalsevac in 2014.  “Its adherents are doing whatever they can to convert the entire world to their one religion which has as its goal to change how all people and nations of the world live their lives.”

“Sadly, Catholic hierarchy, bishops’ conferences and even the Vatican have been entering into support of this movement and controversy which is far beyond their realm of competence,” continued Jalsevac.  “They see it a ‘social justice’ issue, but the difficulty is in sorting out who is really telling the truth. It is noteworthy that the usual liberal, social justice minded Catholics who place the life and family issues as a low priority are usually the Catholics who are most into the global warming, bottled water, environmental issues and changing political structures agendas as their highest priorities.”

“There is much evidence that the climate change movement is the latest and largest-ever-in-history scheme by globalist elites to impose a secularist, anti-life and anti-family New World Order with world governance and removal of all national borders,” wrote Jalsevac last year.  “It would ultimately destroy most of the traditional rights and freedoms and sovereignty of individual nations that have been won at great cost in the past.”

“Opposing the climate change movement, which Cardinal George Pell astutely saw as symptomatic of a pagan emptiness, is also about resisting an international assault on Christian civilization,” said Jalsevac.  “More have come to see this, regardless of the aggressive support for the climate change movement and world governance by Pope Francis, his many globalist friends who are close associates of George Soros, such as Jeffrey Sachs and Ban Ki Moon, and many progressive, high level clerics in the institutional Catholic Church.”