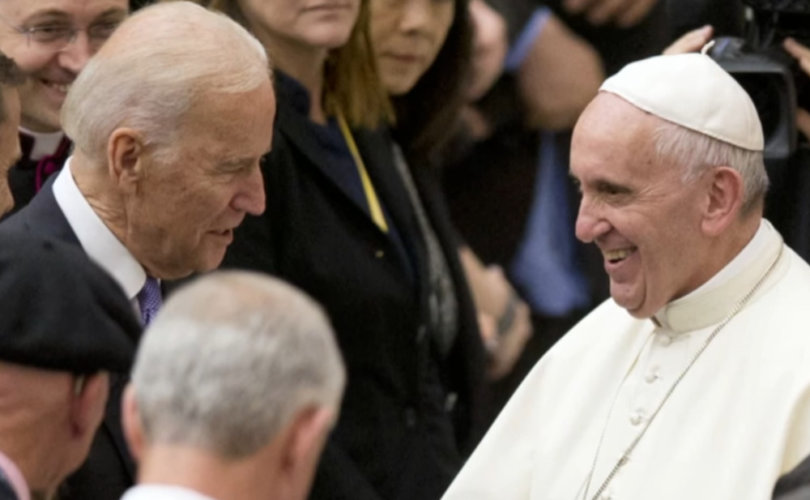 UNITED STATES, May 10, 2021 (LifeSiteNews) — The Vatican is warning the United States’ top bishop that a forthcoming policy on giving Holy Communion to pro-abortion politicians who call themselves Catholic, such as President Joe Biden, may become a “source of discord” for the country’s episcopate and would unfairly target “only one category of Catholics.”

In a May 7 letter to U.S. Conference of Catholic Bishops (USCCB) President Archbishop José H. Gomez, the prefect of the Congregation for the Doctrine of the Faith (CDF) Cardinal Luis F. Ladaria referred to “pro-choice politicians” and “pro-choice legislation,” deviating from former Vatican documents that had referrered to politicians or laws that favor, promote, or authorize abortion, thus always mentioning the evil by name.

The letter, according to America Magazine’s Gerard O’Connell, comes as a response to a March 30 letter from Gomez to the CDF in which the archbishop stated that the USCCB is drafting a document on worthiness to receive Communion by politicians calling themselves Catholic who champion abortion and other anti-life-and-anti-family legislation.

Ladaria thanked Gomez for informing him of Gomez’s plan to send the USCCB’s draft text on worthiness to receive Communion to the CDF “for an informal review, prior to its submission to the body of bishops for a vote.”

The CDF, Ladaria said will not honor Gomez’s request that it make available a 2004 letter from Cardinal Joseph Ratzinger, then prefect of the Congregation for the Doctrine of the Faith, to former Cardinal Theodore McCarrick that laid out general principles on worthiness to receive Holy Communion by Catholic politicians who champion anti-life policies. Ladaria wrote that since Ratzinger’s letter was “in the form of a private letter to the bishops” and that Ratzinger had specified that “these principles were not intended for publication,” the CDF would continue to honor this request.

Nevertheless, the content letter has been publicly available since 2004, when journalists first published it.

The principles contained in Ratzinger’s 2004 letter may assist the U.S. bishops in drafting their own document on reception of Communion, Ladaria wrote, but they “should only be discussed within the context of the [CDF’s 2002] authoritative doctrinal note” on this matter, which is titled “On some questions regarding the participation of Catholics in political life.”

During the U.S. bishops’ 2019-20 ad limina visits to Pope Francis, the CDF had “advised that dialogue among the bishops be undertaken to preserve the unity of the episcopal conference in the face of disagreements over this controversial topic.” The “formulation of a national policy was suggested during the ad limina visits only if this would help the bishops to maintain unity.” “The congregation notes that such a policy, given its possibly contentious nature, could have the opposite effect and become a source of discord rather than unity within the episcopate and the larger church in the United States.”

Such discord has been present among U.S. bishops for a long time. The 2004 letter by Ratzinger was concealed from fellow bishops during their general assembly in October of that year. “McCarrick did not even provide the gist of Cardinal Ratzinger’s letter which outlined in six successive points why communion ‘must’ be denied in the specified cases,” wrote LifeSite’s John-Henry Westen at the time. He did however speak about a bracketed afterthought at the bottom of Cardinal Ratzinger’s letter which spoke of reception of communion for Catholics who vote for pro-abortion politicians.”

Earlier in 2004, then-Archbishop Raymond Burke had said, “I would have to admonish [pro-abortion Sen. John Kerry] not to present himself for Communion. I might give him a blessing or something.”

That discord is still present to this day. Whereas Bishop Robert McElroy of San Diego recently wrote a piece for America Magazine decrying the public calls for pro-abortion politicians to be denied Holy Communion, Archbishop Salvatore Cordileone argued that such politicians merit a public “correction” for their “public rejection of Catholic teaching” that is not limited to “exclusion from the reception of Holy Communion” but may also include “excommunication.”

Additionally, a number of other high-profile Catholic shepherds, including Cardinal Raymond Burke, Archbishop Samuel Aquila, and Archbishop Joseph Naumann have come out publicly defending the position that pro-abortion Catholic politicians must be denied Communion to safeguard the sacrament, to avoid scandal, and to call the sinner to repentance. Among the bishops siding with McElroy are Cardinal Wilton Gregory of Washington, D.C., Bishop John Stowe of Lexington, Kentucky. Gregory has gone as far as saying that, despite Canon Law 915, which makes it clear that Catholics who are “obstinately persevering in manifest grave sin are not to be admitted to holy communion,” he would, nevertheless, give Biden Holy Communion.

Nonetheless, Ladaria pointed out that the CDF has already advised U.S. bishops to engage in two stages of “extensive and serene dialogue” prior to drafting any document on the matter. The first dialogue should be among bishops, with the goal of reaching a doctrinal agreement so as “to maintain unity.” The second dialogue should be between bishops and Catholic politicians “within their jurisdiction who adopt a pro-choice position regarding abortion legislation, euthanasia, or other moral evils, as a means of understanding the nature of their positions and their comprehension of Catholic teaching.” Ladaria did not acknowledge that this kind of dialogue and debate among bishops and the faithful has taken place for years, albeit not in a formal setting.

Once dialoguing is complete, the USCCB “would then face the difficult task of discerning the best way forward for the church in the United States to witness to the grave moral responsibility of Catholic public officials to protect human life at all stages,” Ladaria wrote. If the USCCB decides “to formulate a national policy on worthiness for Communion,” then “such a statement would need to express a true consensus of the bishops on the matter, while observing the prerequisite that any provision of the conference in this area would respect the rights of individual ordinaries in their dioceses and the prerogatives of the Holy See.”

In the letter, the CDF “advises” the USCCB that “any statement of the conference regarding Catholic political leaders would best be framed within the broad context of worthiness for the reception of Holy Communion on the part of all the faithful, rather than only one category of Catholics, reflecting their obligation to conform their lives to the entire Gospel of Jesus Christ as they prepare to receive the sacrament.”

Regarding the USCCB’s position that abortion is “the pre-eminent” moral issue, “it would be misleading if such a statement were to give the impression that abortion and euthanasia alone constitute the only grave matters of Catholic moral and social teaching that demand the fullest accountability on the part of Catholics.” The U.S. bishops should make “every effort…to dialogue with other episcopal conferences [around the world] as this policy is formulated in order both to learn from one another and to preserve unity in the Universal Church.”

The USCCB was expected to talk about pro-abortion politicians and the reception of Holy Communion at its upcoming June meeting. Rumor swirled of the bishops drafting a document on “eucharistic coherence” that may be voted on at the meeting. It remains to be seen what effect Ladaria’s letter will now have on the plan.

While Pope Francis has promoted a vision of a “synodal” Church will individual bishops’ conferences largely direct how the faith is expressed in lived in their own regions, this has not stopped him from intervening in the U.S. Church on a number of occasions.

Most recently, the Vatican ordered the USCCB in January to hold back a statement on then-incoming President Biden that called attention to his pledge to pursue anti-life and anti-family policies that would advance “moral evils” in the areas of “abortion, contraception, marriage, and gender.” The statement was only allowed to be released after Pope Francis first extended his “cordial good wishes and the assurance of my prayers” to then-incoming pro-abortion President.

In a 2018 intervention, the Vatican directed the USCCB in a last-minute instruction to hold off voting on measures during their annual meeting that aimed at addressing the sexual abuse crisis in the U.S. Church.

While the Vatican is very involved in directing the U.S. church, it has had a more hand’s off approach in the church in Germany where the country’s bishops are currently walking down their “Synodal Path” that appears to be leading to a departure from the Church’s teaching on the priesthood, marriage, and sexual morality.