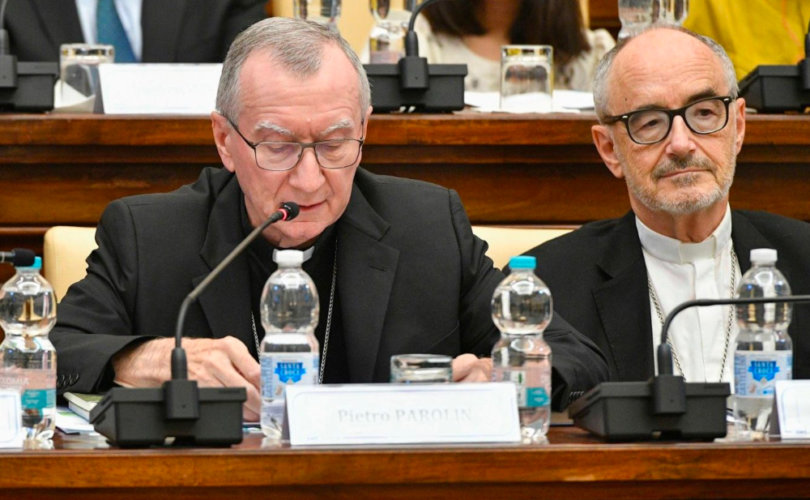 VATICAN CITY (LifeSiteNews) – The Vatican reaffirmed its commitment to the pro-abortionParis Agreement on “climate change” yesterday, holding a conference in conjunction with U.N. officials.

In a meeting held in the Casina Pio IV, Vatican Secretary of State Cardinal Pietro Parolin joined forces with officials from the Pontifical Academies of Sciences and Social Sciences, along with Simon Stiell, the executive secretary of the U.N. Climate Change Secretariat.

The Vatican made a surprise announcement on July 8, declaring that it had formally joined the United Nations Framework Convention on Climate Change (UNFCCC) and the Paris Climate Agreement, having delivered the required documentation to the United Nations on June 6.

Both documents entered into force for the Vatican City State on October 4. It was in order to “celebrate this important moment,” wrote the Pontifical Academy of Sciences, that yesterday’s conference was organized.

The event was also to mark the first anniversary of the Vatican’s 2021 “climate change” event, “Faith and science: Towards COP26,” which was held in the Apostolic Palace on October 4, 2021.

Vatican meeting tomorrow is to include heads of the IPCC & UN Climate Change Secretariat. The aim is to re-stress the Pope’s climate concerns including his push for “integral sustainability,” a “circular economy” and decarbonisation. The Vatican aims to achieve “net-zero” by 2050 pic.twitter.com/ExhEIgIjib

In its press release, the Pontifical Academy of Sciences wrote that Tuesday’s event was to “relaunch this message of hope and courage in a specific historical moment, like the present one, where the pressures against multilateralism and international dialogue are heightened even while the opportunities offered to humanity for a real ‘ecological conversion’ are actual and present.”

Led by Cardinal Peter K.A. Turkson – Chancellor of the Pontifical Academies of Sciences (PAS) and Social Sciences – and the PAS president Joachim von Braun, a number of other high ranking members of the Roman Curia were present, including:

Leading political figures also took part in the “moment of reflection,” with Stiell being the most notable. He was joined by Hoesung Lee, chair of the Intergovernmental Panel on Climate Change, along with ministers from Egypt, Senegal, Fiji, and Monaco. Egypt is hosting the next “climate change” conference, known as COP 27, next month. Pope Francis has previously sent messages of encouragement to global leaders at COP events, urging them to pursue the “ambitious goals” outlined in the Paris Agreement on climate change, saying they “can no longer be deferred.”

“The so-called socio-ecological crisis is a propitious moment for our conversion and for decisions that can no longer be postponed,” he said.

Parolin warned against “climate change” being “overshadowed” by other global issues, and called for “new lifestyles, based on development and sustainability, fraternity and cooperation between human beings and the environment.”

Meanwhile, Stiell thanked the Vatican for its “courageous” act in joining the Paris Agreement, saying that such actions are needed to “implement transformative change and avoid a global catastrophe” that “will change our climate, our world and our lives. For the worse, forever.”

LifeSite’s Dr. Maike Hickson noted how one speaker at yesterday’s conference, Joachim von Braun, has previously highlighted at the Vatican how children could be used to “play critical roles as agents of change in their families and communities” regarding the U.N.’s Sustainable Development Goals (SDGs).

Lauded by “climate change” activists as a document which could usher in seismic change to save the world from natural disasters, the Paris Agreement is an international contract purportedly aimed at reducing global average temperatures, but which includes as part of its goals the expansion of abortion and contraception, among other population control measures.

As already noted on numerous occasions by LifeSiteNews, the Paris Agreement is indeed pro-abortion and connects to the stated U.N. goal of creating a universal right to abortion in line with Goal #5.6 of the U.N.’s Sustainable Development Goals.

— Article continues below Petition —
Join Bishops in calling out Pope Francis' statement for contradicting the faith
Show Petition Text
5632 have signed the petition.
Let's get to 6000!
Thank you for signing this petition!
Add your signature:
Show Petition Text

Archbishop Viganò, the former papal nuncio to the United States, has linked the passion surrounding “climate change” to a desire for increasing governmental control over daily life. Writing in May 2021, Archbishop Viganò noted that green policies would become the successor to COVID mandates: “Even if the pandemic farce does not have the desired effects due to unforeseen events, we already have the next step ready: the climate emergency as the pretext for imposing the ‘ecological transition’ and ‘sustainable development.’”