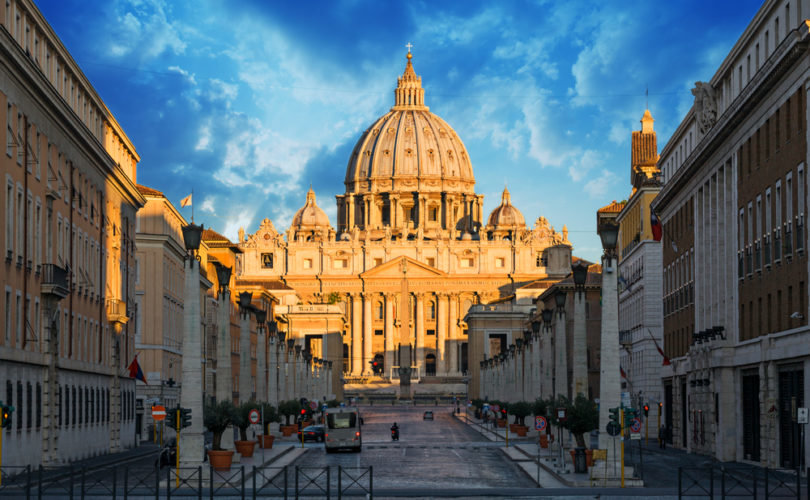 VATICAN CITY, September 15, 2017 (LifeSiteNews) – A senior member of the Vatican U.S. embassy staff in Washington was recalled after a request from U.S. prosecutors for him to be charged and tried in a child pornography case, Vatican and U.S. officials said.

The diplomat, a priest, is suspected of possessing, though not producing or disseminating, child pornography, including images of prepubescent children, the Associated Press reported, citing a U.S. source who is familiar with the investigation and speaking on the condition of anonymity.

The Vatican said in a statement on Friday that U.S. State Department notified the Vatican Secretariat of State of “a possible violation of laws relating to child pornography images.”

The Holy See said it recalled the priest in keeping with the practice of sovereign states, and that he is currently in Vatican City.

The Vatican Tribunal has also launched an investigation, according to the Vatican press office statement.

The State Department asked the Vatican to lift the official’s diplomatic immunity on August 21, the AP report said, and the request was denied three days later. For the State Department to make such a request, it said further, State Department lawyers would have been certain there was reasonable cause for criminal prosecution.

The reasons prompting the State Department request were not known, and the Department of Justice, as the office that would bring charges, did not immediately offer comment.

A U.S. official familiar with the case confirmed the priest was a senior staff member for the Vatican embassy.

The Vatican had begun requesting specifics in the case from the U.S. and said that as a preliminary inquiry the investigation was subject to confidentiality.

Pope Francis’ financial czar, Australian Cardinal George Pell, is currently facing sex abuse allegations in his home country. Cardinal Pell, who has been attempting to reform Vatican finances, is the highest-ranking Catholic official to be charged with sex abuse, has categorically denied the charges.

He promised zero tolerance for clergy sex abusers in 2014 and set up a commission to investigate allegations against priests and care for victims. He spoke out strongly against clergy sex abuse again later that year and again in May 2016, saying abusers must be severely punished. Shortly thereafter, he released an update to the policy for removing bishops suspected of neglecting clerical abuse cases.

Pope Francis restated zero tolerance again this past January, directing bishops in a letter to “adhere, clearly and faithfully, to ‘zero tolerance'” for sex abuse of minors.

While some have criticized the pope for not speaking more strongly against abuse and not acting more firmly against abusers and those who have covered up abuse, still others have pointed to instances where his actions in some serious cases don’t match his tough stances on abuse.

The Vatican removed its ambassador to the Dominican Republic, Monsignor Jozef Wesolowski, in 2013 after he was accused of sexual abuse.

A Vatican court later defrocked him, and the priest passed away before a criminal case could proceed.