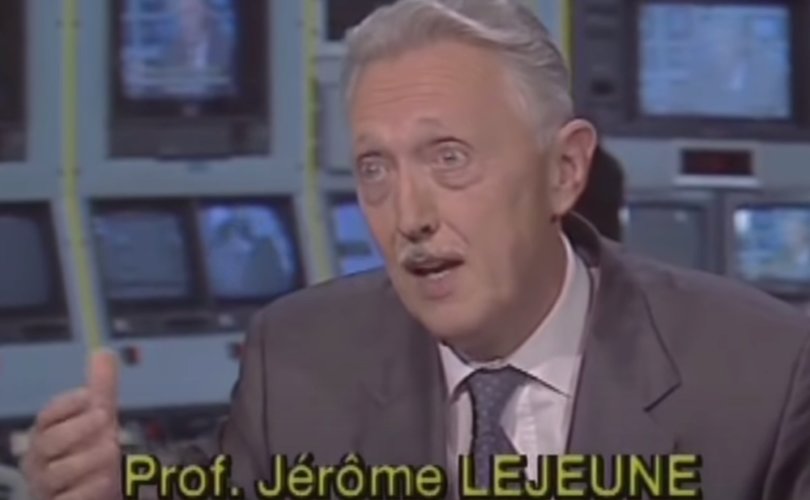 February 1, 2021 (LifeSiteNews) – The “heroic virtues” of the historic figurehead of the French pro-life movement, Professor Jérôme Lejeune, were officially recognized on Thursday, January 21st by Pope Francis in a decree that has opened the way to his beatification. By virtue of the papal decision, Jérôme Lejeune was declared “venerable,” after a lengthy investigation into his life and actions initiated in 2007, thirteen years after his death on Easter Sunday, 1994.

Jérôme Lejeune, a medical doctor and researcher in the field of genetics, obtained worldwide fame in 1958 when he discovered the cause of Down Syndrome, or “trisomie 21” as he called it: people suffering of this “malady of the intelligence” carry an extra copy of the 21st chromosome, he discovered, a genetic anomaly that could not be ascribed to the responsibility of these children’s parents as was previously thought. He would dedicate his life to helping both the children and their families, hoping to find a treatment and above all proclaiming the right to life of the tiniest of human beings, fighting for the protection of the little “Tom Thumbs” that are in danger of destruction through the crime of abortion.

The decree was published by the Congregation for the Causes of Saints at a crucial moment in the French political agenda: several laws are under discussion in Parliament that would extend legal abortion without conditions from 12 to 14 weeks’ gestation, do away with medical personnel’s right to conscientious objection regarding abortion, allow embryo research on principle, legalize research on “chimeras” – beings created using both animal and human cells – and provide for “medical abortion” up to term for women in “psycho-social distress.”

Bishop Marc Aillet of Bayonne welcomed the news of this important step towards Lejeune’s possible future beatification and canonization in a tweet: “At a time when some are debating the extension of the legal delay for abortion, Pope Francis has just recognized Prof. Jerome Lejeune Venerable! How considerate is God who does not abandon his people and who gives us a new intercessor for the defense of unborn Life!”

The recognition of “heroic virtues” is a term used in the complex process of declaring a person a saint of the Catholic Church to whom the faithful pray, asking their intercession before God. By this recognition, the Church proclaims that Jérôme Lejeune practiced the theological virtues (faith, hope and charity) and the cardinal virtues of prudence, justice, temperance and fortitude, in an exemplary fashion that deserves to be imitated. The process involved meticulous examination of Lejeune’s life, writings, acts and attitudes

In the normal course of a process of beatification, a miracle through the intercession of Lejeune will be required to declare him “Blessed,” and yet another miracle in view of canonization which would officially make him a saint. This means that Catholics can now be encouraged pray with that intention in mind.

Aude Dugast, “postulator” for the cause of Jérôme Lejeune – the person who presented all the arguments in his favor to the Congregation for the Causes of Saints – told the French weekly Famille chrétienne:

“At a time when our society is calling into question the most fundamental certainties about the human person, Jérôme Lejeune remains a passionate and courageous witness to truth and charity. He put his talents and his faith at the service of the dignity of his little patients who were wounded in their intelligence, and at the service of the life of all unborn children. He spent himself selflessly for his patients and for the defense of human life, heartened by this sentence of Christ in the Gospel: ‘as long as you did it to one of these my least brethren, you did it to me’,” she said.

Jérôme Lejeune was born in Montrouge, a Parisian suburb, in 1926. During World War II, his family moved further away from Paris and young Jérôme was tempted to become an astronomer, a mathematician, an actor or a musician. He finally chose medicine and through a twist of fate – missing an important exam to become a hospital intern through his own absent-mindedness – turned to research, while always continuing to look after patients. He fell in love with a young Danish student, Birthe: the couple soon married and had eight children. Birthe, who outlived her husband for 26 years, playing an important role in the “Jérôme Lejeune Foundation” that has carried on the research and the fight for the rights of the unborn of its namesake, died only a few months ago. Rome appears to have waited for this event before formally declaring her husband “venerable.”

Jérôme and Birthe lived their whole married life in a medieval house in the heart of Paris – a home full of soul and character – and Jérôme himself could be seen cycling through the streets as he went to his hospital consultations, his laboratory and the “School of Medicine” where he taught genetics even during the student strikes of May 1968, refusing to submit to the disorders of the time.

Jérôme’s discoveries in the field of genetics and genetic anomalies turned out to be double-edged. On the one hand, they were necessary to change the general perception of people with disabilities. On the other, as prenatal testing developed, they were instrumental in enabling eugenic abortions, to the point where today in France, more than 96 percent of babies identified as having Down syndrome before birth are killed, often in late-term so-called “medical” abortions. As Aude Dugast showed in her monumental and also deeply sympathetic biography of Lejeune – Jérôme Lejeune, la liberté du savant –written at the conclusion of years of study of archives and documents and meetings with his family, this aspect of his research tormented him. Lejeune remained convinced until the end of his life that a cure could be found. He would have been happy to learn that Dr Laurent Meijer, a researcher funded by the Fondation Lejeune, has reached a critical and potentially successful procedure that would help patients with Down syndrome or Alzheimers to gain cognitive capacity.

Meanwhile, in the 1960’s, after having been awarded the Kennedy prize in 1962, Lejeune had become increasingly aware of the approach of mainstream research, that aimed to track malformations and genetic illnesses before birth in order to eliminate the unborn that were not considered up to standard.

In 1969, Lejeune went to the US to receive the William Allan Award from the National Institute of Health . He chose to “shock” his audience by affirming the right to life of the human embryo, a fellow member of our species, while at the same time condemning the Darwinian theory of evolution.

“No matter how we tackle the problem, it follows from the actual findings that the present-day human karyotype must have appeared first in an extremely small group, even as small as one couple, and must have maintained itself constant, simply because it was the very best solution. It follows also that mankind is a biological unit of which races are variations with no precise boundaries. Hence the old idea that human beings are brothers is not an ethical hypothesis or a purely moral goal, but simply a correct expression of plain reality. The recognition of such brotherhood is very comforting, but increases our concern as human geneticists for the destiny of those unfortunate children who do not share equitably our chromosomal heritage,” he said. He imagined a National Institute of Health that would determine which embryos would be destroyed considering their “undesirable genes or chromosomes,” and suggested it should be called the National Institute of Death.

Lejeune knew he was rowing against the tide; he was indeed conscious of compromising his own work and the recognition of his peers. That same evening, he wrote to Birthe: “Today, I lost my Nobel Prize in medicine.”

He never regretted his speech. Lejeune went on to work in many ways for the prevention or the end of legal abortion, lobbying doctors and scientists, giving conferences against the killing of the unborn and taking up prominent positions in pro-life groups such as “Laissez-les-vivre” (“Let them live”) and “Sos Futures Mères” that offered help to women in crisis pregnancies.

Lejeune also travelled to the US to testify in the Maryville lawsuit in favor of a woman who wanted to bear her deep-frozen embryos against the wishes of her husband who was divorcing her. His testimony was published in book form: The Concentration Can: When Does Human Life Begin.

Jérôme Lejeune would later in life become a dear and valued friend of Pope John-Paul II, who named him the first president of the Pontifical Academy for Life created in 1994. His presidency lasted only 33 days; Pr Lejeune died of cancer on April 3rd of that year. In 1997, during a visit to France on the occasion of the World Youth Day, John-Paul II insisted on going to pray at the tomb of the great scientist who was also a great believer and a convinced and coherent Catholic: in presence of Lejeune’s family, he travelled to the small cemetery of Chalô-Saint-Mars for what the French mainstream media called a “controversial visit.”

A documentary film about his life was produced in 2015.