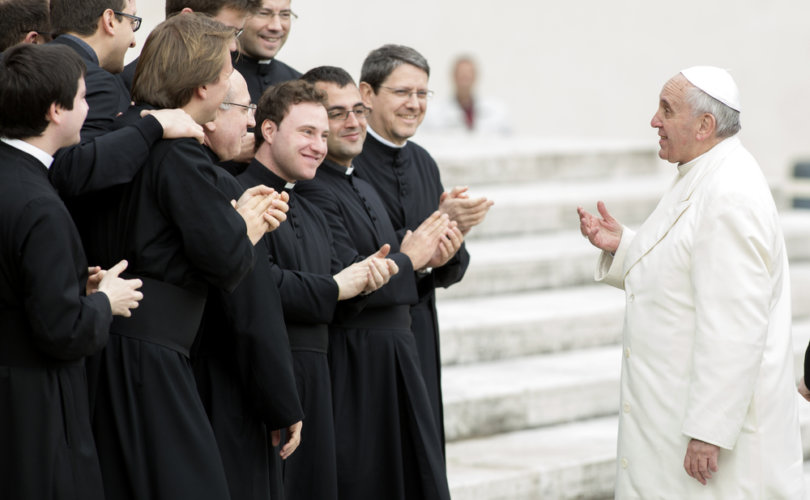 Pope Francis greets priests and seminarians during his weekly general audience in St Peter's square at the Vatican on February 26, 2014.Giulio Napolitano / Shutterstock.com

October 2, 2019 (LifeSiteNews) – Pope Francis has begun to eliminate restrictions on the activities of men who have been removed from the priestly state and allowed to marry, according to Religion Digital, a Spanish-language leftist news portal sometimes used by members of the Francis regime to announce new initiatives and respond to critics.

Moreover, the Vatican appears to be hinting that such people may be allowed to continue to carry out priestly functions in the future, even if they marry.

A trusted source close to the information has told LifeSite that the Vatican has also facilitated the process of obtaining dispensations for leaving the priesthood, and no longer places waiting periods or minimum ages on priests before they may receive such dispensations.

The same source tells LifeSite that the new rescripts are connected with the Amazon Synod agenda, which includes permitting the ordination of married men as priests.

Religion Digital describes the new approach as an “absolute and radical change in the procedure that priests have to follow when they hang up their garb and ask for a dispensation.”

Copy of new version of rescript – translated by LifeSite

According to a recent decree or “rescript” issued in Spanish by the Vatican in response to a request by a priest to be returned to the lay state, which was published by Religion Digital and has been translated into English by LifeSite, such priests may now remain in the communities that they served, where they must be “accepted,” even after marrying, and may even marry publicly in that same community.

In previous rescripts, laicized priests were prohibited from distributing Holy Communion or directing pastoral activities.  These restrictions are reversed in the current version of the rescript, which instead states that “the dispensed cleric will be able to exercise those ecclesiastical offices that do not require sacred Order, with the permission of the competent Bishop.”

Previous rescripts for laicizing priests stated that they must leave the communities they served and live in a place in which they were not known as having been ordained as a priest, and in addition, any marriage contracted by the laicized priest had to be “carried out with caution and without pomp and outward display.” Such rescripts also required laicized priests to carry out a penance through “some work of devotion or charity,” another requirement that has disappeared from the rescript.

However, the text of the new rescript hints that the prohibition on the priest continuing to function as a priest while married may be lifted in the future, stating that the dispensation “includes, inseparably, the dispensation from celibacy and, at the same time, the loss of the clerical state. These two elements can never be separated, because according to current practice they are part of a single procedure” (boldface added).

Religion Digital openly celebrates what it sees as a move towards a married priesthood, even including a drawing of a priest holding his child with the caption, “A priest with his little child in his arms would be a greater testimony of the love of God than all of the celibates in the world.”

The new rescript also relaxes prohibitions on laicized priests taking teaching positions. Although it still prohibits them from being involved in the formation of priests, it now allows them to teach theology and even to exercise leadership positions in the teaching of theology at the high school level. They may even teach theology at a Catholic university if permission is given by the Congregation for the Clergy. All such activities were prohibited to laicized priests in the past, mostly without exception.

A translation made in 2006 of the earlier rescript on dispensing a priest can be found here on pages 45-46.

A source with immediate knowledge of the situation tells LifeSite that the restrictions on such dispensations, which placed delays on priests asking to be laicized, have been lifted in recent years. Previously, priests had to be over 40 and had to wait five years from their initial request to receive laicization.  Now, it appears, priests can receive such dispensations virtually immediately, and with little to curtail their activities in the Church after they have left the priesthood.

“The prohibition of granting dispensation before the age of 40 or the need for the priest to abandon an irregular cohabitation before being eligible for the granting of a dispensation… all those rules are being turned into dust,” LifeSite’s source stated. Who added that now the priest is “viewed as a functionary,” with “a job one may peacefully abandon at any time.”

In leaving the priesthood, there is “an all around aura of normality,” the source added.

The Catholic Church teaches that priestly ordination places an “indelible mark” of the sacrament of Holy Orders on the recipient, which can never be nullified. When men are removed from the priestly state and allowed to marry, they technically remain priests, but may exercise their priestly faculties only under extraordinary circumstances, normally only to hear confessions of a person in danger of death.

The lifting of restrictions on laicized and married priests would seem to lend weight to concerns that the Amazon Synod, which begins on October 6, will begin to allow the ordination of married men, ostensibly to address the shortage of unmarried men willing to be ordained as priests.

The synod’s working document or “instrumentum laboris” states that “it is requested that, for the most remote areas of the region, the possibility of priestly ordination be studied for older people, preferably indigenous, respected and accepted by their community, even if they have an existing and stable family, in order to ensure availability of the Sacraments that accompany and sustain the Christian life.”

The Spanish original of the recent (July, 2019) rescript from Pope Francis can be found here.

LifeSite’s translation of the rescript can be found here.