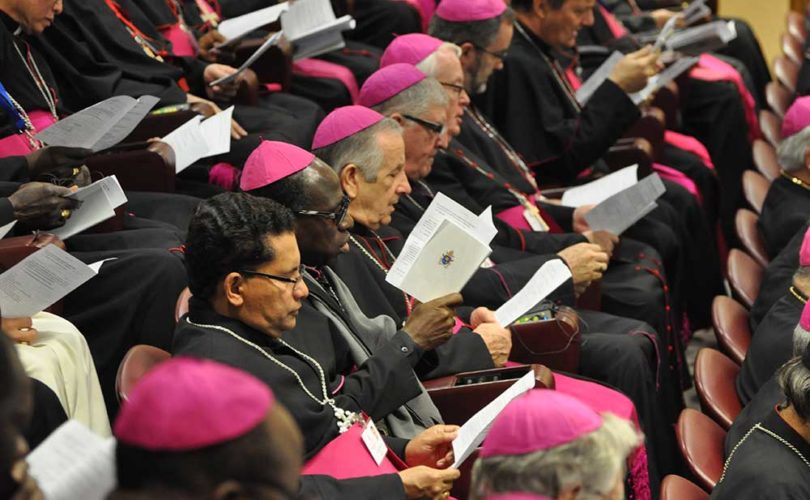 VATICAN CITY, June 16, 2017 (LifeSiteNews) – The Vatican is asking young people across the world, practicing Catholics and others, for their opinion on the Church and social issues in preparation for the upcoming 2018 Synod of Bishops on youth.

The public online survey geared for 16-30-year-olds released this week by the General Secretariat of the Synod of Bishops asks young people among other things whether it is of particular urgency today for the Catholic Church to focus on the environment.

The online survey asks young people about their lives, their social media use, how they view themselves, and who influences them. It also inquires into whether they trust the Church and other institutions, how much they appreciate certain aspects of the Church, and how they view God and Jesus.

The survey also asks young people about their ability and feelings toward migrating from their birthplace. Pope Francis referenced migration in a letter to young people when the synod topic was announced in January. The pontiff speaks frequently on the topics of immigration and the environment.

It asks as well for thoughts on the best age to first have a child, along with political and social activism.

A representative from one leading international family group noted several issues with the questionnaire and its methodology.

“The faith, the Church, and the family receive very little consideration compared to social media and ‘self-image,’” Voice of the Family’s Maria Madise told LifeSiteNews.

“Most of the answers are provided as multiple choice,” she said, “often excluding the most appropriate option.”

For example, in answer to the question “Why do you not have children?” a young person can choose from reasons like age, health, and living conditions, Madise pointed out, but not that because he or she is not married or is discerning a religious vocation.

When giving one’s state of life in the survey, she observed further, one of the options includes “separated or divorced, currently single” implying that marrying again is an option.

The Vatican typically seeks input before a synod from bishops’ conferences, dioceses, and religious orders. This survey for the youth synod is unique in that it queries the general public.

According to the synod preparatory document, the results of the online youth questionnaire, along with those from another collected from the Curia, episcopal conferences and other Church hierarchy, will be the basis for drafting the synod’s working document.

The Vatican had also issued a survey in advance of the Synods on the Family held in 2014 and 2015 seeking feedback on Church teaching regarding issues such as contraception, abortion, and marriage.

However, that questionnaire — directed at bishops, theologians and lay people — was distributed to Catholics via the bishops and their parishes.

Pro-life and family advocates were concerned at the time of its release about the possibility the survey may have been skewed to create a desired response that would pave the way to a departure from Church principles on marriage and family.

The October 2018 synod with the theme, “Young People, the Faith and the Discernment of Vocation,” follows the controversial Synods on the Family, which led to the release of Pope Francis’ apostolic exhortation Amoris Laetitia.

The Amoris Laetitia document remains controversial for its ambiguity allowing for tacit approval for Holy Communion for Catholics living in objectively sinful situations.

Varying bishops’ conferences across the world continue to issue official guidelines for Amoris Laetitia that permit access to the sacrament for divorced and remarried Catholics and others in “irregular unions,” citing the document in doing so. This access is granted via a pastoral process of accompaniment minus the Church’s edict calling for repentance and turning away from sin.

Madise expressed further concern over the online youth survey and implications for the corresponding synod.

“I am sure that the questionnaire is just a prologue to a whole volume of problems that characterise the forthcoming synod,” she said.

The youth synod survey results will “be of great use in the path of preparation for the synodal event and will form part of the wider-ranging consultation” the secretariat is conducting at all levels, the Vatican press release said.

The survey tells participants that its goal “is to provide you with the opportunity to communicate, express and recount who you are and what you want to say about yourself.”

The main website for the youth Synod is in Italian, but the survey can be taken in Italian, English, French, Spanish, and Portuguese

Deadline for the survey responses to the synod’s Secretary General is November 30.

Participants are asked to choose three answers among a choice of nine to the question, “What do you consider of particular urgency for the Catholic Church today?”

Peace and the environment and the Church’s fundamental principle of defending life are among the options that young people can say the Church should be focused.

The two selections are couched in the softer language of “particular attention to.”

Conversely, defense of life has more the extreme description for its proposed approach with the language “major promotion of.” Also framed in the stronger language of “major” application was in regard to whether the Church should focus on people living in consistency with professed Church values.

The choices for this question are:

Survey participants are also asked, “Who is Jesus for you?” Those selections include “a revolutionist” and “a wise man from the past” among other options recognizing him as the savior and the Son of God.

It’s not yet clear whether young people will be among the synod’s auditors.