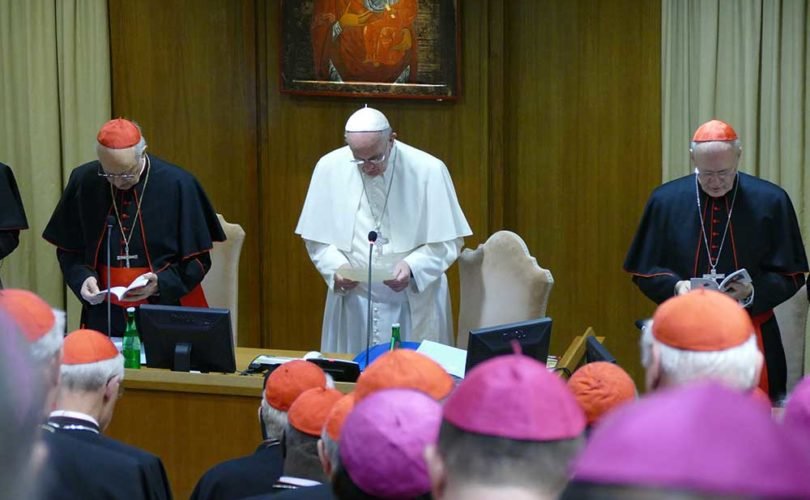 ROME, January 16, 2018 (LifeSiteNews) — The Vatican has released new details regarding the February summit with presidents of episcopal conferences across the world on clerical sexual abuse.

In a communiqué released today, the Vatican said the organizing committee for the February 21-24 summit on “The Protection of Minors in the Church” met in Rome on January 10.

The four-member papally appointed committee is composed of two cardinals and two experts in the field of sexual abuse, and includes: Cardinal Blasé Cupich of Chicago; Cardinal Oswald Gracias of Bombay, India: Archbishop Charles Scicluna of Malta; and Jesuit Father Hans Zollner, President of the Centre for the Protection of Minors at the Pontifical Gregorian University in Rome.

At the end of their work, Pope Francis met with committee members, who provided him with an update on preparations for the meeting.

According to the Jan. 16 communiqué, the February summit will include “plenary sessions, work groups, common moments of prayer with listening to testimonies, a penitential liturgy and a closing Eucharistic celebration.”

The statement added that “Pope Francis has ensured his presence for the entire duration of the meeting.” It also noted that the Pope has tasked former Vatican spokesman, Fr. Federico Lombardi, S.J., with moderating its plenary sessions.

The February Meeting on the protection of minors has a concrete purpose: the goal is that all of the Bishops clearly understand what they need to do to prevent and combat the worldwide problem of the sexual abuse of minors. Pope Francis knows that a global problem can only be resolved with a global response. The Pope wants it to be an assembly of Pastors, not an academic conference – a meeting characterized by prayer and discernment, a catechetical and working gathering.

It is fundamental for the Holy Father that when the Bishops who will come to Rome have returned to their countries and their dioceses, that they understand the laws to be applied and that they take the necessary steps to prevent abuse, to care for the victims, and to make sure that no case is covered up or buried.

Regarding the high expectations that have been created around the Meeting, it is important to emphasize that the Church is not at the beginning of the fight against abuse. The Meeting is a stage along the painful journey that the Church has unceasingly and decisively undertaken for over fifteen years.

Gisotti added that the Vatican will hold a press conference on February 18 to present the summit.

Concerning press coverage for the much-anticipated meeting, Gisotti told LifeSite that daily press briefings will be held with translations in several languages, and that the Vatican press office will be “opening the accreditation process in the coming days.”

Given that Theodore McCarrick is accused of molesting three boys — the youngest beginning at age 11 — and at least eight seminarians in dioceses he formerly led, the apparent absence in meeting preparations thus far of any reference to the sexual abuse of seminarians has led some to believe the Vatican and its organizing committee members are “avoiding the real problem.”

The February meeting is potentially a “masterpiece of hypocrisy” in the making, one well informed source told LifeSite, adding that its title — “The Protection of Minors in the Church” — is in itself “misleading.”

“The February meeting will make sense if the causes are denounced and measures taken to eliminate them,” the source said. According to some high-ranking clergy, chief among these causes is a “homosexual subculture within the hierarchy.”

Readers will remember that in the wake of the McCarrick scandal, and just months before his death, Bishop Morlino of Madison, Wisconsin, wrote a letter to the faithful of his diocese regarding “ongoing sexual abuse crisis in the Church.” In it, he said:

To be clear, in the specific situations at hand, we are talking about deviant sexual — almost exclusively homosexual — acts by clerics. We’re also talking about homosexual propositions and abuses against seminarians and young priests by powerful priests, bishops, and cardinals. We are talking about acts and actions which are not only in violation of the sacred promises made by some, in short, sacrilege, but also are in violation of the natural moral law for all. To call it anything else would be deceitful and would only ignore the problem further.

There has been a great deal of effort to keep separate acts which fall under the category of now-culturally-acceptable acts of homosexuality from the publicly-deplorable acts of pedophilia. That is to say, until recently the problems of the Church have been painted purely as problems of pedophilia — this despite clear evidence to the contrary. It is time to be honest that the problems are both and they are more. To fall into the trap of parsing problems according to what society might find acceptable or unacceptable is ignoring the fact that the Church has never held ANY of it to be acceptable — neither the abuse of children, nor any use of one’s sexuality outside of the marital relationship, nor the sin of sodomy, nor the entering of clerics into intimate sexual relationships at all, nor the abuse and coercion by those with authority. […]

While recent credible accusations of child sexual abuse by Archbishop McCarrick have brought a whole slew of issues to light, long-ignored was the issue of abuse of his power for the sake of homosexual gratification. It is time to admit that there is a homosexual subculture within the hierarchy of the Catholic Church that is wreaking great devastation in the vineyard of the Lord…

In Archbishop Carlo Maria Viganò’s third testimony, the former papal nuncio to the United States also lamented the hierarchy’s “silence” over what he called the “root cause” of ongoing clerical sex abuse. Archbishop Viganò wrote:

“This very grave crisis cannot be properly addressed and resolved unless and until we call things by their true names. This is a crisis due to the scourge of homosexuality, in its agents, in its motives, in its resistance to reform. It is no exaggeration to say that homosexuality has become a plague in the clergy, and it can only be eradicated with spiritual weapons. It is an enormous hypocrisy to condemn the abuse, claim to weep for the victims, and yet refuse to denounce the root cause of so much sexual abuse: homosexuality. It is hypocrisy to refuse to acknowledge that this scourge is due to a serious crisis in the spiritual life of the clergy and to fail to take the steps necessary to remedy it.

Unquestionably there exist philandering clergy, and unquestionably they too damage their own souls, the souls of those whom they corrupt, and the Church at large. But these violations of priestly celibacy are usually confined to the individuals immediately involved. Philandering clergy usually do not recruit other philanderers, nor work to promote them, nor cover-up their misdeeds — whereas the evidence for homosexual collusion, with its deep roots that are so difficult to eradicate, is overwhelming.

Some observers therefore believe the success of the February meeting will depend on episcopal conference presidents courageously raising these issues at the summit.

Following the release of today’s statements on the February meeting, LifeSite asked the director ad interim of the Holy See Press Office if the organizing committee plans to address the problem of the sexual abuse of seminarians at the summit (especially in light of the McCarrick case), but has received no response as of this report.