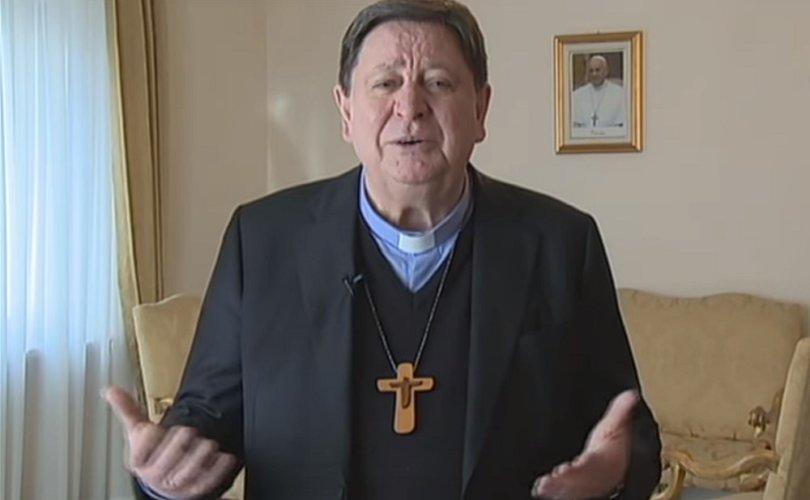 ASUNCION, Paraguay, July 19, 2019 (LifeSiteNews) — Cardinal João Braz de Aviz, prefect of the Congregation for Institutes of Consecrated Life and Societies of Apostolic Life, said it was Pope Francis who directed that bishops at the upcoming Amazon Synod discuss ordaining married men to the priesthood.

In a July 10 interview with Paraguay’s ABC Color daily, Cardinal Braz referred to the drop in priestly vocations in Europe and elsewhere, despite growth in Africa and Asia. Regarding the disparity, he said it was Pope Francis who came up with the idea of ordaining married men, “viri probati,” to work in under-served areas such as the Amazonian region. “Francis launched that idea to be verified and studied, not for the entire Church, which has its problems, but at the same time is not the great central problem.”

The central problem for the Church, said Braz, is the lack of witness. Affirming that consecrated persons must give witness to the faith, he said, “We have problems with sexuality, in dialogue, in individualism. We must change and enter into a relationship with values and an openness to the human.” Responding to theories that the sexual abuse crisis is due to celibacy, Braz said, “Celibacy does not cause disease. It is a free option that a person has in response to a call from the Lord. One can be celibate or not. Therefore, sexuality is another problem of maturity or immaturity, of interpreting the Gospel. So, it is a human problem that requires a normal education because often we were not concrete, illustrative, or heedful of problems; that must be corrected.”

As prefect of the Congregation for Institutes of Consecrated Life and Societies of Apostolic Life, Braz has authority over discipline over all male and female religious congregations and institutes. He was appointed by Pope Benedict XVI in 2011. He was sent by Pope Francis to attend a gathering of 90 religious congregations in Paraguay, which came near the fourth anniversary of the pope’s visit to the South American republic.

As for sexual abuse and cover-ups of clerical sexual abuse, he affirmed that Pope Francis seeks utter clarity. “If there is one case, we must clarify it. He said that the present moment requires aiding the victims and placing the perpetrators at the disposal of justice. This is also true, he said, regarding Vatican finances; the Vatican was found to have millions of euros that could not be accounted for. The structure of the Vatican must change, he said, and the pope must rebuild it.

Braz called for change among the various religious orders. He told Paraguayan daily Ultima Hora on July 14, “You have to look at what is fundamental and what is not. Many things of tradition, which are more of an ancient culture, are no longer useful.” As for the challenges arrayed against priests and religious, the Brazilian cardinal said that as prefect, he strives “for the transformation of formation.”

The formation of those in religious life, he said, should be “a life process” and a “path” that “requires a lot of attention, responsibility and the ability to forgive, to listen.” As for the transformation of religious life and the vocation crisis, Braz said, “I believe it is a problem of authenticity of life. It is also a problem that in many areas of society there is denial of God, not a denial in theory but in practice. So, we have to see now what is fundamental and what is not. Many things of tradition, many that are of the past culture, are no longer useful.”

“We have to change a lot,” he said, which includes the “way of praying, a way of dressing[.]” Citing areas where change is needed, Braz said, “We have ways of life linked to our founders that are not essential: a way of praying, a way of dressing, of giving more importance to certain things that are not so important and of neglecting others that are. All secondary things can fall but the special charisms of the founders cannot fall.”

The former archbishop of Brasilia said members of religious orders should address sexuality and the distinction between “power and authority.” The relationship between men and women, he said, should no longer be “defensive,” but “integrated, profound and complete.” Regarding celibacy, Braz said it remains fundamental and a pillar of consecrated life, as are the vows of poverty, chastity and obedience. “But these are not commandments, they are proposals, they are evangelical counsels,” he said. “Everyone must find out whether or not they are called on to do so. Sometimes people make mistakes and think they are being called, but that is not the case. Others do not accept, because they do not see it [celibacy] as a value; we must distinguish, discern and follow.”

Regarding their status in the Church, Braz said religious congregations should self-reflect. He said the priesthood is not “the most important thing,” but is “one vocation” among others. “In consecrated life, the priest should not occupy the first place, he should occupy the same place as other brothers and sisters,” he said. “This, for example, must change. The pope says that a distinction must be made between power and authority. Divine authority is good, not power.”

As for calls for further transparency and accountability in the Church regarding the continuing crisis of sexual abuse, he said Pope Francis wants transparency. He said, “The pope says that even if there were only one case of abuse in the Church, it should be revealed, because the consecrated figure of the priest is a figure that indicates a divine value.” He stressed that the media render “great good” when “they put all this into perspective.”

According to the consort of a disgraced Argentine bishop, it was to be expected that Pope Francis would push for married priests. Radical feminist Clelia Luro left her husband in the mid-1960s to join in an illicit union with Bishop Jeronimo Podesta. Podesta was an enemy of Argentina’s erstwhile military dictatorship and was suspended by the Vatican for his illicit union with Luro. He later founded the Latin American Federation of Married Priests and Their Wives, seeking thereafter to end priestly celibacy. Luro said that after Podesta’s death, the former cardinal Jorge Bergoglio kept in contact with her every week, even after he became pope. She also said that as cardinal, Bergoglio was often generous with help to married priests, offering loans and finding jobs for them.

Upon Francis’s election to the papacy, Luro was quoted as saying she was certain that Francis would propose the ordination of married men. Indeed, already in his 2010 book On Heaven and Earth, he wrote that he was in favor of maintaining celibacy “for the moment” but that it was something that could change. Luro’s prediction was borne out in 2017, when the pope told a German interviewer that the Church “must be open” to ordaining viri probati, “faithful” and “tested” married men.

Auxiliary bishop Athanasius Schneider of Kazakhstan released a document this week, stating that the pope has a “strict duty, as given to him by God” to adhere to the “apostolic inheritance of priestly celibacy” at the upcoming Amazon Synod. This tradition, he wrote, must be passed down “to his own successor and to the next generation.” Bishop Schneider continued, saying the pope “may not support in the slightest way — by silence or by an ambiguous conduct — the obviously Gnostic and naturalistic contents of parts of the Instrumentum laboris (working document), as well as the abolishment of the apostolic duty of priestly celibacy (which first would be regional, and then naturally, and step by step, then becomes universal).” Nevertheless, a key organizer of the synod and co-author of the working document, Bishop Erwin Kräutler of Austria, recently stated that the synod should at least discuss the ordination of female deacons.

Joining Bishop Schneider in expressing doubts about the Amazonia synod was Cardinal Raymond Burke. In June, Cardinal Burke told LifeSiteNews that “it is not honest” to assert that the synod will treat “the question of clerical celibacy for that region alone.” He said, “If [the synod] takes up the question, which I do not think it is right for it to do, it will be treating a discipline of the universal Church.” Referring to the breadth of the problem, Cardinal Burke said there is already a bishop in Germany who has announced that if the pope relaxes “the obligation of perfect continence for the clergy in the Amazon region, the bishops of Germany will ask for the same relaxation.”

Canon 277 of the Church’s legal code for the Latin rite reads: “Clerics are obliged to observe perfect and perpetual continence for the sake of the kingdom of heaven and are therefore bound to celibacy. Celibacy is a special gift of God by which sacred ministers can more easily remain close to Christ with an undivided heart, and can dedicate themselves more freely to the service of God and their neighbor.”