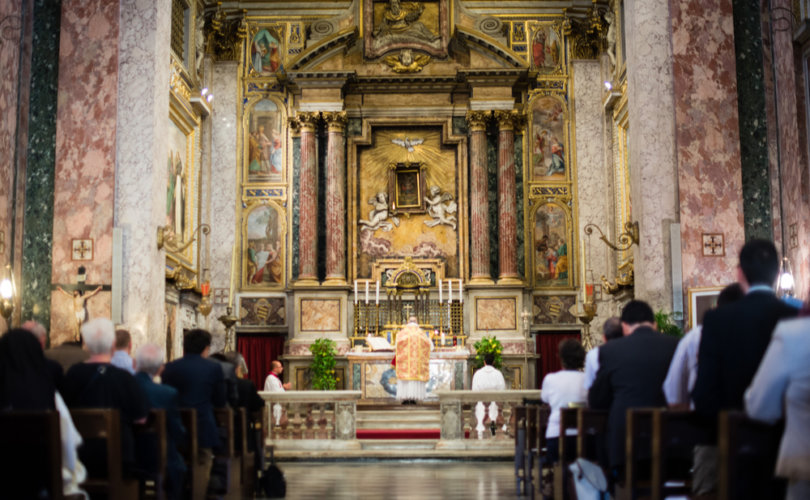 PITTSBURGH (LifeSiteNews) — A top Vatican correspondent yesterday released what she reported as “the hidden story behind Traditionis Custodes,” saying sources revealed that it was not in fact the input of the world’s bishops that shaped the Latin Mass-suppressing document as Pope Francis had claimed.

Diane Montagna shared in a report for The Remnant newspaper, first delivered at the Catholic Identity Conference on Sunday, that not only are the majority of the bishops’ survey responses from around the world at odds with Pope Francis’ portrayal of the Latin Mass as a divisive force, but that a second, previously unpublicized Congregation for the Doctrine of the Faith (CDF) report was commissioned to act as a kind of “second opinion,” separate from the bishops’ input on diocesan Latin Masses and their effects.

Reliable sources also shared with Montagna that a Vatican plenary session meeting was called in late January 2020, which reached a decision later implemented through Traditionis Custodes. The meeting concluded with the quote “Tradition is the living faith of the dead. Traditionalism is the dead faith of the living.”

“The key point,” Montagna said, is that “the conclusions of Traditionis Custodes are not the same” as those of the CDF’s main report, which was based on the assessment of bishops worldwide of Summorum Pontificum and the impact of the Latin Masses that re-emerged in its wake.

This revelation calls into question Pope Francis’ framing of Traditionis Custodes as satisfying the requests of bishops’ survey responses.

Pope Francis wrote in the letter to the world’s bishops accompanying Traditionis Custodes, “Responding to your requests, I take the firm decision to abrogate all the norms … permissions and customs that precede the present Motu proprio … ” He went on to claim that the permission by his predecessors [to freely] say the Latin Mass “was exploited to widen the gaps” and “encourage disagreements that injure the Church” and “expose her to the peril of division.”

The pope also stated in this letter that the questionnaire’s “responses reveal a situation that preoccupies and saddens me and persuades me of the need to intervene.”

The pope’s indications appear to depart not only from the bishops’ evaluations but from the claim of CDF adjunct secretary, Archbishop Augustine Di Noia, who told the National Catholic Reporter that the Pope’s “rationale” for retracting Latin Mass “permissions” in Traditionis Custodes “is not based on the results of the questionnaire but only occasioned by them.”

“As one source said,” Montagna wrote, “‘What they are really interested in doing is canceling the Old Mass, because they hate it.’”

She explained that among the responses from a third of the world’s bishops (excluding, for example, those from countries where Eastern liturgies are celebrated), more than half viewed the Traditional Mass favorably, and “more than 60 percent to two-thirds of bishops would have been on board with” keeping Summorum Pontificum, “perhaps with some slight modifications.”

In Montagna’s report, she shared a sampling of the bishops’ written survey responses, revealing many positive appraisals of the Latin Mass and its effects, some with caveats.

At least several bishops, in contrast to Pope Francis’ evaluation, believe the Latin Mass fosters unity and peace in the Church.

For example, one English bishop wrote, “The Extraordinary Form (EF), under the prudent leadership of the Ordinary, has allowed more Catholics to be able to pray according to their desire, and has dispelled the conflicts of before. Its quiet presence should not be disturbed.”

In a section on “Proposals and/or perspectives for the future,” one Italian bishop said regarding Summorum Pontificum, “I do not believe that it is appropriate to abrogate it or limit it with new norms, so as not to create contrasts and further conflicts, leading to the feeling of a lack of respect for minorities and their sensitivities.”

A U.S. bishop wrote, “I fear that without the extraordinary form, many souls would leave the Church.”

Interestingly, one English bishop wrote, “In a negative sense, [the EF] can foster a feeling of superiority among the faithful, but since this rite is more widely used, that feeling has diminished.”

Also included in a section on “negative assessments about the attitude of certain faithful,” an Italian bishop said, “The aspects [of the EF] in themselves are only positive: it is a great gift for all to be able to know and attend the celebration in the extraordinary form. The negative aspects are only present to the extent that these celebrations are celebrated and/or attended by unbalanced or ideologized people.”

Montagna shared numerous other responses of the bishops, mostly positive, in her report.

Theologian and author Dr. Peter Kwasniewski shared yesterday that a German friend of his “confirmed Diane Montagna’s bombshell revelations on the internal CDF report” on the bishops’ responses, which he noted “came to the opposite conclusion to the one the Pope said it did.”

Kwasniewski has noted, like Montagna, that this internal report “in fact harmonizes with the behavior of a majority of bishops around the world, who have chosen either to sidestep the motu proprio or to implement it only partially.”

Why is it, as Montagna noted, that Traditionis Custodes “was not consistent with what the main report recommended or revealed”? While we do not know with certainty, Montagna has unveiled details of a Vatican meeting, and a second CDF report, that raise new questions about Traditionis Custodes.

According to Montagna, the conclusion of a January 29, 2020 plenary session meeting (held months before the bishops’ questionnaire was issued) aligns with certain instructions of Traditionis Custodes. Even more revealing, her sources have shared that some prelates expressed aversion to “traditionalism” and traditional groups during the meeting.

Montagna said the meeting “was held to discuss the fourth section of the Congregation for the Doctrine of the Faith, what was formerly known as the Pontifical Ecclesia Dei Commission.” In place of the Prefect of the CDF Cardinal Luis Ladaria, SJ, who was absent due to illness, the CDF secretary, Archbishop Giacomo Morandi, chaired the meeting.

“According to reliable sources, Cardinal Parolin, Cardinal Ouellet and Cardinal Versaldi were leading the discussion and piloting it in a definite direction,” Montagna said.

To give “a taste of what was said,” Montagna shared that one cardinal had “expressed some alarm that close to 13,000 young people had registered for the Chartres pilgrimage,” during which the Latin Mass is celebrated, and saying “many of these young people have ‘psychological and sociological problems.’”

“Another cardinal said that from the little experience he had, ‘these groups don’t accept change’ and they ‘participate without concelebrating.’ The CDF should therefore ask for a ‘concrete sign of communion, of the recognition of the validity of the Mass of Paul VI,’ he insisted, adding that ‘we can’t go on like this,’” shared Montagna.

“An Italian archbishop said he agreed the CDF shouldn’t resume discussions with the SSPX, because ‘there’s no dialogue with the deaf.’ He lamented that Pope Francis had given concessions to the SSPX in the Year of Mercy but was getting nothing in return,” he continued.

There was, reportedly, “only one conclusion” of the meeting that was shared in the “final proposals offered to the Holy Father,” Montagna said.

She observed regarding Traditionis Custodes, “It seems the ball had already been set rolling at the plenary session in late January 2020.”

Yet another revelation raises further questions about the real origins of Traditionis Custodes: A second, “parallel report” was commissioned by the CDF even as the main report was being prepared, according to Montagna’s reliable sources.

“The Congregation allegedly had to be sure that the main report didn’t just come to the usual conclusions, e.g. that the traditional Mass is a positive element in the life of the Church, etc.,” Montagna wrote. “The second report was therefore billed as a sort of second opinion, a check on the main report.”

According to Montagna, this second report was “commissioned around November 2020” and “handed in before Christmas.” She pointed out that at this time “the CDF was still receiving and processing responses to the survey, and did so until January 2021,” making that the extent to which this report took those results into account was necessarily limited, especially considering the amount of material they had to review.

Advice for bishops, priests, and laity

Montagna concluded with thoughtful advice to the clergy and laity on how to respond to Traditionis Custodes: