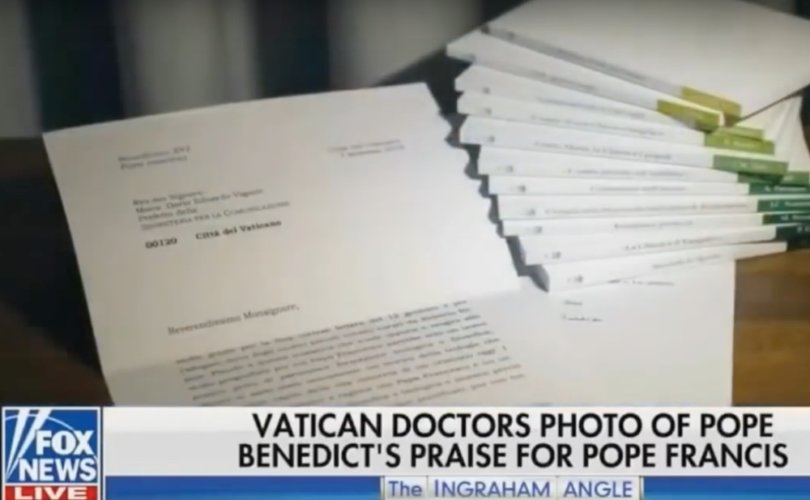 VATICAN, March 17, 2018 (LifeSiteNews) —  The Vatican’s Secretariat for Communications on Saturday issued a statement on the Viganò-Benedict ‘Lettergate’ controversy, confirming reports that a second significant paragraph of Pope Emeritus Benedict XVI’s letter to the head of Vatican communications, Msgr. Dario Viganò, was left out during the presentation of a new 11-booklet series on the theology of Pope Francis.

The missing paragraph reveals Benedict’s “surprise” that a German theologian known for “spearheading anti-papal efforts” against himself and Pope John Paul II, especially “on issues of moral theology,” was featured as a contributor in the 11-volume series titled “The Theology of Pope Francis.”

Here below is the Vatican Secretariat for Communications press release and the full text of Benedict XVI’s letter (the translation is my own).

During the presentation of the series The Theology of Pope Francis, published by Libreria Editrice Vaticana, which took place on March 12, a letter by the Pope Emeritus Benedict XVI was publicized.

Much controversy has followed regarding an alleged censored manipulation of the photograph that was distributed as a photographic handout.

Everything in the confidential letter that was considered appropriate and pertinent to the initiative, and in particular all that the Pope Emeritus stated about the philosophical and theological formation of the current Pontiff and the interior continuity between the two pontificates, was read out, leaving aside several notes regarding contributors to the series.

The choice was motivated by confidentiality and not by any intention to censor it. In order to dispel any doubts, it was therefore decided to make the letter public in its entirety.

Prefect of the Secretariat for Communications

Thank you for your kind letter of January 12 and for the attached gift of the eleven small volumes edited by Roberto Repole.

I applaud this initiative which is intended to oppose and react to the foolish prejudice that  Pope Francis is only a practical man without any special theological or philosophical training, while I have been only a theorist of theology with little understanding of the concrete life of a Christian today.

The small volumes demonstrate, rightly, that Pope Francis is a man of deep philosophical and theological formation, and they therefore help to show the interior continuity between the two pontificates, although with all the differences of style and temperament.

However, I do not feel I can write a brief and dense theological page on them, because throughout my entire life it has always been clear that I would write and express myself only on books that I had also truly read. Unfortunately, also for physical reasons alone, I am unable to read the eleven little volumes in the near future, all the more so other  commitments that I have already undertaken await me.

Only as a footnote, I wish to note my surprise over the fact that Professor Hünermann, who during my pontificate distinguished himself for spearheading anti-papal efforts, is also featured among the authors. He was a key figure in the release of the “Kölner Erklärung,” which in relation to the encyclical Veritatis Splendor, virulently attacked the Pope’s magisterial authority, especially on issues of moral theology. Additionally, the “Europäische Theologengesellschaft,” which he founded, was initially conceived by him as an organization in opposition to the papal magisterium. Later, the ecclesial sense of many theologians blocked this orientation, making that organization a normal instrument of encounter among theologians.

I am sure you will understand my refusal and I offer you cordial greetings.

The full letter of Benedict XVI in the original Italian, released by the Vatican today: