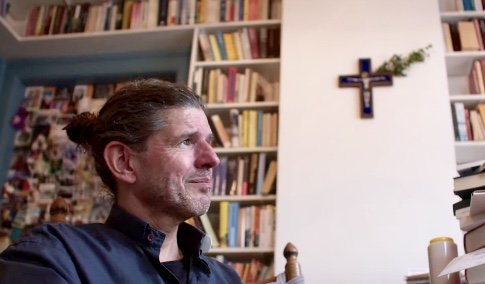 December 24, 2019 (LifeSiteNews) – The Congregation for the Clergy, the body of the Roman Curia responsible for overseeing matters regarding priests not in a religious order, has asked the bishops of Haarlem-Amsterdam to retract two decrees by which they suspended and then fired a parish priest after he publicly proclaimed his homosexuality and dissolute lifestyle.

This took place at the end of “Gaudete” Sunday Mass in April on the 25th anniversary of Pierre Valkering’s ordination. The long-haired priest, wearing pink vestments proper to the fourth Sunday in Lent, told his story and presented his new book, Undressed, not naked, to assembled parishioners and friends who came to celebrate his Jubilee.

The priest was sanctioned because he had not remained faithful to his promise of “celibacy” while having multiple homosexual relationships. Valkering, by his own account, disregarded the requirements of chastity and continence for a Catholic priest and for several years was visibly militant in pushing for a change of attitude by the Church toward homosexuality.

Bishop Jozef Punt of Haarlem-Amsterdam complained that the diocese had been “publicly pushed into a corner” while trying to help Valkering explore the situation and “to reflect and to get help” in observing sexual continence. Several statements were made insisting that Valkering was not being suspended or fired because of his “sexual orientation.”

According to the ruling by the Congregation for the Clergy after Valkering’s appeal of the sanctions, procedural errors affecting the two decrees against him will most probably lead to their annulment when they are assessed by the ecclesiastical tribunal of the Signatura Apostolica.

But contrary to what has been suggested in media reports, Valkering was not truly vindicated by the Congregation of the Clergy after his appeal against the two decrees. The Dutch priest, who first went public with the news on a radio show on December 12, told the Evangelical station EO program “Dit is de Dag” that his dismissal was found “unjust” because his offense was not clearly defined. He added that, according to the curial institution, proof was insufficient and he had not obtained his due rights of response.

Valkering did state, however, that he had not been reinstated as parish priest of the Our Lady Queen of Peace parish in Amsterdam, known as the “Vredeskerk” (“Peace Church”). He said Rome advised Bishop Punt and his coadjutor, Bishop Johannes Hendriks, to advise him to step down voluntarily. Valkering added that he had indeed been asked to make a decision “before Christmas.” At the time of writing, Valkering has not made his decision public.

The Roman ruling itself is not publicly available.

In a statement, the diocese of Haarlem-Amsterdam clarified that regarding the affair itself, “Rome has on the contrary approved the measures taken by the Bishop, even finding them too mild.”

Bishops Punt and Hendriks made clear that they had agreed to retract the disputed decrees because of their procedural weaknesses. They suggested that Valkering should tender his resignation in order to avoid a new dismissal procedure.

An informed source in Rome told LifeSite that a new procedure respecting the procedural norms could, in theory, be initiated by the diocesan authorities of Haarlem-Amsterdam immediately after the ruling by the Congregation for the Clergy.

The Congregation could also open new proceedings itself, he commented, adding that such a move would not be a habitual one.

According to the Dutch bishops, the Congregation considered it “problematic” that Valkering should “resume pastoral responsibility for the Peace Parish.” “It asks the bishop to consider first asking the priest once again to retire from this parish, so as not to have to initiate a new dismissal procedure. The priest is considering this point,” said the statement published December 13.

In another move advised by the Congregation for the Clergy, Bishop Punt has lifted Valkering’s suspension for six months in order to replace it by a lengthier suspension. The first suspension was decreed shortly after Valkering went public about his homosexuality, his long-lasting relationship with a male “friend,” his former frequent visits to back-rooms and saunas to find partners, and his ongoing addiction to pornography.

In their December 13 statement, the bishops of Haarlem-Amsterdam said they would shortly issue the new decree. Its contents were made public at the same time. It will lengthen the suspension to one year.

However, under the new terms that do not appear to reflect the Congregation's alleged statement that the sanctions were “too mild,” the bishops have decided that Valkering is to be allowed to celebrate Mass privately, or to concelebrate should he follow the bishops’ advice to observe a period of reflection in a religious congregation.

To date, Valkering has refused to follow this advice and is still residing in the rectory of the Vredeskerk. Being merely suspended, he also continues to receive his monthly allowance, he said during a TV interview.

The new decree will also allow Valkering to hear confessions in case of emergency. While the length of the suspension was doubled, Bishop Punt will have an opportunity to make an intermediate evaluation in order to shorten the suspension if he deems fit. He may decide to allow Valkering to make a “(pastoral) relaunch as a serving priest within the diocese,” the statement added.

A condition was added by the Congregation for the Clergy that ordered Valkering to refrain henceforward from publicity and from preaching.

All of this makes clear that the Congregation for the Clergy did not rule “in favor” of Valkering. But a reinstatement of the disgraced priest in another parish is not completely off the cards.

However, all of this does not take away the fact that he provoked a grave scandal among the souls entrusted to him in his parish and that he has not stopped campaigning for the “rights” of homosexuals to live out their sexuality and to talk about it openly.

Valkering has also made clear that he is in line with French sociologist and journalist Frédéric Martel’s thesis in his recent book, Sodoma, Inside the Vatican, alleging that a large proportion of priests, bishops and cardinals in the Catholic Church are closeted homosexuals who are all the more aggressive against homosexuality that they are personally. Valkering said that as a student in theology, he had been surprised in his youth by the number of homosexual fellow-students in his faculty, “many” of whom would also be ordained priests, he asserted.

Since the eviction from his role as parish priest of the Vredeskerk, Valkering has given several talks and interviews.

Two weeks ago, Valkering told Intermediair,  a Dutch website on work-related themes: “One should always see a life according to the person and within context. I am an exponent of the Netherlands and the Church of these last 50 years. I had a traumatic time as a teenager that spilled over into my years as a student. Then came freedom, in the form I gave to my life. That wasn't easy. Tout comprendre c’est tout pardonner. (To understand everything is to forgive everything.) When you really fathom a person's life, then you can look at yourself and at each other with mildness. To my mind, that mercy is the aim of Christianity.”

In July, Valkering gave an interview to 1V station pleading for tolerance for homosexuality. “Valkering wants the Church openly to recognize and approve of homosexuality,” commented journalist Willem Jan Bloem during the video, in which short shots of homosexual nightclubs in the 1980s are shown.

During the talk, Valkering recalled how kindly Pope Francis received from his hands a book he compiled about a gay-friendly Dutch priest who ministered to homosexuals in the 1990s, Jan van Kilsdonk. Valkering had said previously that he considered himself to be “on a mission” from Pope Francis to reach out to the gay community.

Last August, Valkering was invited to give a Bible reading at the Amsterdam “Pride service” in a Protestant church on the famed Keizersgracht the day after the local “Gay Pride.” The “Rainbow service,” as it is called, included an obscene joke by a woman protestant “cleric.”

In an interview in the church garden before the event, Valkering said how happy he was with the ongoing support he was receiving from his parishioners, adding that he would keep going.

Since the ruling of the Congregation for the Clergy, Valkering has hinted that he is reluctant to resign from his parish “because I still believe in God and in the church, in spite of everything. I long for the church to regain its wings, for people to be happy with it,” he said.