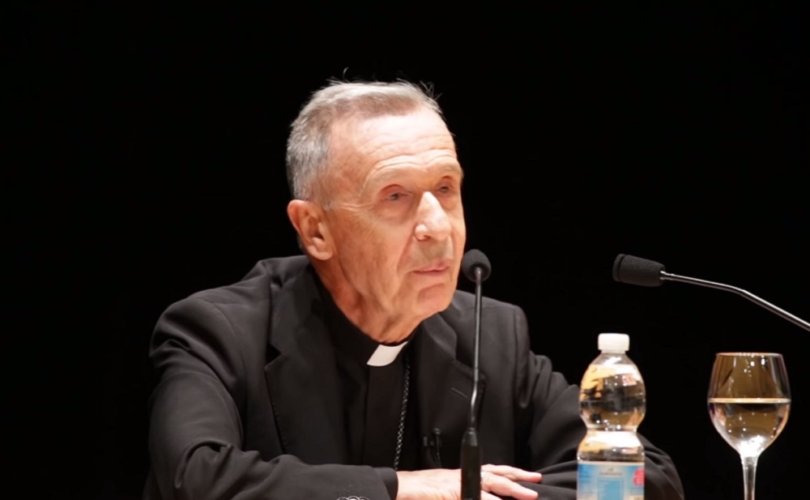 Cdl. Luis Ladaria Ferrer, prefect of the Congregation for the Doctrine of the Faith.Diócesis de Córdoba / YouTube

VATICAN CITY, September 22, 2020 (LifeSiteNews) ― The Congregation for the Doctrine of the Faith has ruled that pastors may not accompany sick people through assisted suicides.

The Congregation for the Doctrine of the Faith (CDF) is the Vatican dicastery most directly responsible for protecting the integrity of the Catholic faith. This morning, it released a letter titled “Samaritanus bonus: On the Care of Persons in the Critical and Terminal Phases of Life” which repeats perennial Catholic teaching on the sanctity of human life and the dignity of all human persons from conception until natural death. The document was signed by the CDF’s prefect, Cardinal Luis Ladaria Ferrer.

“Euthanasia … is an intrinsically evil act in very situation and or circumstance,” wrote Cardinal Ladaria.

“Any formal or immediate material cooperation in such an act is a grave sin against human life.”

Euthanasia, which includes assisted suicide, is so contrary to the love and hope the Gospel conveys to mankind that Ladaria has underscored that clerics must not encourage the evil in any way or give the sacraments to a person who intends to be killed by direct medical intervention.

“The pastoral accompaniment of those who expressly ask for euthanasia or assisted suicide today presents a singular moment when a reaffirmation of the teaching of the Church is necessary,” he stated.

“With respect to the Sacrament of Penance and Reconciliation, the confessor must be assured of the presence of the true contrition necessary for the validity of absolution which consists in “sorrow of mind and a detestation for sin committed, with the purpose of not sinning for the future [Council of Trent],” he continued.

“In this situation, we find ourselves before a person who, whatever their subjective dispositions may be, has decided upon a gravely immoral act and willingly persists in this decision.”

“Such a penitent can receive these sacraments only when the minister discerns his or her readiness to take concrete steps that indicate he or she has modified their decision in this regard,” the letter continues.

“Thus a person who may be registered in an association to receive euthanasia or assisted suicide must manifest the intention of cancelling such a registration before receiving the sacraments.”

If it is too late, and the person is already unconscious, the priest could nevertheless administer the sacraments if there was some sign beforehand that he had repented.

The document comes about nine months after Archbishop Vincenzo Paglia, President of the Pontifical Academy for Life, controversially asserted that a priest may legitimately remain at the bedside of someone undergoing assisted suicide in order to “hold their hand” and “accompany” them.

Ladaria, who stressed in the first 18 pages of the document the necessity of loving, accompanying, and respecting all sick persons, explained that withholding the sacraments from someone intent on assisted suicide is not a rejection but a spiritual “medicinal act.”

The refusal of absolution “must be accompanied by a willingness to listen and to help, together with a deeper explanation of the nature of the sacrament, in order to provide the opportunity to desire and choose the sacrament up to the last moment,” the letter states.

“The Church is careful to look deeply for adequate signs of conversion, so that the faithful can reasonably ask for the reception of the sacraments. To delay absolution is a medicinal act of the Church, intended not to condemn, but to lead the sinner to conversion.”

Ladaria encouraged pastors to remain close to the suicide-minded person “for this nearness is an invitation to conversion, especially when euthanasia, requested or accepted, will not take place immediately or imminently.”

“Here it remains possible to accompany the person whose hope may be revived and whose erroneous decision may be modified, thus opening the way to admission to the sacraments.”

However, no one who is ministering to this person may show approval for his “unlawful” killing in any way. Ladaria stipulated in particular that “those who spiritually assist these persons should avoid any gesture, such as remaining until the euthanasia is performed, that could be interpreted as approval of this action.”

“Such a presence could imply complicity in the act.”

Earlier in the document, Ladaria explored and deplored reasons why people might be tempted by assisted suicide. He condemned the utilitarian attitude towards the value of life and a contemporary coldness toward sick and suffering people. He stressed that good palliative care “reduces considerably the number of persons who request euthanasia.”

To thank the Congregation of the Doctrine of Faith for its defense of human life against euthanasia, please contact: