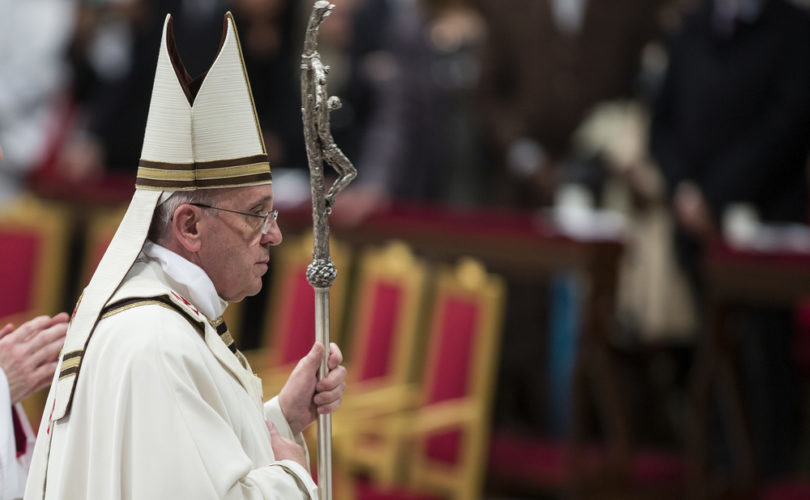 ROME, July 26, 2017 (LifeSiteNews) – Sources inside the Vatican suggest that Pope Francis aims to end Pope Benedict XVI’s universal permission for priests to say the Traditional Latin Mass (TLM), also known as the Extraordinary Form of the Mass. While the course of action would be in tune with Pope Francis’ repeatedly expressed disdain for the TLM especially among young people, there has been no open discussion of it to date.

Sources in Rome told LifeSite last week that liberal prelates inside the Congregation for the Doctrine of Faith were overheard discussing a plan ascribed to the Pope to do away with Pope Benedict’s famous document that gave priests freedom to offer the ancient rite of the Mass.

Catholic traditionalists have just celebrated the tenth anniversary of the document, Summorum Pontificum. Pope Benedict XVI issued it in 2007, giving all Latin Rite priests permission to offer the TLM without seeking permission of their bishops, undoing a restriction placed on priests after the Second Vatican Council.

The motu proprio outraged liberal bishops as it stripped them of the power to forbid the TLM, as many did. Previously priests needed their bishop’s permission to offer the TLM.

Additionally, Summorum Pontificum stated that wherever a group of the faithful request the TLM, the parish priests should willingly agree to their request.

The overheard plans are nearly identical to comments from an important Italian liturgist in an interview published by France’s La Croix earlier this month. Andrea Grillo a lay professor at the Pontifical Athenaeum of St Anselmo in Rome, billed by La Croix as “close to the Pope,” is intimately familiar Summorum Pontificum. Grillo in fact published a book against Summorum Pontificum before the papal document was even released.

Grillo told La Croix that Francis is considering abolishing Summorum Pontificum. According to Grillo, once the Vatican erects the Society of Saint Pius X as a Personal Prelature, the Roman Rite will be preserved only within this structure. “But [Francis] will not do this as long as Benedict XVI is alive.”

Moreover, LifeSite’s source suggested that the plan may explain a May 20, 2017 letter by the recently ousted Prefect of the Congregation for the Doctrine of Faith, Cardinal Gerhard Müller. Even though Cardinal Müller wanted the SSPX fully reconciled to help fight modernists in the Church, the May 20 letter seemed to scuttle an agreement between Pope Francis and the SSPX which would see them get a personal prelature. The letter includes provisions long known to be completely unacceptable to the SSPX, thus nullifying an understanding SSPX leader Bishop Bernard Fellay believed was imminent.

The LifeSite source suggested that the May 20 letter by Muller perhaps was written because he knows what Francis was up to and wanted to avoid the plan to bury Summorum Pontificum with Pope Benedict. “It’s directed not so much against Fellay but against the agreement,” said the source. “Pope Francis was very angry that document came out from Cardinal Muller and some say that’s why he made the decision to dismiss him.”

Cardinal Burke responds to Pope Francis: The Latin Mass ‘is no exception’