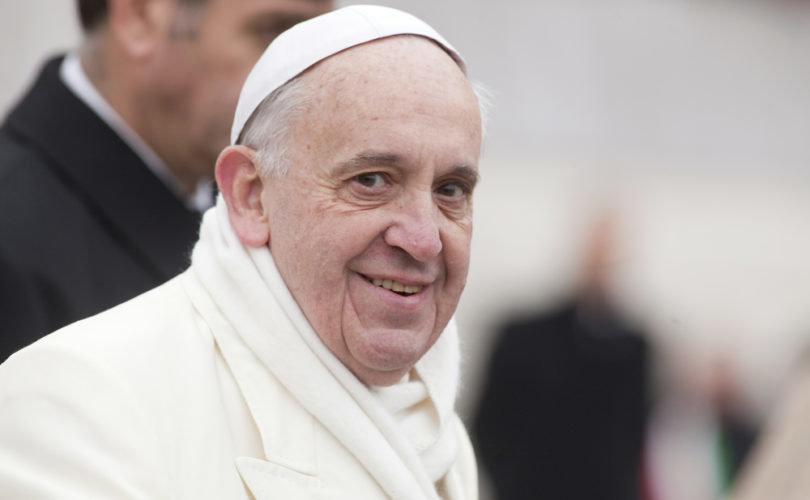 VATICAN CITY, August 28, 2018, (LifeSiteNews) – The Vatican has deleted from its official records Pope Francis’ recent advice that parents should get psychiatric help for children who demonstrate homosexual tendencies.

The Pope’s remark had stirred up a hornet’s nest of controversy and indignation within the LGBT world––and perhaps within some quarters of the Vatican itself––resulting in the pontiff’s words being altered.

“The Vatican later removed his phrase from its official account, saying he had not meant to suggest that homosexuality was a mental illness,” according to Agence France Presse (AFP).

A Vatican spokeswoman told AFP the Pope’s words had been scrubbed while trying to not “change the thoughts of the Holy Father.”

“When the Pope referred to ‘psychiatry,’ it is clear that he was doing it to highlight an example of ‘things that can be done.’ But with that word he didn’t mean to say that it (homosexuality) was a ‘mental illness’,” she said.

The Vatican’s action, whether intended to do so or not, appears to signal that the Vatican agrees with the LGBT world’s protestation that homosexuality is not a mental illness which can benefit from psychiatric and psychological help.

While aboard a chartered Aer Lingus plane on the weekend returning him to Rome after the World Meeting of Families (WMOF) in Dublin, the Pope was asked by a journalist what counsel he could offer to parents “whose child is gay?”

“I would say first of all pray, not to condemn, to dialogue, to understand, to give space to the son or the daughter,” he said.

“When it [homosexuality] shows itself from childhood, there is a lot that can be done through psychiatry, to see how things are. It is something else if it shows itself after 20 years,” he added.

The Vatican scrubbed version now reads: “It is one thing when it [homosexuality] shows up in childhood when there are so many things that one can do to see how the matter stands; it is another when it is [sic] shows up at twenty years of age or so.”

Much of the LGBT world and the media initially cheered the Pope’s response, including Fr. James Martin, SJ, who after promoting the normalization and integration of homosexuality within the Church at his WMOF presentation, expressed his delight at the Pope’s advice, tweeting the entire message out in several tweets:

Breaking: Pope Francis answers: What would you say to a parent who has a gay child? “You are my son or daughter, as you are.” 1/

Yet the Pope’s recommendation that parents seek psychiatric help for youngsters who display signs of homosexuality at a young age did not sit well.

A member of the German Lesbian and Gay Association (LSVD), Henny Engels, condemned that portion of the Pope’s remarks as “deeply worrying and wrong,”  according to a report in a German Catholic media source, katholisch.de.

Engels asserted that statements like the Pope’s cause hatred and “fuel homophobia.”

“Homosexuality is not an illness and thus does not need therapy,” he added.

The Catholic Church teaches that the homosexual inclination is an “objective disorder” that tends to “sin.”

“Although the particular inclination of the homosexual person is not a sin, it is a more or less strong tendency ordered toward an intrinsic moral evil; and thus the inclination itself must be seen as an objective disorder,” states a 1986 letter from the Congregation for the Doctrine of the Faith (headed by then Cardinal Ratzinger) to bishops on the pastoral care of homosexual persons.

“[S]pecial concern and pastoral attention should be directed toward those who have this condition, lest they be led to believe that the living out of this orientation in homosexual activity is a morally acceptable option. It is not,” the letter adds.

The 1994 Catechism of the Catholic Church confirmed this teaching, stating: “The number of men and women who have deep-seated homosexual tendencies is not negligible. This inclination, which is objectively disordered, constitutes for most of them a trial.”