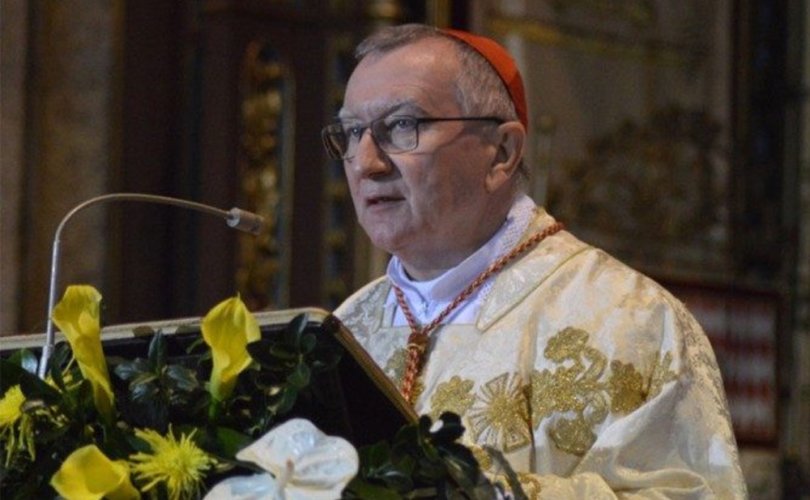 If there was a reason for it, says Cardinal Pietro Parolin, the Vatican’s Secretary of State, it followed “terrible logic.”

Parolin’s comments join others made by Church prelates in support of Tom Evans and Kate James as Alder Hey Children’s Hospital kept their child against their will.

Alfie died overnight Saturday after his parents fought for months to take him elsewhere, even home.

His controversial case involving parental rights and care for the seriously ill has garnered international attention and united Catholics and others worldwide in support of Alfie, his parents and the sanctity of human life.

At least one report now raises questions about his death.

Parolin’s comments published in an interview Monday also run counter to that of other Church leaders who supported the hospital in its actions, including Liverpool Archbishop Malcolm McMahon and the Bishops of England and Wales.

McMahon had said he was “grateful for the medical and chaplaincy care” that Alfie was receiving. The Catholic Bishops Conference of England and Wales had issued a statement saying the public criticism of Alder Hey’s care for Alfie was “unfounded.”

“It caused me an enormous sadness,” Parolin said, “in the face of a willingness, so openly expressed, so many times, and with such great commitment of means – the doctors of our Children's Hospital Jesus went three times to Liverpool – there was a refusal to allow Alfie to be taken to Italy.”

“That is incomprehensible,” the cardinal told La Stampa’s Andrea Tornielli. “This was what struck me the most, it upset me. I cannot understand why.”

“Or perhaps there is a reason, and it follows a terrible logic,” Parolin added. “The Pope and the Holy See have tried to do everything possible to help the family and to ensure that the child is accompanied during the course of his illness, despite the unfortunate prognosis.”

Archbishop Luigi Negri made striking remarks on Alfie’s plight to La Nuova Bussola Quotidiana in the wake of the child’s passing.

The comments by the archbishop emeritus of Ferrara-Comacchio, Italy, were shared in a tweet from the National Catholic Register’s Ed Pentin, and the video also posted by Religión en Libertad.

Referencing Alfie’s case having drawn people together in defense of his life, Negri praised Alfie as the leader of a people “that will never trade good for bad” or “consider vice a virtue.”

Calling Alfie a “great little fighter,” Negri said the child deserved the Honors of War – the privileges afforded an army in defeat in recognition of its valor.

“In ancient times Honours of War were a deep-rooted custom,” the archbishop explained. “Tribute was also paid to those who had lost, but had distinguished themselves in battle for their great virtue and courage and because they had fought for something they believed in.”

“Alfie was a true leader, and this was possible thanks to the wisdom of his father,” he said. “Alfie was the leader of a people that will never accept – Never – to trade good for bad, consider vice a virtue, that will never accept that desires, especially the most corrupt, turn into rights in this society without God and without love for human life.”

“Alfie led us through everything,” continued Negri, “he walked in front of us, and it was thanks to him that, following Saint John Paul II’s words, we found the strength to stand up and speak out loud against this all-engulfing inhumanity. Honour to you Alfie, you deserve the Honours of War.”

Alfie’s family has provided an address to send condolences. Click HERE for details.