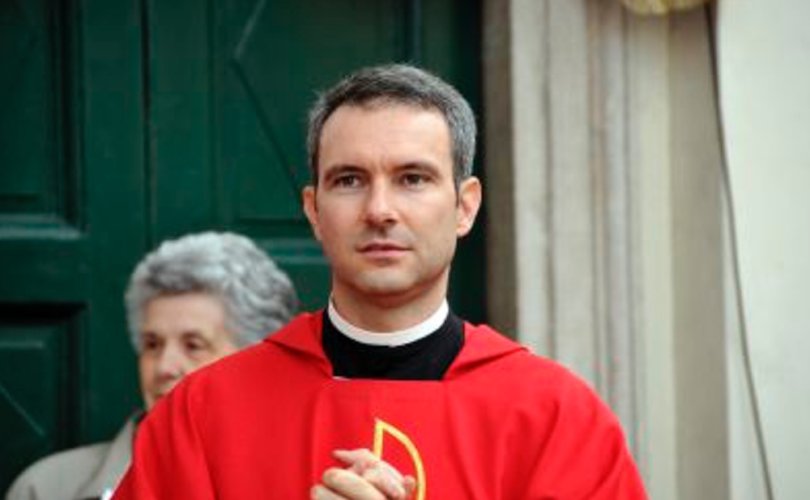 June 27, 2018 (LifeSiteNews.com) – A priest and diplomat who served at the Vatican’s embassy in Washington, D.C., has been convicted of possession and distribution of child pornography, according to the Holy See.

The Vatican announced that Msgr. Carlo Alberto Capella, 51, a career diplomat for the Holy See, has been sentenced to five years in confinement and a total fine of 5,000 Euros (5,830 USD), including 4,000 as a penalty and 1,000 Euros in court costs. He will reportedly serve the time in a detention cell maintained by the police of Vatican City State, the Gendarmerie.

The Vatican City State tribunal declared Capella specifically guilty of “publishing, transmitting, offering, and holding” child pornography in the form of cartoons, photos, and videos, which he had downloaded on his phone.

According to Tribunal President Giuseppe Dalla Torre, Capella continued to view the images on his phone even after returning to Vatican City following his recall from the United States.

The prosecutor in the case, Gian Piero Milano, reportedly asked for more prison time and a higher fine because of the large number of images and videos found on Capella’s cell phone – 40 total – according to USA Today.

Under a Vatican City State law created by Pope Francis in 2013, those who are convicted of possession and/or distribution of child pornography can be fined up to 50,000 Euros and be imprisoned for up to 12 years.

The Holy See recalled Capella from the U.S. last year after it was informed by the U.S. State Department that the priest was suspected of having violated child pornography laws.

Federal prosecutors wished Capella to be stripped of diplomatic immunity so that he could be prosecuted under U.S. law, but the Vatican exercised its right to recall the priest and to try him in its own courts.

Canadian police later announced that they had issued an arrest warrant for Capella for accessing, possessing, and distributing child pornography while spending time at a place of worship in Windsor, Ontario.

Capella reportedly will now face trial in an ecclesiastical court that could lead his suspension or permanent removal from the priesthood.

The conviction of Capella follows several high-visibility scandals that have troubled Pope Francis and the Vatican in recent months.

Following severe criticism of Pope Francis by Chileans for defending a bishop accused of permitting the sexual abuse of minors in Chile and for failing to respond to witness testimony against the bishop, the pontiff recently reversed his stance, accepting the resignation of several Chilean bishops connected to sexual abuse scandals. He is now emphasizing that bishops should be careful to exclude homosexuals from seminaries.

On June 20, Cardinal Timothy Dolan of New York issued an announcement that Cardinal Theodore McCarrick, the former archbishop of Washington, D.C., had been suspended from the public exercise of the priesthood because of “credible and substantiated” allegations against him of child sexual abuse.

In February, a judge on the Roman Rota, the second-highest court of the Holy See, was removed from office after pleading guilty to possession of child pornography. The judge, Msgr. Pietro Amenta, was arrested by Italian police after being accused of grabbing the genitals of an 18-year-old in a public place, and officers reportedly found 80 pornographic images on his cell phone, including images of minors.

Amenta received only a suspended sentence from the Holy See. The priest reportedly had been charged with obscenity and sexual molestation in the 1990s and 2000s, respectively, but was not convicted.