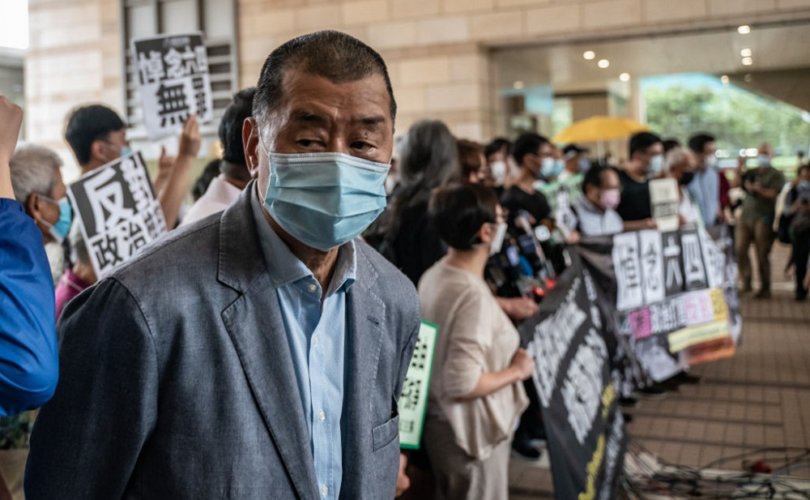 December 9, 2020, (LifeSiteNews) — Last Wednesday, prominent Catholic media mogul Jimmy Lai was arrested in Hong Kong after allegedly committing fraud relating to the illicit use of his company’s property. This is the second time this year Lai has been arrested under suspicious circumstances. The first time, the authorities alleged that he had violated sections of the newly passed National Security Law. He was released on bail shortly after the first arrest but was denied bail on the new fraud charges.

Around the world, many activists and public servants have come forward to express their consternation at the news of Lai’s arrest, with the U.K.’s foreign secretary, Dominic Raab, demanding that “the Hong Kong and Beijing authorities bring an end to their campaign to stifle opposition.”

With all of the hype generated around the apparent breach of human rights and abuse of power by China’s CCP, one might expect a denunciation to come from the Vatican; after all, Lai is a baptized Catholic. Furthermore, Pope Francis has been an outspoken critic of causes he believes to be out of step with the Gospel teaching, such as converting Protestants to the Catholic faith. Nor does he shy away from making his political views known, as when he prematurely congratulated Joe Biden on “winning” the presidency. But regarding Lai’s arrest, there has yet been no denunciation. In fact, no murmurings of any kind have emanated from St. Peter’s on the issue.

In an article published yesterday in the Wall Street Journal, William McGurn asks why there have indeed been no comments from the Pontiff on the matter. In the article, McGurn laments the Pope’s double standard on ethical issues whenever it involves China, drawing attention to Francis’s stern words on “American capitalism and Catholic moms who breed ‘like rabbits’” but remaining silent in the wake of Lai’s arrest. Francis did recently criticize the Chinese authorities over their dealings with Muslim Uighurs, neglecting to make comment on Christian persecution in the country.

McGurn posits that the silence from Francis is a direct result of the Vatican-China deal, which “gives the Communist state extraordinary say over the selection of Catholic bishops.” Despite this overreach of the CCP into Church matters and the freedom of religion, the Vatican continues to defend the deal, going so far as to extend it a further two years. Importantly, McGurn notes that “rather than herald a thaw in China’s hostility toward religion, persecution has increased — and not only against Catholics.”

McGurn goes on to say that in China, the faithful have become despondent by the Pope’s lack of interaction with them and public defense on their part: “Hong Kong hearts have been ‘broken’ by the lack of encouragement from the pope amid the protests and mass arrests that have marked their continuing struggle with Beijing.” Cardinal Zen, outspoken critic of China’s persecution against the Catholic Church, said that it “has been 1½ years that we are waiting for a word from Pope Francis, but there is none.”

Zen has also spoken out against the Vatican-China deal in no uncertain terms, declaring it “the murder of the Church in China” and an instance of the Vatican “selling out the Church to China.” In a rare and brief opportunity for Zen to leave Hong Kong earlier this year, he visited the Vatican to meet with Pope Francis, that they might discuss installing a new bishop, having been without an active ordinary in the diocese of Hong Kong for 18 months. Francis claimed to be “very busy,” meaning he couldn’t meet with Zen, but McGurn points out that “the pope did find the time to discuss justice and inequality with an NBA players union delegation, which presented him with a Black Lives Matter T-shirt” just days later.

McGurn closes by drawing a comparison between St. Thomas More’s silence on King Henry VIII’s marriage and Pope Francis’s silence on the evils that face China’s faithful Catholics: equally a cause of enormous uproar, but for Francis, it is “not in an attractive way.”